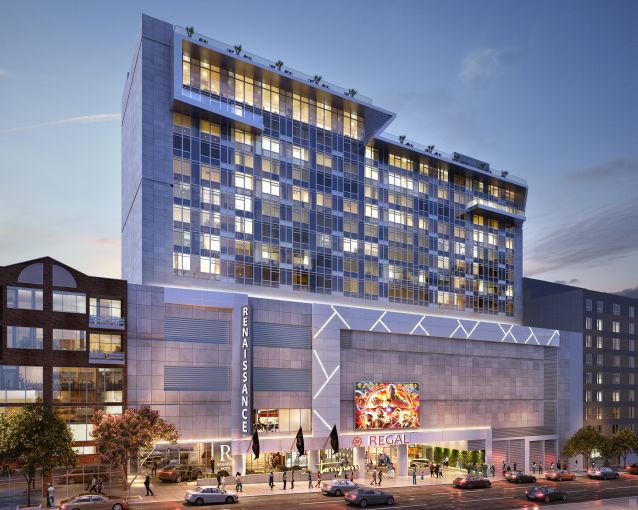 The developers of the 1.2-million-square-foot Tangram mixed-use development under construction in Flushing, Queens, have picked the Marriott International‘s Renaissance Hotels brand for the project’s hotel, Commercial Observer has learned.

The nine-story, 208-room Renaissance New York Flushing Hotel at Tangram will open at SCG America and F&T Group‘s project at 133-15 39th Avenue between College Boulevard and Prince Street at the beginning of 2020, the companies announced. The four-star lodging will mark the brand’s first hotel in Queens. Marriott International’s Noah Silverman, the chief development officer for full-service hotels in North America, praised Tangram in prepared remarks, for creating “a new, vibrant and walkable destination in Queens,” and noted the hotel will target business and leisure travelers.

Winfred Zhang, the president and CEO of SCG America, said in a release that the firms wanted to erect the “best hotel” with “an impressive global lifestyle brand.”

The Renaissance brand appeals to the predominantly Asian community, Zhang told CO. Since it is Marriott’s boutique hotel brand, the developers have a little more freedom with the design of the 124,000-square-foot hotel. Margulies Hoelzli Architecture and Wilson Associates were tapped for the hotel’s architecture and interiors, respectively. That design will include a sky lobby with two bars, a signature restaurant, lounge and 3,500-square-foot outdoor terrace. Zhang said an in-room feature will be a very open layout, with an open vanity and closets.

The hotel will have a private connection directly to the retail, so visitors won’t have have to go outside in order to shop. Hotel guests will also have access to a 60-foot pool, vitality pool, sauna and salt room.

Room rates will exceed the $240- to $250-range found at Hyatt Place Flushing/LaGuardia Airport, part of the F&T-developed One Fulton Square, Zhang said.

Tangram will include 324 luxury residences within two towers (sales launched at one tower in fall 2017 with prices starting at $600,000 for a studio apartment), a 12-story commercial tower with 48 office condominium units (ranging from 1,367 square feet to 3,069 square feet and $1.6 million to $3.4 million), 275,000 square feet of retail and themed restaurants, and a 24,000-square-foot food hall and beer garden operated by F&T. In addition, the complex will house a multiplex. As CO reported in January, Regal Cinemas became the operator of the 34,000-square-foot multiplex with seven cinemas and the first 4DX experience.

Per the announcement, the name and design of Tangram “has been inspired by the traditional Chinese dissection puzzle consisting of flat pieces called tans. Tangram embraces urban-style living, much like world-class Asian cities like Shanghai, Seoul and Tokyo.” One of the features for residents is a one-acre walking garden with a 3,000-square-foot indoor space, called The Pavilion, inspired by traditional Japanese teahouse with lounges and sitting areas for private use.

“There’s a private dining room that people can rent out with a fully equipped pantry and kitchen, and outdoor areas where you can have barbecues so we’re setting up barbecue grills there so that people could use it,” Helen Lee, an executive vice president at F&T, previously told CO. “And then in the main heart of the Pavilion, it’s seating and lounges, but it was inspired by a Japanese teahouse. And then in the back, we just recently had this idea about doing a Japanese rock garden, which I think is so sexy.”