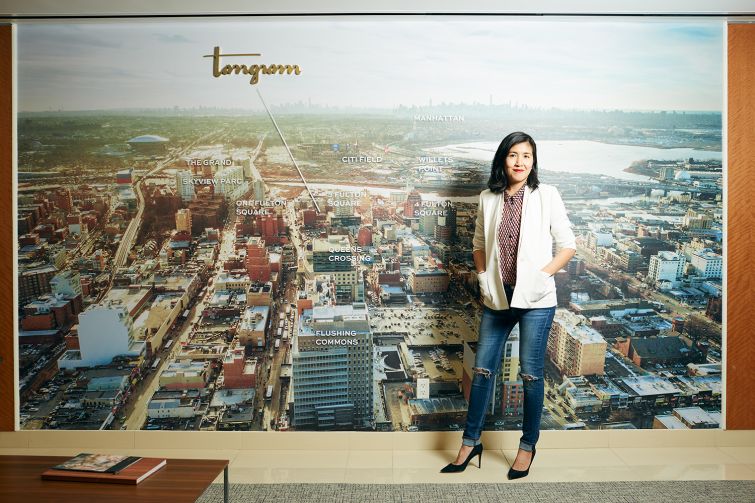 In the wake of the Great Recession, Lee was at development company Onex Real Estate Partners and tasked with selling out the 448 condominium units at the firm’s Flushing’s Sky View Parc.

This was after Related Companies gave it a whirl with little to show.

“A lot of people who were in contract rescinded on their contract,” Lee, a former Onex director, said, of the complex at 40-28 College Point Blvd. (In 2011, Onex reached a settlement with 118 buyers at Sky View Parc to return $3.7 million in down-payment refunds.) “I was kind of in the middle of all that.”

In the 18 months that Related was marketing the units, it only sold four, Lee said. (A Related spokeswoman didn’t respond to a request for comment.)

“My boss, Michael Dana [the president and CEO of Onex], asked me if I wanted to take over the residential sales portion of it.”

She was a logical choice. “I don’t think it makes sense to have somebody that’s not really familiar with this market sell condos,” the 39-year-old said. “We just repositioned the project. We created our own sales team and then we became the best-selling project in 2012, 2013 something like that, two years in a row.”

She definitely possessed Queens cred, having grown up in Jackson Heights, then Elmhurst and eventually Douglaston, after immigrating from Taiwan at age 6. But she had other assets, too, including a master’s in development planning from the Bartlett School of Architecture at University College London and a master’s in real estate from Harvard University.

One central focus of Lee’s since starting at F&T as an executive vice president in February 2014 has been curating retail at the firm’s projects. That included reconceptualizing the 10,600-square-foot Queens Crossing food court at 136-17 39th Avenue in Flushing a couple of years ago. For the last several years she has been focused on Tangram, the 1.2-million-square-foot mixed-used project under development at 133-15 39th Avenue between College Boulevard and Prince Street (the 275,000-square-foot retail portion is at 37-09 College Point Boulevard), also in Flushing.

“I don’t think from a retail sense it should only be these local Asian mom-and-pop stores or only like Asian things,” Lee said. “I would like to curate it in a sense that it’s for everybody but at the same time still retaining its very unique sense of self in this neighborhood.”

F&T has been able to bring in new concepts to New York City like Dan Dan Xiang, opening Nov. 20 in Queens Crossing.

“It’s basically fish balls on a skewer but then it’s boiled for 30 seconds in like a really fragrant broth, kind of like shabu-shabu but seafood and vegetables on a stick.”

Then there’s “a new concept with grilled fish [called] Grill Master,” she said.

Grill Master recently opened at the F&T-developed One Fulton Square at 133-42 39th Avenue in Flushing. “This fish is actually flown in from China, and it has these really special sauces. It always like a huge line you can’t even get in,” she said.

Lee, her husband Richard Siu, the company’s CIO, and their two children, Oliver, 4, and Isabel, 2, live in NoMad today (with the goal of moving soon to Chelsea). But, she noted: “I used to live in Queens. I grew up in Queens. I’m a Queens girl. So I know this area very, very well. I used to take my PSAT, SAT prep courses here on Main Street. I was like co-captain of my ultimate-frisbee team. We practiced at Flushing Meadows [Park]. You know, just things like that—you know the hood. [Today] I’m here practically 80 percent of the time.”

The overlap between cultures was obvious during last week’s interview at the firm’s Queens Crossing office. Lee breezily spoke with the receptionist in a combination of English and Mandarin Chinese.

Her kids are being brought up trilingual, with French as the third language. At home she speaks to her kids in Mandarin, but with Siu she talks in English. Lee said that while she came to the U.S. at age 6, she didn’t speak English until age 9.

“Throughout my whole entire childhood I spoke in Mandarin to my family, to our relatives,” Lee said. “I only watched Asian TV shows, movies, pop stars. I don’t think I necessarily—with the exception of [loving] New Kids on the Block and Debbie Gibson—was your typical American kid. So, not only am I bilingual, I’m also bicultural in a way. I think that this neighborhood is ready for a very different viewpoint, which is what I’m trying to bring for Tangram.”

She helped change the overall direction of Tangram—being developed along with SCG America—and if it ends up a success, Lee said that it would be the biggest accomplishment of her career.

“The funny thing is I always joke about this but in a way it’s true, Tangram’s sort of like my first baby because when we first started conceiving it, that was when I was pregnant with Oliver.”

Tangram was slated to include a four-story open-air retail mall with residential condos on top.

“We looked at it,” Lee said. “This was when I first joined the company. And I just didn’t think that made sense. I don’t think the retail would have survived in that way. It would have literally been like One Fulton Square, but like instead of three levels it would have been four levels with this passageway through it. I mean can you just imagine the wind tunnel?”

She also was instrumental in changing the original design, which was going to be with brick and steel, a la industrial Brooklyn. So she hired a retail designer. (Previously the firm had been using one architecture firm to handle everything.)

Human resources is actually a part of her job running the day-to-day operation of the company, co-founded by her father Michael Lee and Sunny Chiu in 1996 (both Taiwanese immigrants), along with her husband and Chiu’s 30-year-old son, Alex Chiu (for whom Helen Lee babysat.)

About two-and-half years ago, she brought on board Dan Mazzarini and his firm BHDM Design for the interior design of the retail portion of Tangram, which includes a futuristic food hall and beer garden Mazzarini has dubbed Blade Runner Night Market

“A lot of these Asian cities there are these night markets for food,” the interior designer said. “We took a futuristic spin on it and Helen said to go further, go further.” And to obtain that Asian night food hall vibe, Lee sent Mazzarini to Shanghai and Taiwan on a “research trip” to “understand the current take and Asian perspective on food halls and retail,” he said.

Mazzarini said that Lee is “both big picture and nuts and bolts.” So she can understand how to create an “overarching narrative” for the retail, while also developing it in a way that suits the individual vendors. (The retail portion is in construction with a slated opening date in third-quarter 2019.)

While Siu and Alex Chiu pop in here and there for meetings with BHDM, and Lee’s dad has shown up for a ribbon cutting and one meeting, Lee has been the boots-on-the-ground leader of Tangram.

Mazzarini’s sense is that her father has “allowed her to be the mastermind of this project in a really meaningful way.”

Lee learned firsthand about the world of real estate.

Her first job in the industry was selling the 72 residential condo units at F&T’s Colden Garden at 4231 Colden Street in Flushing. She was 18 and had obtained her real estate license the summer after graduating from the elite Bronx High School of Science.

“I kind of grew up in this world,” Lee said. “I mean my childhood was very much about real estate and construction. F&T wasn’t always a development company. It started off as a construction company so when I was little I got dragged around to construction sites on the weekends. You know, like Disney World wasn’t really Disney World. We went there looking at timeshares—like how to acquire [them]. So, I think in some way it all kind of led back to [me working at F&T]. But I feel very comfortable in what I’m doing because I think I’m also bringing in something different from what my parents thought Flushing could be.”

Beyond the retail, Lee has been invested in upping the quality of F&T’s various offerings.

For Tangram’s 324 residential condominium units, for example, the company is installing Miele kitchen appliances, although being careful not to use the higher-end options.

“We’re the first ones in the area to use Miele,” she said. “And we negotiated a really, really good price with them. And I felt that if we wanted to set ourselves apart from the other product in the market we have to go above and beyond in terms of the quality.” And people have been willing to pay for it.

At the 192-unit Tangram House South, one of two residential condo towers slated for the project (there will also be a 12-story office condominium), sales launched last fall. Prices there for a studio start at $600,000 and for a three-bedroom start at $1.9 million. At the high end, Lee said, penthouses and studios are selling for $1,400 or more per foot. Pricing hasn’t yet been released for the second residential tower, Tangram House West.

One big deal for Tangram is that CJ CGV, a South Korean cinema chain, will open a 34,000-square-foot seven-auditorium 4D-movie multiplex, as CO has reported. CGV Tangram Flushing will include the first 4DX location—which includes motion vibration and environmental effects such as wind and rain—in Queens, and the first ScreenX auditorium—described as providing a “270-degree panoramic theater experience, extending the screen visuals to the left and right”—in the city.

Contemplating what type of theater to include in the project got Lee interested in cinema more broadly.

F&T is on the Flushing Willets Point Corona LDC, whose president and CEO is former Queens Borough President Claire Shulman. Shulman met the Lee clan and about four years ago thought Helen Lee would be a good candidate for the board of the Museum of the Moving Image, on which Shulman serves. Since 2014, Lee has been on the board of trustees for the Astoria-based organization.

It’s been in the last couple of years that Lee has really gained an appreciation of the mission of the museum.

“I wasn’t sure that I wanted to be involved with it but I’m so glad that I did in hindsight,” Lee said. “I’m just really passionate about what’s happening at the museum. One of the initiatives we are working on is how to widen its appeal. We’re doing this thing with Crazy Rich Asians with Warner Bros. talking about how to get the principal cast out here so we can do a post-screening talk.”

Shulman said Lee was a great nomination. “She’s a very smart young woman. She’s young and energetic and has an interest in the cultural life of the community,” the former Beep said. And she and her husband, Shulman added, are “economically comfortable” enough to financially support the cause. Next up for the museum: the annual gala on Dec. 3, this year honoring actress Glenn Close. (Tickets go for $1,500 a piece.)

“Young people like Helen and her husband are the future,” Shulman said.