Now Was the Time for Brookfield’s Oaktree Acquisition

‘Tis the season for mergers and acquisitions.

The transaction is expected to wrap in the third quarter and will create a new market behemoth with a combined $475 billion in assets under management.

Eat your heart out, Blackstone. (Which has a pitiful $472 billion under management, per Blackstone’s website.)

“This kind of thing makes a ton of sense for big asset managers like them—marrying their real estate business with the credit side,” one president of a significant real estate investment trust, who requested anonymity, told CO. “It’s easy to see the business logic. You also get the economies of scale from cutting a lot of the overlapping costs between the two companies.

“Each firm has their own relationships with different institutional investors; the hard part is getting to those investors,” the REIT president added. “Once you are in, you can sell the multiple products and this will allow them to significantly increase the number of people who would invest in each platform.”

The current economic backdrop and the fact that each firm’s stock has performed relatively well, or has been stable since the start of the year, hints at the underlying strength of the two shops currently, which could’ve played a role in the timing of the sale, according to some REIT analysts.

“In our industry we can’t always generate steady results and that’s what the markets want,” one person involved in the sale to Brookfield told the Financial Times. “It has not been a great success. Maybe our companies are not suited for public ownership.”

Some of the world’s most recognizable equity shops such as Blackstone, KKR, The Carlyle Group and Apollo Asset Management have grown their debt businesses exponentially over the last couple of years, which Brookfield has essentially countered with this expansion.

While real estate is the crux of its business, Brookfield has a presence in infrastructure and renewable energy. In the last year, the firm helped fuel the record volume of M&A activity and added to its real estate prowess with the $13 billion purchase of major mall owner GGP and the $6.7 billion buy of Forest City Realty Trust—in November 2018, it also unloaded $13.2 billion to purchase the “power solutions” business from Johnson Controls, which supplies batteries for about a third of cars globally.

In response to a question on why shops positioned as well as Brookfield might be aiming for consolidation at this stage in the business cycle, Mizuho Securities USA Chief Economist Steven Ricchiuto said, “The answer is that, A: They’re looking at [asset] prices being high. And, B: They’re seeing [over]supply issues. They’re saying, ‘Maybe I’d do better if I took someone else’s portfolio and tried to manage it better [rather than do new development].’”

Brookfield CEO Bruce Flatt told Bloomberg that the deal allowed it to broaden its product offerings at a time when he’s seeing institutional investors doling out capital to a smaller pool of firms who can meet strict mandates. “This transaction enables us to broaden our product offering to include one of the finest credit platforms in the world, which has a value-driven, contrarian investment style, consistent with ours,” Flatt said in a prepared statement.

By 2029, Brookfield could own 100 percent of Oaktree, pursuant to a liquidity schedule outlined in the sale. Oaktree will continue operating independently, led by Co-Chairman Howard Marks, Co-Chairman and CIO Bruce Karsh and CEO Jay Wintrob. Marks will join Brookfield’s board of directors.

Some of Brookfield’s most renowned holdings include the Far West Side development, Manhattan West, as well as Brookfield Place.

Representatives for Oaktree as well as Brookfield did not immediately respond to a request for comment.

With additional reporting from Matt Grossman. 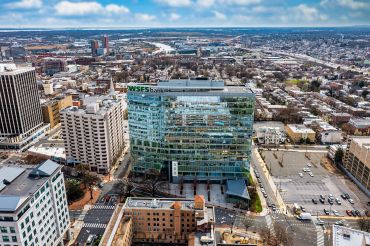