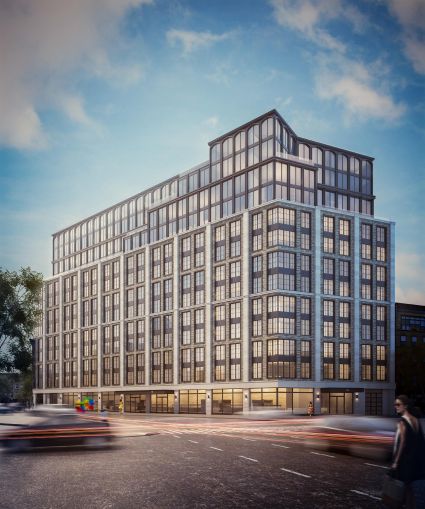 Happy Living—led by principals Rachel Medalie, Levi Balkany and Naftali Lichtenstein—has laid the foundation for the 13-story, 211,893-square-foot asset and construction is expected to wrap by year-end 2020.

When completed, the building will comprise 155 condominium units, ground-floor retail—to be occupied by a Fresh Food grocery store—and parking spaces. Building amenities are set to include a rooftop lounge, fitness facilities, a yoga room, a children’s play area, a 55-foot lap pool, an 80-space bicycle parking area and a party room.

“This was a standout opportunity to support a highly experienced sponsor building a high-quality, centrally-located asset in prime West Harlem,” Josh Zegen, a co-founder and managing principal of MRC, said. “The financing allows the developer to secure the asset, go vertical very quickly and successfully complete the project within 18 months.”

Located on the corner of St. Nicholas Avenue, the property consists of two adjacent lots running from West 121st to West 122nd Street.

Happy Living acquired the site for around $70 million from RWN Real Estate Partners in 2017, as first reported by The Real Deal. Its previous owner, Hans Futterman, defaulted on a $37 million loan from RWN in June 2016 and the lender had the winning credit bid at its bankruptcy auction. RWN sold the site to Crown Heights-based Happy Living—also a bidder at the auction—shortly thereafter.

When RWN entered the sales contract with Happy Living it allowed the buyer to use the roughly year-long closing time to start building the property, saving Happy Living significant carrying costs.

Additionally, a significant amount of brownfield tax credits were included in the initial deal and preserved in the bankruptcy. Happy Living was able to capitalize on those credits and fill a void in the capital stack by bringing Enhanced Capital into the deal, who provided an $18 million mezzanine loan secured by the brownfield tax credits, Jon Burckin, a principal at Enhanced Capital, confirmed.

The project is in good company and the latest development amid a buzz of activity in West Harlem. New properties benefit from a number of demand drivers, including the expansion of Columbia University and the ever-increasing number of retailers moving to the neighborhood, such as Whole Foods, which opened at Jeff Sutton’s 100 West 125th Street in 2017.

It joins Savanna’s Vandewater 32-story condo building at 543 West 122nd Street among others, but from a sales standpoint, 300 West 122nd is at the more affordable end of the spectrum, Zegen said.

“This is a terrific project and I am delighted that Happy Living Development provided me with the opportunity to work together,” Richard Horowitz told CO. “It was a pleasure working yet again with Madison Realty Capital, which was the target lending source to meet the needs of the borrower. I wish everyone success in the development of this high-end retail and residential condominium.”

Zegen said the highly structured nature of the transaction represents a wider market trend: “We’re a special situations investor, we’re a construction lender and we work on various types of structured financings. In today’s market you really need [deal participants] who understand all the moving pieces of a transaction in order to be able to work together in the sand box with all the different players.”

Officials at Happy Living could not immediately be reached for comment.