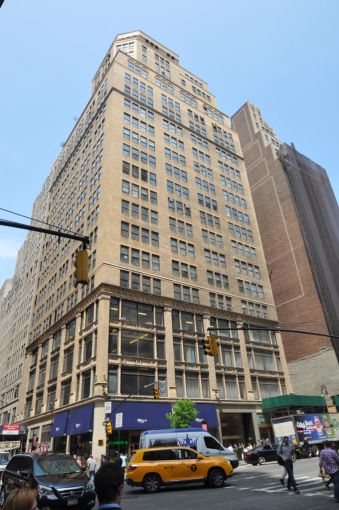 Knotel signed two leases for a total of 19,974 square feet on Eighth Avenue in the Garment District, Commercial Observer has learned.

The flex office company inked a five-year deal for an 11,400-square-foot lease at East End Capital’s 580 Eighth Avenue, where they’ll occupy the 15th, 16th and 18th floors of the 21-story building.

Asking rents were $54 per square foot, according to Alex Kantor, who represented East End Capital in-house. East End bought the building in December 2018 for $17.7 million, according to property records, and the new ownership has begun a capital improvement project on the 1920s-era building, Kantor said.

The Knotel deal “speaks to the fact that the Garment District is starting to become a more sophisticated market,” Kantor said.

The firm also signed a lease for 8,574 square feet across the street, at Olmstead Properties’ 575 Eighth Avenue, where they will occupy the 20th floor of the 24-story office building.

Daniel Breiman represented Olmstead Properties in house, and Knotel represented itself, according to information from Knotel.

The two buildings are both located between West 38th Street and West 39th Streets.

In February, Knotel moved its headquarters from Tribeca to Midtown, where they occupy a 51,000-square-foot space at the former New York Times building at 229 West 43rd Street.

A spokesperson for Knotel declined to provide lease terms or asking rents. Olmstead Properties did not return request for comment. (Disclosure: Observer Capital, led by Observer Media Chairman and Publisher Joseph Meyer, is a Knotel investor.)