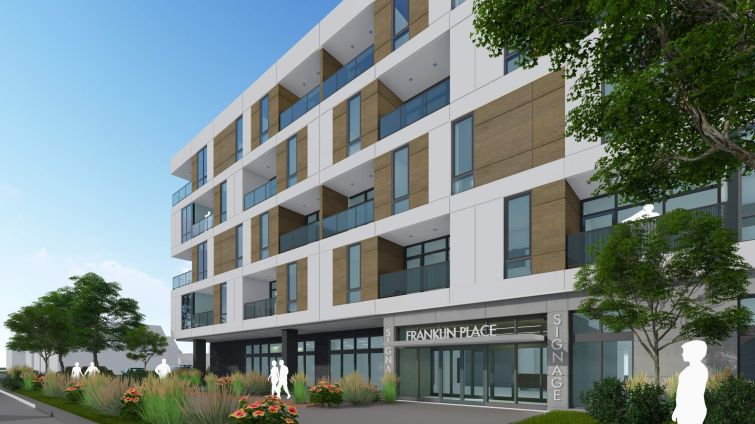 An early rendering of The Easton. Courtesy: NKF

The proceeds help fund remaining costs, as the borrower wraps construction, and comes prior to the building’s stabilization and receipt of a temporary certificate of occupancy (TCO), which Klein Development President Michael Klein told CO the firm is expecting to receive next week, on March 13.

“Klein Development is one of the region’s premier developers and operators. They have an acute understanding of the market and successful track record spanning decades,” Stolly said in a statement. “This pre-TCO financing repatriated equity while funding remaining costs as the property stabilizes.”

The Easton—designed by Milwaukee-based Eppstein Uhen Architects—is at 1632 North Franklin Place, just north of Milwaukee’s downtown on the city’s east side. The 157,000-square-foot development stands at five-stories, comprises 96 residences and costed around $20 million to build.

Of the building’s 96 market-rate apartments, 64 are one-bedrooms and 32 are two-bedroom, two-bathroom units, Michael Klein said. The one bedrooms range in size from 726 to 813 square feet, while the two-bedrooms are 1,009 to 1,132 square feet, according to the property’s website.

In August 2015, Klein Development acquired what was then the site of a defunct Boys and Girls Club, demolished the existing building and moved to build a 12-story, 160-unit project, according to Klein. It required a zoning variance from the city and ran into opposition from local residents over its scale, which Klein said led to “some raucous neighborhood meetings.”

The zoning variance was approved in May 2017 as Klein trimmed the project to five stories. After the “lengthy” 18-month process, it was zoned as a Planned Unit Development (PUD), allowing Klein to meet community density and land-use goals without being bound by existing zoning requirements.

Nearby the project is a city-backed, 23-story seniors housing facility that’s surrounded by other buildings that are four or fewer stories.

Amenities at The Easton include a fitness center, yoga and club rooms, a business center, bike storage and heated ground level and subterranean parking.

Similarly, in January, CO first reported news that Pine River had also provided a separate $23 million loan to Klein and joint venture partner Millennial Partners to refinance Vantage on the Park, a recently redeveloped 96-unit luxury apartment building at 916 East State Street in downtown Milwaukee. The same NKF team that brokered the debt on The Easton also negotiated the Vantage on the Park refinance on behalf of Klein.

A representative for Pine River did not immediately provide a comment.