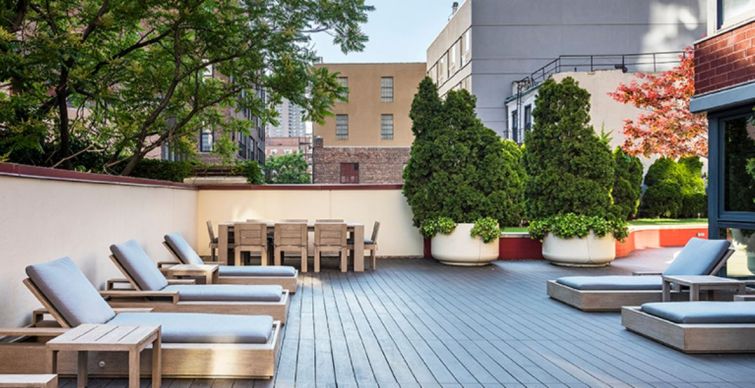 An outdoor deck at The Nicole. Photo: Greystone Bassuk

In the first of two deals arranged by Greystone Bassuk, Greystone‘s debt-advisory arm, Wells delivered a $125 million permanent financing for Atlas New York, a 48-story, 373-unit tower at 66 West 38th Street, at the corner of Avenue of the Americas. Gotham also nabbed a $59 million loan to refinance The Nicole, a 19-story Hell’s Kitchen building with 149 apartments, at 400 West 55th Street.

Each debt package carries a 15-year term, with a combination of fixed- and floating-rate components. The deals were structured as direct purchases of bonds from the New York State Housing Finance Agency and the New York City Housing Development Corporation, replacing about $140 million in previous variable-rate bond credit enhancements from Fannie Mae in the process.

“Gotham Organization has a strong vision for the Nicole and Atlas—including providing affordable housing that is much needed in New York,” Alan Wiener, head of Wells Fargo Multifamily Lending, said in an email. “Wells Fargo was pleased to support that vision by providing the refinancing loans for the properties.”

“The Nicole and Atlas New York are perfect examples of well-designed, well-managed assets that continue to be market leaders in an increasingly competitive landscape,” Fletcher said in a statement.

Both buildings participate in New York City’s 80-20 program, which sets aside a fifth of each tower’s apartments for lower-income renters. Gotham says it has just finished in-depth renovations at both properties, which were built in 2002 and 2003. Combined, the buildings include nearly 100,000 square feet of commercial space: At The Nicole, a preschool and a Chase bank branch are among the retail tenants, while at Atlas, a GNC vitamins store and a gem merchant share the frontage with a shop that sells lace and ribbons. The building also has an 18,000-square-foot parking garage.

In February, four one-bedroom units in Atlas have rented to new tenants at prices between $3,895 and $4,025 per month, according to data from StreetEasy. At The Nicole this month, tenants have nabbed one-bedrooms for between $3,595 and $3,795, while two-bedroom apartments have gone for as high as $6,295 per month.

David Picket, Gotham’s president, reported that getting the two deals done in tandem took some doing. “Both of these loans required creativity, tenacity and cohesion among the various stakeholders,” Picket said in a statement. “The Greystone Bassuk team delivered an execution that exceeded our expectations.”