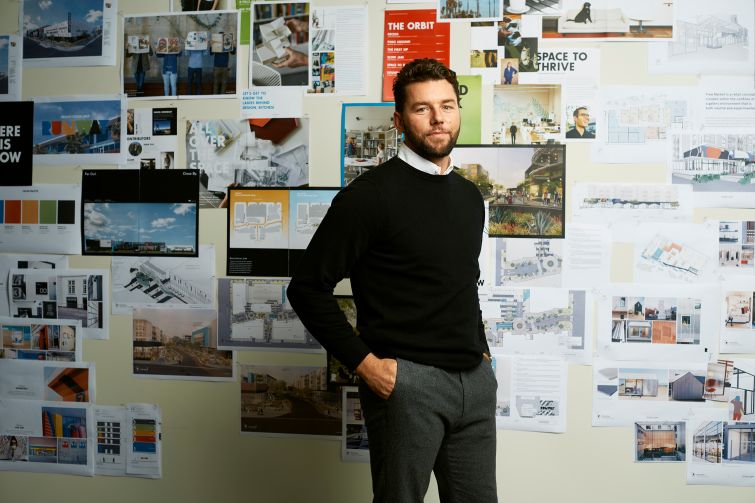 For Stenn Parton, retail is far from dead but it’s still in need of some serious pruning.

But that oft-repeated observation does not keep the 32-year-old chief retail officer for San José-headquartered DJM Capital up at night. He finds the necessary contraction of the physical retail space both long overdue and exciting.

“The current environment is forcing landlords and owners and developers to innovate for the first time, which is great,” he said from a café at Whole Foods at The Runway. DJM was brought on board by Invesco Real Estate, which purchased the property in 2016 for $475 million, to develop, manage, lease, market and brand the 14-acre The Runway in Playa Vista located in the heart of Silicon Beach on the Los Angeles Westside.

Parton has been a passionate student of the retail real estate business since he was a teenager growing up in tony coastal town of Santa Barbara. The then-13-year-old accompanied his father, Lindsay Parton, founder of Parton & Edwards Construction, during Saturday breakfast meetings with the likes of Herb Simon, founder of Simon Malls. “As many Saturdays as I could go, all through high school, I would be there. I loved it. I got this really unique access to the real estate and retail business at a young age,” he said.

The meetings and mentorship of Simon influenced his father to transition from a successful 30-year career in construction development to retail property acquisition and his current role as president of DJM Capital, which was founded by his longtime friend, John Miller. The privately funded real estate firm specializes in acquiring, repositioning and operating commercial properties, with a focus on retail in the Western United States.

Before joining the firm himself, Stenn co-founded menswear brand Apolis with his brothers Raan and Shea. The direct-to-consumer brand, focused on ethically sourced goods, is behind the ubiquitous customizable jute market totes.

A graduate of the University of Southern California, Parton lives in Venice with his wife, three-year-old daughter and infant son. He spoke to CO about the future of retail, the four attributes needed to create truly experiential retail and what’s next for the firm, which is behind eight major mall redevelopments in coastal communities throughout Southern California, including The Runway.

Commercial Observer: In your experience, what works for retail?

Stenn Parton: Retail has been its own worst enemy for a long time. There has been very little innovation in the physical space. Landlords have been willing to do things the same old way they’ve done them while people’s spending habits were changing and the time to adapt and evolve needed to start to occur.

Last year I think we [in the United States] had almost 8,600 retail stores close, which was the most stores that have closed in the history of retail. There is going to be less and less retail in the U.S. There just has to be. But, as there is less and less, what’s left is going to be more important than ever.

Do you think the rise of Amazon and e-commerce has forced landlords to have to admit the old way is not working?

People’s spending habits are changing. This is something significant that is happening here. I look at my own shopping habits—my family, my wife, myself, all of my friends—at how much of our shopping we do online. We still shop within the physical space, but we’re much more selective about where we’re going to go to shop. It’s got to be somewhere that’s interesting, that’s exciting, that’s different, that has the experience that we want, where we want to spend our time.

You said that people are still interested in physical retail. What are they looking for? What brings them out to the mall?

Experience is more important today than ever before. People talk about experience a lot, but what does that mean? The first thing we look at is four key features.

The first is location and density. For a retail property to be made experiential, it’s got to have density and the right demographics.

It’s also got to have a story-worthy setting. There has to be something that you can play off of. In our Pacific City project, we had the Huntington Beach Pier. You’re looking at the Pacific Ocean. It’s Surf City U.S.A. For Lido Village, we’re right on the Huntington Harbor, with 47 boat slips in front of it. You can come by boat, you can ride a bike, you can drive. It’s a very interesting environment and location to craft a story.

And this, [The Runway], is at the heart of Silicon Beach. You have Google, which is a block away, you have Facebook, you have everything that’s happening in tech and innovation in L.A. here. So that’s a story worthy setting.

Third, which I think is almost as important as anything, is public space. You have to have public space because that gives you the ability to fabricate foot traffic through programming. You have to have some sort of space where you can bring in live entertainment, beer and wine festivals, farmers markets, kids’ clubs, concert series, all these different activations that give people a reason to show up to shop because it’s going to be an experience they’re going to have that you can’t replicate online. That’s where you start to have the ability to create community. You create a reason for people to show up that they couldn’t get elsewhere.

And the fourth thing that we see is this range in merchandising. It’s understanding that in today’s retail world, you look at how most people shop. They have become so smart at pricing. They have become so smart when they look at sourcing, where the product has been made. Just because somebody wears Warby Parker eyewear doesn’t mean they don’t want to wear Valentino shoes. It’s understanding how we can create this range in merchandising.

You’ve said that one of the great saviors of retail is public space. Can you go into that a bit?

Public space is a great savior for retail as long as it has thoughtful programming. In our projects, we’re on base to produce 1,250 activations and events at all of our projects. Every day we have a concert going on, we’ll have a speaker series, a movie. That’s where public space gives these retail projects an advantage.

Have you done any studies on how much incorporating experiential retail impacts sales?

Yeah. In Lido, we will have a year-to-date 32 percent increase in project sales and a substantial increase in foot traffic.

When you talk about public space, I read you wanted to make Runway car-free.

That’s what the Los Angeles Times wrote, but there’s still going to be lots of cars. It’s just realizing that the way people come to these projects is different. There’s much more of a focus on food at today’s retail environments. In the old days of Simon and Westfield, the old malls had 5 percent or less of food and beverage. You didn’t want food because it kept people there too long; you wanted turnover in the parking. You wanted to get them out of the mall.

Now, at our retail projects we find the sweet spot is about 30 percent of your total retail leasable area should be food and beverage; that’s about the maximum we want to have. People are eating out more. Millennials are spending more on eating out than travel so let’s figure out how to have a really thoughtful dining experience.

Not only are people eating out more, they are taking shared ride services. So, in our projects we’re not seeing necessarily the same amount of parking [needs].

Is this Southern California and western market focus going to continue or are you going to branch out?

Our goal in the next few years is really the Western United States. The Bay Area, the Pacific Northwest, in particular Seattle, Denver and all of Southern California and then Texas, we’ll be looking at Austin and Dallas.

Our focus will be putting our retail expertise into acquiring pure retail projects where their future won’t be a pure retail property. We will be downsizing on the retail and turning it into a mixed-use environment. Runway is a great example. We have just over 500 apartments. We have 230,000 square feet of retail and 30,000 square feet of creative office. It’s a really healthy size mixed-use environment, but the retail, the success of the retail is what creates incremental value for the office and multifamily. If the retail is really thoughtful, if the retail is really good, that’s the ground floor that drives value for everything else.