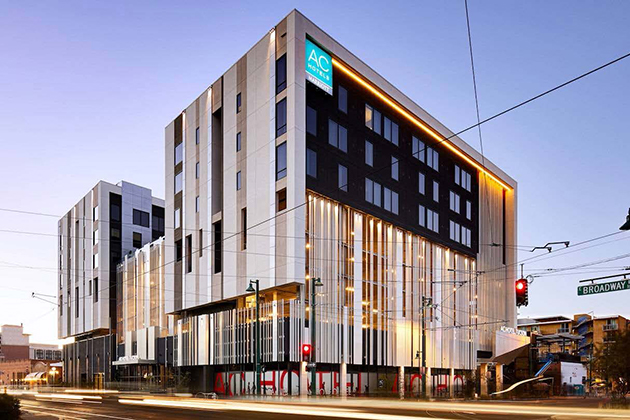 Tucson Urban has pulled in a $40 million commercial mortgage-backed securities loan to refinance a recently opened hotel in Tucson, Ariz., according to Walker & Dunlop, which arranged the financing.

The brokerage firm declined to identify the lender, but a source close to the transaction said that Deutsche Bank is the institution behind the 10-year, fixed-rate debt.

When it started taking reservations in 2017, the lodging, the AC by Marriott Tucson Downtown at 151 East Broadway Boulevard, became the first new hotel to open its doors in Tucson in almost half a century. Tucson Urban, led by Scott Stiteler, is already at work on another hotel on an adjacent corner.

“Despite the volatility in the CMBS market during the last two months of 2018, Walker & Dunlop delivered exceptional attention to our loan, our needs and our timing,” Stiteler said in a statement.

The eight-story hotel, embedded in the central business district of Arizona’s second-largest city, stands about a mile southwest of the University of Arizona. Its first four stories are a parking garage used by hotel guests and local shoppers, while the building’s upper half comprises 136 guest rooms. The AC by Marriott brand, founded eight years ago, is a limited-service concept geared toward business travel. Food service is a breakfast buffet with otherwise sparse dining options.

Jim Pierson and Keaton Merrell, who work in Phoenix, and Alison Williams and Matt Baldwin, from W&D’s Tampa, Fla. office, worked to broker the debt. Though the financing would have ideally come from a more flexible life insurer, Pierson said, CMBS proved a worthy alternative.

“We went to the market and would have loved to have lined up with a life company, but life companies generally want three or more years of operation before they’ll play. Some wanted 10 years,” Pierson said. “The reason you go with CMBS is usually [because CMBS lenders are] more aggressive on proceeds. And, we got three years of an interest-only [structure].”

Demand for nightly rooms in the city is on the rise, Pierson said, and stems from the arrival of new companies in the area.

“There’s been a lot of new employers that have come to downtown: Caterpillar, among others,” he noted. The construction company is spending $58 million on a new mining center in Tucson set to open this year, according to a local news station. Amazon is also at work on a fulfillment center in the city, which the e-commerce giant says will employ 1,500 workers.

College sports are another draw.

“I have two children that have gone to school [at the University of Arizona],” Pierson said. “We walked to one of the football games from the hotel.”

The AC’s first years have been a success, but the pair of Stiteler lodgings in central Tucson face competition much older inn: Hotel Congress, at the corner of Congress Street and North Fifth Avenue. John Dillinger and his gang stayed at that hundred-year-old hotel in 1934 when a fire at the property led to their capture.