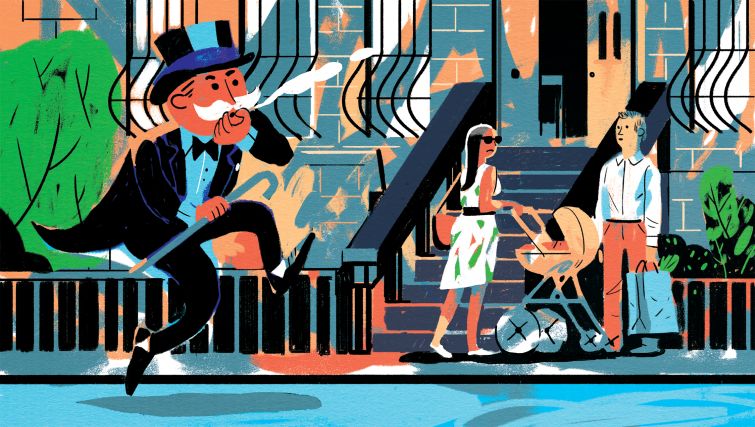 At the end of 2017, Mayor Bill de Blasio quietly signed into law a powerful piece of anti-harassment legislation that allowed the city to flag landlords most likely to harass tenants and force them to go through a lengthy process before they can do major renovation work on their properties.

The law was a dramatic expansion of the city’s 40-year-old certification-of-no-harassment (CONH) program, which has applied to apartment buildings located in a handful of special districts and to single-room occupancy (SRO) properties anywhere in the five boroughs. SROs are a fast-disappearing form of rent-stabilized housing with their small, one-room apartments—often just big enough for a bed and a desk—and shared bathrooms and kitchens on each floor. The tenants who occupied SROs were traditionally seen as poorer and more vulnerable to displacement, hence the need for a special program. The new version of the CONH initiative applies to all kinds of multifamily buildings throughout the five boroughs. And since it went into effect last September, landlords, lawyers and investment sales brokers are raising concerns about the policy. They argue it creates unnecessary hurdles for law-abiding owners of apartment buildings in gentrifying neighborhoods.

Harassment can be any behavior from a landlord that’s intended to drive out tenants, including aggressive buyout offers, failure to provide basic services or repairs, illegal lockouts, unnecessary construction and frivolous lawsuits, according to city law.

The original version of the CONH policy was crafted to prevent landlords with a history of harassing tenants from redeveloping their properties and pushing more renters out in the process. But it often creates a significant bureaucratic obstacle for buyers who purchase an SRO or a property in one of the special anti-harassment districts, which encompass parts of Hell’s Kitchen, Hudson Yards, West Chelsea—all in Manhattan—and Brooklyn’s Greenpoint and Williamsburg. Before renovating or demolishing a building that falls into one of these categories, a landlord has to submit a 20-page application to the city’s Department of Housing Preservation and Development. Then HPD conducts an investigation—which lasts nine months to a year on average, but can take much longer—and attempts to find and interview tenants who have lived in the building within the past three years. If they don’t report any instances of harassment, HPD issues the CONH, and the owner can get permits for renovation or demolition. (Landlords can also skirt this process by leaving a building vacant for three years.)

In the best-case scenario, in which no one is living in the building, the CONH process still takes at least six months, said Luise Barrack, a real estate lawyer at Rosenberg & Estis. “Even if you send it all wrapped up to [HPD] and have everyone who resided there sign statements of surrender saying they weren’t harassed they still have to go through that process,” she explained. And meanwhile, “You’re going to be sitting with vacant space you can’t renovate and you can’t market. I think that can be a very frustrating circumstance for landlords that are trying to comply with the law and better the city’s housing stock.”

Some activists and housing lawyers think the original CONH program is flawed and ineffective at preventing harassment, because it attempts to investigate conduct long after the fact, often involving tenants who moved away years prior. HPD’s ability to discover harassment “depends primarily upon current tenants coming forward to provide information to its staff,” noted Brian Sullivan of MFY Legal Services (now Mobilization for Justice) and Jonathan Burke of Community Legal Aid in a 2013 CUNY Law Review article. “Harassment, by definition, involves conduct designed to force tenants to forfeit their rights—and generally (at least in the conversion context) to move out. A contradiction is, therefore, built into the very base of the program. If a landlord is successful in harassing its tenants, those tenants will probably no longer live at the building and will be difficult for HPD to reach…In many cases, HPD can prove harassment occurred only where it was unsuccessful.”

The new iteration of the CONH program attempts to replicate that investigation process on a much larger scale. The 2017 legislation forced three city agencies—the Department of Buildings, HPD and the Department of Finance—to cobble together a public list of 1,000 properties throughout the city where housing officials think harassment is likely to occur. Under the three-year-long pilot program that began last September, the city creates a score for each building located in any area rezoned by the de Blasio administration and in 11 community boards where the officials worry landlords have incentives to displace tenants. The Building Qualification Index (BQI), as it’s known, incorporates several factors, like the number of times a building has sold, the number of open and closed housing code violations, and paid and emergency repair charges to the city. With the expanded program, HPD can investigate the past five years of tenants, violations and sales, rather than only three years for buildings regulated by the original CONH policy. Properties with high enough scores are on the list, which is publicly posted on HPD’s website. The scores, however, are not public—a fact that irks landlord lawyers.

An HPD spokesman called the expanded CONH policy “a collaborative and data-driven process that’s designed to prevent harassment in targeted areas, keep New Yorkers in their homes and preserve the affordability of neighborhoods. The list, and the criteria to be on it, are all publicly available.”

Some issues can land a building on the CONH list regardless of where it’s located, including being hit with a full vacate order by the DOB in the past five years or placed in the city’s Alternative Enforcement Program for particularly neglected buildings since February 2016. Also, any building where a judge or the state has declared harassment occurred in the past five years will find itself on the list.

So, what’s a law-abiding landlord supposed to do if she suddenly finds herself on the certification-of-no-harassment list? If she wants to knock down walls, reconfigure units, remove or add kitchens or bathrooms, get a new certificate of occupancy or demolish any portion of the building, she must go through the CONH process before the DOB will grant her a building permit. If HPD thinks there’s evidence of harassment, it hosts a hearing at the Office of Administrative Trials and Hearings (OATH). Then if the administrative judge decides harassment took place, owners will be denied building permits for five years unless they agree to set aside 25 percent of their building as affordable housing.

Real estate lawyers and brokers argue that owners of buildings on the list are faced with a lengthy and confusing bureaucratic process to do work on their properties.

“For a building owner, especially a smaller building owner, it’s hard to understand what the requirements are for this list and how to get off it,” said John Stewart, an investment sales broker at Marcus & Millichap. “The idea that I have to fill out this long application for a CONH, there’s a fee for each unit I apply for, I have to now add this layer of bureaucracy to that process, that’s going to create all sorts of challenges and delays.”

He added that it was “just another program that pegs the landlord as the villain and assumes that every landlord is going to take advantage or harm tenants for their own gain. I think the response to the program is that it assumes guilt prior to a full investigation. It’s sort of a situation where you have to be defending yourself against the city when you’re trying to take care of building stock that’s more than 100 years old.”

And even worse, lenders and buyers consider being on the list a significant strike against a building.

“There’s a mark on the building,” said Kara Rakowski of Belkin Burden Wenig and Goldman. “For financing purposes, for resale value it’s viewed differently. Many of these buildings, for no apparent reason, are on the list.”

For example, several properties that were vacated in the wake of the 2015 East Village gas explosion are on the list. The owner of one such apartment building called Rakowski last week and didn’t understand why his property was listed, despite having only a handful of non-hazardous building violations. The four-year-old vacate order was to blame.

Some landlords don’t know why their properties are on the CONH list. And the city refuses to disclose specific reasons why apartment buildings get listed, or a property’s BQI score. Rakowski said her firm has filed Freedom of Information Law requests with HPD to no avail.

“There are some buildings we look at [on the list] that have one owner turnover in the last five years and no violations, when a building [in similar condition] across the street is not on the list,” she explained. “There’s a due process right to know why your building is being labelled a certain way. If it’s public knowledge that it’s on the list, then we should be able to know why.”