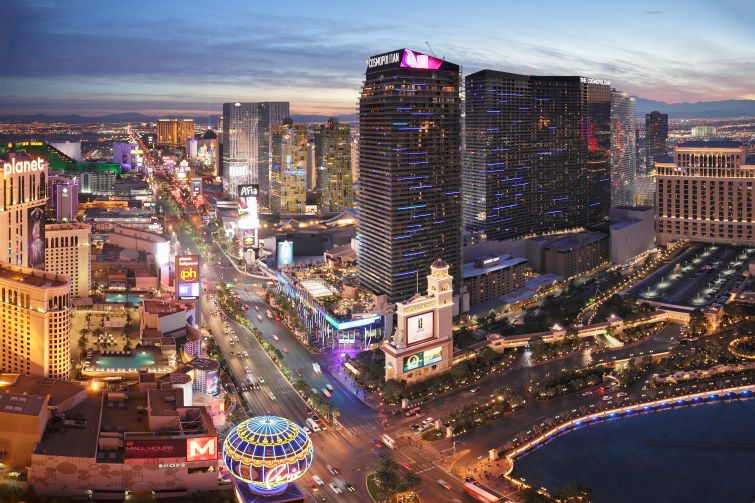 WHERE’S THE ACTION?: It’s in Las Vegas which suffered greatly during the 2008 recession but is luring in developers of all stripes again. Photo: Getty

A decade ago, a lot of developers who came to Las Vegas hoping to make their fortunes in real estate probably would have done better if they had just put the company payroll on the roulette table and hoped for the best.

The financial crisis of 2008 hit Las Vegas hard, affecting real estate development big and small. There were spectacular flameouts, like Bruce Eichner’s 3,000-room Cosmopolitan which Deutsche Bank sank $4 billion into before eventually offloading to the Blackstone Group for $1.7 billion, but there were less prominent yet more tragic real estate follies. The housing market cratered and as late as 2016 The New York Times was reporting that one in four Las Vegas homeowners owed more on their houses than they were worth. And for a long time, commercial and residential developers were content to step away and lick their wounds.

Last year, Las Vegas had the highest year-over-year multifamily rent growth in the nation, at 7.8 percent, as per a report from CBRE. Retail vacancy saw a 150-basis-point decline in the last quarter of 2018 to 7.4 percent and rents increased $1.60 per square foot. Plus office vacancy was the lowest it had been since 2007, at 14.3 percent (also per CBRE). And developers have taken notice.

Some other examples of the new influx of development: Madison Square Garden is developing the MSG Sphere, an arena-slash-event space employing cutting-edge technology in every aspect of its sound and video. Resorts World Las Vegas and The Drew Las Vegas are both currently in the works, set to become the first new megaresorts to open in Las Vegas since The Cosmopolitan in 2010.

Caesars Entertainment is currently building Caesars Forum, a “$375 million, 550,000 square-foot conference center in Las Vegas that will feature…Forum Plaza, the first 100,000-square-foot outdoor meeting and event space in Las Vegas,” according to a company press release.

“We’re about Las Vegas’s transformation, and embracing the experience economy past just gaming,” said Fisher, regarding Area 15, who calls this period of the city’s evolution “the next re-invention of Las Vegas.”

“Las Vegas has partially re-invented itself as an experience destination,” he said.

Fisher Brothers bought the 16-acre parcel of land Area 15 is being built on in 2006, then were stymied by the financial crisis. In recent years, though, it became clear that the time was right to build something on the land.

Area 15 is being positioned as an “immersive bazaar” that will feature art installations and all manner of interactive experience. Their anchor tenant, Meow Wolf, is a Sante Fe company that creates exhibits like “House of Eternal Return,” a “multidimensional mystery house with secret passages, portals to magical worlds, and an expansive narrative amidst surreal, maximalist, and mesmerizing art exhibits,” according to the company’s website. Area 15 will host interactive exhibits and events such as virtual reality, escape rooms, and axe-throwing, as well as, Fisher said, “a 2,000-square-foot bamboo volcano being built by a woman in Bali.”

The MSG Sphere, projected to open in 2021 with a “scalable capacity of approximately 18,000 seats,” is another experiential destination that promises to break new ground, including a fully programmable LED exterior, the largest LED screen in the world wrapping the Sphere’s interior, and acoustics designed to be personalized for every attendee.

According to Jayne McGivern, an executive vice president of development and construction for Madison Square Garden Company, the Sphere will host “all types of entertainment events, including concerts, residences, family shows, award shows, corporate events and product launches, along with next-generation events for audiences who want to be more connected and even participate in the event experience, such as mass gaming.”

“There are a number of cultural trends taking place today—[such as] the millennial generation seeking engagement or people with similar interests looking for a communal experience,” McGivern told Commercial Observer in an email. “We are building a place where these groups can gather and connect, and we’re going to use technology to help drive that connection and create immersive experiences that truly bring artists and audiences together.”

Also on the way is the Expo Center at World Market Center Las Vegas, a 315,000-square-foot, $76 million convention center. And while not new construction, the Las Vegas Convention Center is gearing up for a $1.4 billion redesign that will include an $860 million expansion featuring a new 600,000-square-foot exhibition hall.

Of course, more important to Las Vegas than retail or convention centers is hospitality, which has caught fire as well.

Resorts World Las Vegas, on the site of the old Stardust Resort and Casino, has had some difficulties, including a just-resolved dispute with Wynn over the design of the resort, but will house 3,400 hotel rooms upon opening.

The Drew Las Vegas, being developed by Witkoff and Marriott International, will feature almost 4,000 rooms and suites and over 500,000 square feet of convention and meeting space.

“The number one statistic that convinced us to [develop this project] was that there had been no new supply, other than the Cosmopolitan, since 2009,” Witkoff CEO Steven Witkoff told CO. “It’s the only major hotel submarket in the country that has seen no new supply in its marketplace. The entire Las Vegas market is operating at 92 percent occupancy, 365 days a year. When you get to buy in a market where there’s been no new supply for 10, 11 years, and a major market at that, that’s a big green light.”

“Go back to 2008 or 2009, when 10,000 rooms came into the market with CityCenter and others. You just haven’t seen an influx of new supply into the Strip [since],” said Payne. “I don’t know if [it’s all due to that], but that’s the reality of the value of the businesses there right now. They do really well.”

The number of visitors to the city bears out the continued need for new hotel rooms in Las Vegas.

“The Las Vegas Convention and Visitors Authority released a study at the end of 2018,” Michael Massari, the chief sales officer at Caesars Entertainment, said in an email to CO, “chronicling how Vegas broke convention records in 2017 by hosting more than 6.6 million convention attendees throughout the year, and saw continued growth in the meetings market.”

Marcus Threats, a member of CCIM, and a Las Vegas-based broker, believes the upturn began in March of last year, with the announcement that the Oakland Raiders were moving to Las Vegas. The team broke ground on its new, 65,000-seat domed Las Vegas stadium that November, and the Raiders are expected to start playing there in 2020.

“That project is creating about 8,000 construction jobs from start to finish,” said Threats. “Then hotels [see this major new project] and say, if we’re gonna update, now is the time.”

The Raiders’ move to Las Vegas is being seen as a boon not just for locals, but as yet another attraction, this one deeply personal to many, to draw people to the city.

“Think about what weekends will be like during football season,” said Witkoff. “Not only will you have local interest, but when the Jets play the Raiders, you’ll have New York people wanting to come. When the Rams play, L.A. people will plow into the place. Every one of these things becomes additional traction points to draw more people into the market.”

As the town is booming with major projects like the new stadium, the effects are being felt down the line. Along with larger resorts, Threats said the market for new construction for limited-service hotels is red hot.

“At this time, there’s one major new development being built, the Resorts World by the Genting Group out of Malaysia. By the same token, there are 10 limited-service hotels, with 50 to 250 rooms, [on the way]. I’ve got a deal right now for a Travelodge two-story exterior corridor. Prices are increasing, especially if it’s anywhere near the strip. I’m born and raised here, and I’ve never seen 10 limited-service hotels being built at one time.”

The growth in Las Vegas real estate finds not just a recovered town, but a transitional one. The embrace of the experience economy by many of the city’s major players indicates a shift in how people view Las Vegas, and in many cases why they travel there.

“We’re going to build a fully integrated resort, not a gaming palace,” said Witkoff, of The Drew. “That’s where the trendlines for Las Vegas are going. Twenty, 25 years ago, every one of these hotels made their money 70 percent from gaming, 30 percent from everything else. Today, that paradigm has flipped 180 degrees. Now they’re making 70 to 75 percent of their revenue from rooms, food and beverage, nightclubs. The whole experience. They’re making maybe 20, 25 percent of their income from gaming.”

With all this change and growth on the hotel, resort and retail side, the residential market is showing signs of life as well, at least in part due to the influx of construction workers building all the other projects.

“Las Vegas has 4.6 percent unemployment, and for construction workers it’s even lower,” said Threats. “All those people are relocating here, and that’s what’s driving the housing market.”

Last June, the Las Vegas Review-Journal reported that the city’s plummeting vacancy rate and rising rent rate were leading to massive interest from corporate buyers. In 2017, 105 apartment complexes were sold for a total of $2.7 billion. By contrast, the paper reported, only 31 were sold in 2011, when the market was near its lowest, for a total of $346 million.

Also last June, the Las Vegas property management firm Shelter Realty reported on its website that the Blackstone Group had spent $616 million on Vegas-area rental properties since the spring of 2017.

“The multifamily market [there] is actually doing quite well,” said Jorge Pérez, Chairman and CEO of Related Group. “Ninety-five percent occupancy. Rents have grown nicely. Huge employment growth. We are looking at some suburban-urban locations in really, really nice areas there, with golf courses and things like that. And we’re also looking with the city to become developers in downtown. We like the future possibilities there. We love to have new neighborhoods we can have an impact in, and we are right now talking to the City of Las Vegas and trying to do something there.”

Steve Patterson, the president and CEO of Related Development, the rental arm of Related Group, told CO in an email that the company is “pursuing assets downtown, west and southwest Las Vegas,” though he said it was too early to disclose further details. He noted that the best indication to Related that the time was right for investment in rental properties was “strong rent growth.”

“Las Vegas had a long way to go here due to the deep fall during the last recession, but residential rents have recovered nicely,” he said. “Strong trailing job growth and good prospects for continued job growth and immigration are also factors that led us to invest in this market.”

Given all this, the general attitude of the real estate community toward Las Vegas has gone from dismal to delighted.

The enthusiasm of the companies opening new properties and developing new projects is testament to how Las Vegas, not long ago a city mired in a financial meltdown, has turned a corner, positioning itself as a city for a new generation.

“There is so much investment and growth in Las Vegas right now including new hotels, attractions, convention spaces, professional sports teams, arenas and stadiums,” said McGivern. “Like many others, MSG believes in Las Vegas as a growing and thriving city, and worthy of significant investment.”

With reporting by Max Gross and Lauren Elkies Schram.