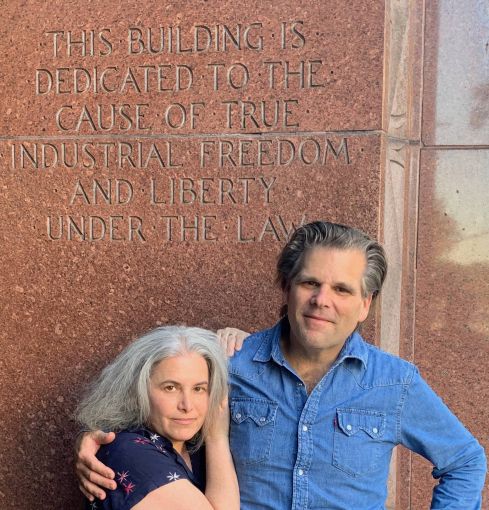 Kim Cooper and Richard Schave at the former headquarters of the LA Times at Times Mirror Square. Photo: Ruta Vaisnys

The cofounders of Esotouric, a bus tour company dedicated to the “secret heart of Los Angeles,” plan on launching a “Jose Huizar’s DTLA: A New Crime Bus Tour,” chronicling the District 14 Councilman’s hand in real estate projects in Downtown L.A. under his purview, following the conclusion of a federal investigation into potential wrongdoing by Huizar.

Councilman Huizar is currently at the center of an FBI investigation into potential kickbacks, extortion, money laundering and bribery between private sector and officials charged with green-lighting development projects throughout the city.

Esotouric’s four-hour bus tour will include stops highlighting locations involved in past and the current scandal, Schave told Commercial Observer.

Top spots include the 6th Street Viaduct, the Parker Center (the former Los Angeles Police Department headquarters, which was razed last month) and Times Mirror Square, the former headquarters of the Los Angeles Times owned by the Onni Group. The Los Angeles Times reported earlier this month that the Canadian developer had donated $50,000 to a campaign committee with ties to Huizar before a crucial vote which would designate a portion of the property designed by William Pereira as a historic landmark, thus complicating Onni’s plan for two residential towers on the site. Schave headed the effort to have the entire property designated as historic monuments, which was defeated in November by City Council vote, as CO reported.

Also on the agenda is a stop at Oceanwide Plaza, which was being funded by Chinese developers subpoenaed in the FBI investigation, before suddenly stopping last month due to financing shortfalls, as reported by the Los Angeles Times.

Schave says he plans on putting the Huizar situation in context with other scandals that have marred the City of Angels since the turn of the century, when families like those headed by Harry Chandler, publisher of the Los Angeles Times, ruled.

“You study the history of corruption in Los Angeles from the turn of the 20th Century to the current era and you study how the city was influenced by families like the Chandlers, and what was good for Harry Chandler was good for Los Angeles. You study what impacts policy,” Schave said.

Schave and Cooper, social historians that began their bus tour company with true crime offerings, have not shied away from real estate on their tours, examining topics like the modernist architecture of overlooked South Los Angeles, the real estate boosterism of the 1880s and urban redevelopment.

Schave pointed to what is happening in Los Angeles, largely downtown in the district that Huizar oversees over just the past five years, as particularly suspect.

“We’re seeing all these impacts of these, for lack of a better word, international investment in the Los Angeles real estate market which has completely transformed development in all of Los Angeles. And you have to ask, what is happening here and you begin to realize City Council has to be breaking laws in order to vote in total lock-step,” he said, citing the council’s record of unanimously approving development projects.

And though there will be no official lunch spot on the tour, Schave will provide a snack break with pastries from Texas Donuts and coffee he brews himself.