What Does the Federal Government Shutdown Mean for Real Estate? 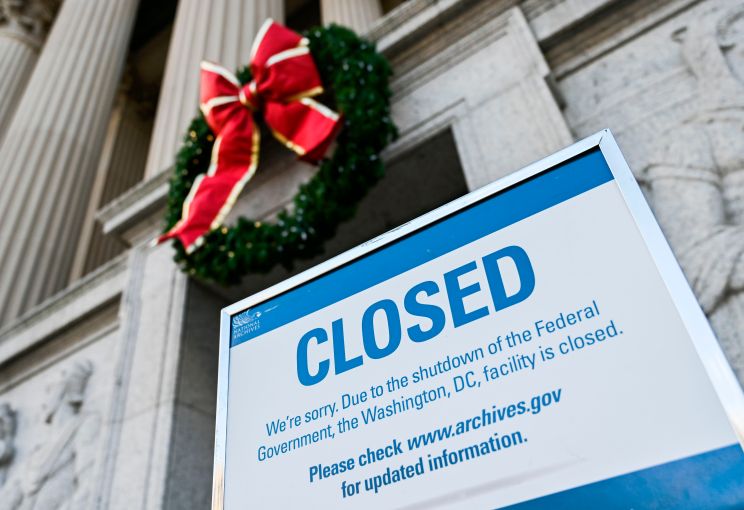 The National Archives in Washington, D.C., was closed because of a government shutdown. ANDREW CABALLERO-REYNOLDS/AFP/Getty Images

The federal government’s shutdown stretched into its 12th day today as President Donald Trump keeps pushing for $5 billion to fund his border wall while Democrats still refuse to allocate the cash.

Despite a bipartisan meeting set with congressional leaders and a Republican Senate-floated compromise to give $2.5 billion to border security, Trump rejected the deal and signaled no immediate end to the shutdown during a cabinet meeting this morning.

“This is national security we’re talking about,” Trump said during the meeting, according to The New York Times.

“Could be a long time, or it could be quickly,” Trump added about the shutdown. “It’s too important a subject to walk away from.”

While 12 days is a relatively short time for the real estate world to feel the effects of the shutdown—especially since it occurred during the holidays—if it stretches longer than a month the market could feel it.

Among the biggest concerns, the shutdown could delay new mortgages for homes and landlords of public housing, cause furloughed federal workers to miss mortgage payments and make large companies uneasy about executing large investments, experts said.

While government-sponsored enterprises Fannie Mae and Freddie Mac are continuing with business as usual during the shutdown—since they don’t depend on government money to run—potential homebuyers could run into delays getting mortgages to close on purchases especially if they rely on Federal Housing Administration (FHA) or United States Department of Agriculture (USDA) loans, according to Moody’s Analytics’ chief economist Mark Zandi.

“The housing market is already struggling, as home sales have flatlined over the past year,” Zandi said in an email. “The shutdown will cause sales to fall and house prices to weaken if it goes on for more than a couple more weeks.”

And beyond delays and missed payments, there could be longer-term implications.

“All the fluctuations that’s going on puts a pause on companies deciding what long-term investments to make,” Lawrence Yun, a chief economist at the National Association of Realtors (NAR), said. “Do they actively purchase a commercial property knowing there could be further disruption in the future? They could be more hesitant or go on a more [smaller] scale.”

During the shutdown, the USDA is not issuing new rural loans or closing on direct loans, according to NAR. The United States Department of Housing and Urban Development (HUD) is still closing on single-family loans during the shutdown, but the agency could be stretched thin as many staffers are furloughed, Yun said.

“All those things should occur but with a shortage of staffing you are spreading out people and you can make it much more difficult,” he said.

Even those not relying on federal loans for home purchases can get their closings delayed by the shutdown if they need a new social security number from the Social Security Administration or tax returns from the Internal Revenue Services since both agencies are operating with short staff, Zandi said.

For larger property owners, HUD is not endorsing new loans for its multifamily program and loans to owners of public housing projects could be impacted as resources as stretched thin, said Heidi Learner, the chief economist at Savills Studley.

“Anyone who depends on FHA loans for either new mortgages of refinances are going to be put on hold,” she said. “Some loans to public housing and housing agencies across the country could potentially be delayed.”

But even if the shutdown drags on for a long time, Learner doesn’t expect businesses reliant on SBA loans to stop paying rent.

“They’d probably let employees go before they defaulted on any kind of rent,” she said.

“It could begin to shave off GDP [Gross Domestic Product] growth in a measurable way,” said Yun. “The touted GDP goal of 3 percent, one may not be able to get that.”

Experts agreed that the shutdown needs to be longer than 12 days before doomsday scenarios start to unfold and even with Washington’s divided government some don’t expect it to get that far.

“[The shutdown] kind of got lost in the holiday news, but I think now that people are back to work it’s going to pick up steam,” Learner said. “I would hope that if it wasn’t resolved by the end of this week there would be broad contours to the end of the shutdown.”