This Is Muss: Jason Muss Weighs in on Queens, Family and More 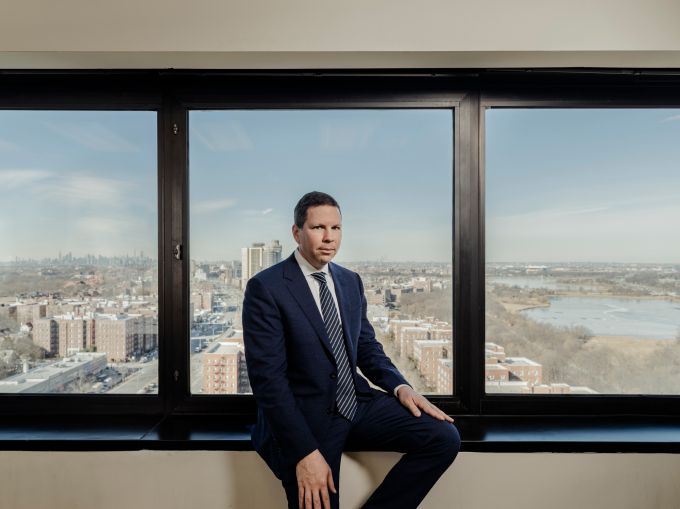 It all comes back to Queens for the Muss family.

After emigrating from Lithuania to New York City in 1906, Isaac Muss started building homes around Brooklyn and Queens for his family and eventually began Muss Development. One of his 11 children, Hyman Muss, later took it over and expanded the firm’s lines of business into construction with the building of Jackson Heights Shopping Center in Queens.

The company grew to build or own about 40 properties around the city in every borough but the Bronx, and some in Maryland and California, with everything from offices to hotels. But Jackson Heights Shopping Center, built in the 1950s at 75-07 31st Avenue, remains in its 4-million-square-foot portfolio.

“We keep it maintained and it’s full,” said Jason Muss, 47, a grandson of Hyman Muss and the president of Muss Development. “We take it seriously when we say long term.”

Even though the family no longer lives in the world’s borough, Queens remains a vital part of its business. In 2015, it updated the Jackson Heights Shopping Center and recently completed a multi-million-dollar renovation of its 16-story office building Forest Hills Tower, which it erected in 1981 and where it keeps it offices.

The project encompassed replacement of all of the building’s mechanicals, updating the lobby and adding a new skylight and concierge desk. In November 2018, the building reached full occupancy when the powerful union, the United Federation of Teachers, inked a 44,000-square-foot deal for its Queens offices. The union also leases space in a Muss property in Staten Island.

Muss was born in Jamaica Hospital, grew up on Long Island, N.Y. and recently decamped to Riverdale in the Bronx. The father of three—16, 13 and 12—graduated from Yeshiva University, got a law degree from New York University then immediately joined the family business working on a little bit of every aspect of the company.

He was named the president of Muss Development this month, assuming a more leadership role from his father Joshua Muss, who is now the chairman.

People who know the younger Muss said it was a good choice, calling him a smart businessman who understands real estate very well.

“He thinks things through in a very pragmatic way and doesn’t make rash decisions,” said Robert Knakal, the chairman of New York investment sales for JLL, who’s worked on deals with Muss and plays golf with him socially. “He’s really a professional’s professional.”

Commercial Observer sat down with Muss in his offices in the company-developed Forest Hills Tower to talk about his goals as the head of the company, investing in the outer boroughs and his plans for the future.

Commercial Observer: What’s behind the promotion to president?

Jason Muss: I’ve been working with Josh for 22 years now, since I graduated from law school, and you know it’s been a great relationship. Recently, I’ve been asked [by my father, Josh] to step into the role of president. Josh is going to be the chairman. Not much is going to change by doing that, but I think it’s just a reflection of where our roles are going. Josh has been a fantastic mentor to me and steward of the family business. He really expanded and took us to where we are now. I’m just thrilled to be in a position to continue what he’s done and advance the business anyway I can—whether that’s development, which I’ve been a part of in a big way, or acquisitions. I think that those are the two main driving focuses that we’re going to have.

My goal is to keep the family company always moving forward and trying to continue to do things in the way we’ve done them, with integrity and transparency and all the things that I think we’re known for. Not to screw it up is what it comes down to.

You developed projects in Sheepshead Bay and Brighton Beach, Brooklyn, as well as Forest Hills, Queens, which for a lot of people are the far reaches of the outer boroughs. What attracted you and your family to those neighborhoods?

For us, the far reaches of the outer boroughs is in the middle of the boroughs that have more people than any other city in the country outside of New York. If you look at Brooklyn and Queens on their own they’re tremendous cities. We have property in Manhattan—we love Manhattan—but we also love Brooklyn, Queens and Staten Island. We love all the boroughs we’re in and we think that they each have their own merits and their own reasons for being there. Sheepshead Bay, for example, why would we go there? [Muss developed the neighborhood’s tallest building, the 30-story 1 Brooklyn Bay, in partnership with AvalonBay. Sales for the condominiums started in 2017.]

If you look at the space between Bay Ridge [Brooklyn] and Midwood [Queens], there are hundreds and hundreds of thousands of people and there have been almost no condos of quality to serve the needs of the people who want to stay there, live there and live in luxury. We thought there was a need and we were able to serve it. We found a two-and-a-half-acre piece of property. We said there aren’t too many of these around, let’s do this. It makes sense.

Why aren’t you in the Bronx?

We’re not against the Bronx. We just haven’t had the opportunity to develop there or buy anything there, but we’re open to it.

Do you feel like a lot of other developers who just focus on Manhattan or the hot neighborhoods in Brooklyn miss out on opportunities in places like Sheepshead Bay or Brighton Beach?

Sure…New York is full of great neighborhoods and we’re lucky to have a choice of a lot of possibilities when we look at where we’re gonna do business. We’ve been busy buying not just in Brooklyn and Queens, we’ve done Manhattan—we have properties in Midtown and the Upper East Side and we’re looking there all the time.

Historically—many, many, many years ago—we maybe overlooked [Manhattan]. We weren’t really thinking about it, but I think now that’s sort of changed and we’re very interested in it as part of our strategy of having diverse holdings in New York City.

When did you get into buying Manhattan properties?

I lived in Manhattan for a long time, so just living there makes you keenly aware of opportunities. The first major building we bought there was 1556 Third Avenue, which was in 2007. So it’s not that long ago. As time went on we were able to buy other things like 865 Lexington Avenue, which was a retail condo, and we bought other properties on the Upper East Side that were interesting to us.

We’re certainly interested in Manhattan and really it just depends on what you see and what you find. You might find something that’s just a much better deal in Brooklyn than Manhattan and vice versa. These days you just never know. Fortunately, with lenders, they understand almost every neighborhood in New York. So, if you want to get a loan, if you want to finance something, there’s a lot of really understanding lenders and sources of equity. [Investors] get other neighborhoods and we have a lot of flexibility with the business plan.

Is that a recent thing?

It’s relatively recent in the history of New York City. In the past, we had a few lenders that understood what we were doing, and we went back to them a lot. Now I think we’re seeing that when we go to do financings—and that’s been a big part of our strategy in the last two or three years—insurance companies get it more than they used to. It used to be the insurance companies would limit themselves to Midtown. All these insurance companies are generally not New York-based, they’re either Midwest-based or their foreign or far away on the West Coast, so when they are explaining their loans to their boards it was always like much easier if you’re lending on 1150 Avenue [of the Americas] or One Wall Street than it was in Downtown Brooklyn or Flushing [Queens]. Now the level of sophistication of some of these lenders has gotten to a point where it’s an easier conversation and that’s allowed us to pivot and put some really great long-term financing on some assets. Our philosophy has been, why not take advantage of historically low rates to the extent we can and…get it to a point where there’s an amortization in these loans.

We’re not greedy. We’re not over leveraging anything, so we can take a lot more money now than we otherwise might get. We’re maintaining cash flow, but at the same time we’re taking advantage and taking care of the asset for the long run.

Does the long history of the company [which turns 113 years old this year] put pressure on you to make sure it’s going to stick around for another 100-plus years?

There’s no pressure. If you do the right thing by the assets, the only pressure that we would have would be external factors that we can’t really control. Like an earthquake or the economy goes to hell because of some great recession or depression; that’s something that’s always possible. But again [having] low leverage, running your business properly, running your assets properly, taking care of tenants and keeping your eye on that is very important. We don’t take tenants for granted. We don’t just think there will be another tenant around the corner.

What’s coming down the pipeline that you can talk about?

We own land in St. George, Staten Island, and we’re eager to pursue that as a development. We have about 350,000 square feet buildable there on land that we’ve owned for a very long time. In 2019, we’ll be exploring that possibility.

Do you think the New York Wheel project being canceled will change your plans at all? [The New York Wheel, backed by several investors including Lloyd Goldman and Jeffrey Feil, was to be a 630-foot-tall observation wheel on St. George’s waterfront. Developers scrapped the project in October 2018.]

Not at all. We’re talking about a residential project which is serving Staten Island, which I think still needs housing. The wheel could have potentially affected the shopping centers that are around there, but again I don’t think the wheel itself was essential to what’s going on in St. George. I think it would’ve been nice to have, but the land is still there. Something’s going to happen with the land. Something productive I think will happen.