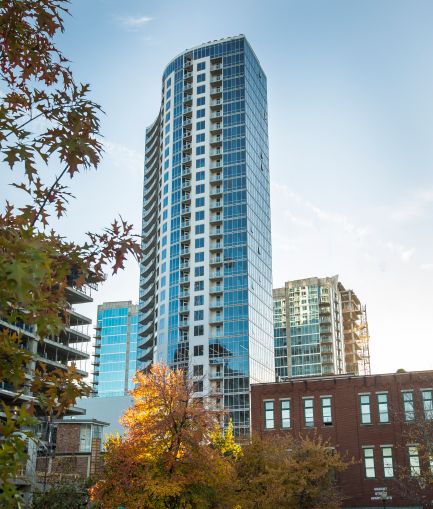 Square Mile Capital Management has provided $90 million to a joint venture trio to refinance The SoBro, a 32-story apartment tower in downtown Nashville, Tenn., according to an alert from Square Mile.

The loan—which refinances existing debt on the property and also funds future leasing costs—was provided to a joint venture among Chicago-based firms Magellan Development Group and Wanxiang America Real Estate Group and renowned Nashville-based developer Giarratana Development. The trio began construction on the $90.8 million tower in 2014 and opened the 313-unit, now fully-leased property in the fall of 2016.

“Nashville has been undergoing a significant transformation, with a massive influx of new jobs and a growing population,” Square Mile Principal Eric Cohen said in prepared remarks. “The SoBro, a very well-located and amenitized residential property, represented an ideal opportunity to expand our portfolio in an attractive target market.”

Tony Giarratana of Giarratana Development nabbed a nearly $91 million financing package for the development of the tower in July 2014, according to a report from The Tennessean. The deal included a $58 million senior construction loan from Chicago-based BMO Harris Bank and a $17.8 million mezzanine loan from New York-based NorthStar Realty Finance. Giarratana’s SoBro Development Co., Wanxiang and Magellan are equity partners in the project, according to The Tennessean’s report.

The 572,578-square-foot tower is located at 205 Demonbreun Street in the SoBro—South of Broadway—neighborhood of Nashville, just a couple blocks from the Cumberland River, which runs through the city’s downtown. It comprises a mix of studio to three-bedrooms units, with monthly rents starting at $1,529, according to to the property’s website.

In August 2018, the Nashville Business Journal reported that the ownership group had tapped brokerage HFF to solicit offers for sale of the property ahead of this refinance. HFF floated an offering price equivalent to around $415,000 per apartment, according to the report.

Designed by Loewenberg Architects, the property sports over 21,000 square feet of amenities. It has two on-site restaurants: City Tap and Café Intermezzo. Both are located on the first floor, with City Tap offering a rooftop alternative, called CT10, which is located on the building’s 10th floor, overlooking the city’s skyline. The property also has a 24-hour concierge, a 502-space parking garage, a rooftop lounge, a music room, a gaming lounge, a fitness center, conference rooms, a sauna, and an outdoor pool and sundeck.

Magellan, which manages the property, has, for the first time in its history, implemented a musician in residence as an amenity at the location, paying homage to Nashville’s roots and promoting the city’s rich music culture. The amenity sprouts from what’s called “The SoBro Star” music competition, which allows building residents to pick one local musician to compete to serve as both a live-in performer and as in-house entertainment for any events at the building.