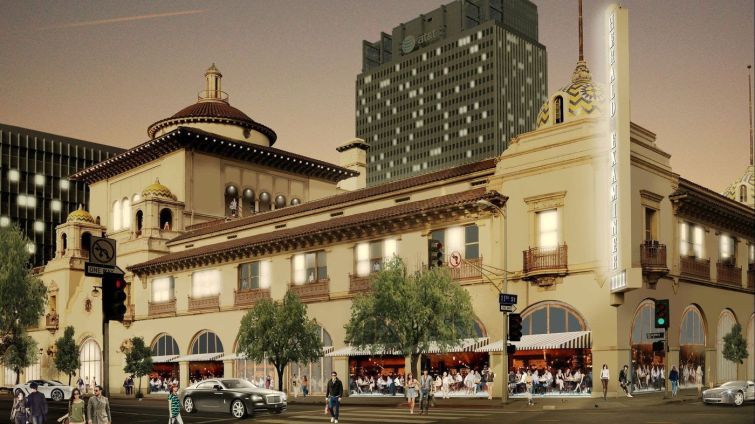 A rendering of the redeveloped Herald Examiner Building. Photo: The Georgetown Company

The bridge loan will be used to fund the renovation and restoration of the property into a mixed-use development complete with creative office, retail and restaurant spaces.

The financing was arranged by global brokerage HFF on behalf of New York-based The Georgetown Company. Todd Sugimoto, Jeff Sause and Spencer Richley comprised the HFF team that brokered the debt.

The 100,000-square-foot building, which is located at 1111 South Broadway in downtown LA’s bustling South Park neighborhood, will house an Arizona State University satellite campus as well as a Walter and Margarita Manzke-led restaurant, République. It’s 90 percent leased, a fundamental reason for the bevy of lenders who were vying for the financing, according to Georgetown vice president Michael Fischer.

The South Park area of Downtown LA also features the Microsoft Theater, STAPLES Center, the Los Angeles Convention Center and an Ace Hotel. There’s also an Apple Store and two boutique hotels—Hoxton Hotel and Proper Hotel—slated to join the roster of offerings in the area.

“We’re very bullish on the market downtown, and we’re happy with the way things are developing in our part of South Park, with the Ace Hotel and with Apple coming to the neighborhood,” Fischer told CO. “We really have a great concentration of hotels and restaurants and new residential product. As we see these opening over the next two or three years, it’s going to be transformational.”

Built in 1914, the property, designed by Julia Morgan, who was California’s first registered woman architect, was originally intended to be the home of the Los Angeles Examiner newspaper.

“With the history of the building, and Julia Morgan’s ties to the Hearst family, and the Herald Examiner, there’s a real history here that’s unique, and the architecture is unique as there’s no building like it; it’s very identifiable,” Fischer said. “The architecture is very significant to LA.”

Commissioned for development by the late William Randolph Hearst, the building was designed by Morgan in a “Mission Revival” style—a reinterpretation of colonial-style architecture—with a lobby that featured grand, arched spaces lined with carved marble friezes, wood-trussed high ceilings and a patterned tile floor. Georgetown’s redevelopment of the property is aimed at restoring the property’s original splendor and flair.

Fischer said in a prepared statement: “We have always been very confident in the growth of the South Broadway Corridor and the strength of the downtown market overall. [The renovation of the Herald Examiner Building] is a key step towards bringing back this iconic property in all its former glory.”

Georgetown recently completed a $280 million multi-phase redevelopment of Sony Pictures Entertainment’s studio site at 10202 Washington Boulevard in Culver City, which saw the creation of new office and production facilities. The firm, in conjunction with Paramount Pictures, was also involved in developing a theater and office buildings at the site of Paramount Pictures Studios at 5515 Melrose Avenue in LA.