Cuomo Puts His Foot on the Gas for Congestion Pricing 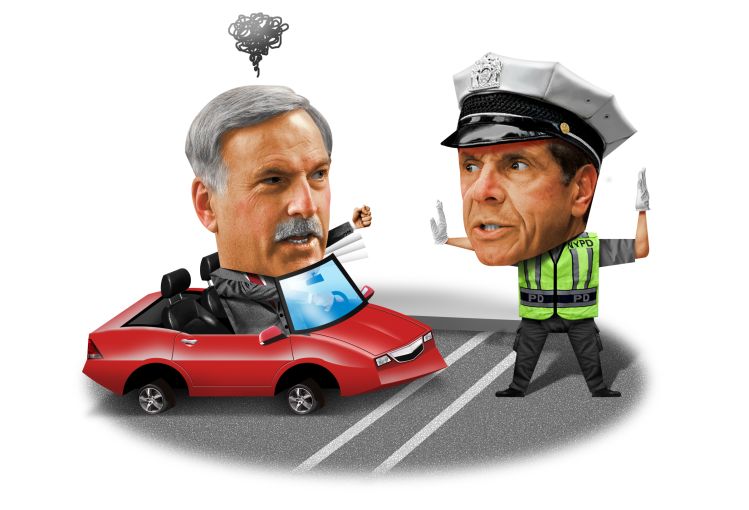 Six weeks after winning a third term, Gov. Andrew Cuomo outlined his priorities for the first 100 days of 2019 in a speech that political observers and the press picked apart for signs of his possible presidential ambitions.

One of the goals tucked between his stances to legalize recreational marijuana, cut taxes and enact early voting was a measure to collect revenue for the region’s mass transit system which is crumbling after decades of what he called “benign neglect,” while also curbing traffic on city streets and bridges.

“This year we have to take the bull by the horns with the [Metropolitan Transportation Authority]. We have to pass a dedicated funding stream so the MTA has the funding it needs. Congestion pricing [is] the only alternative,” Cuomo told a crowd of civic leaders and state employees at the New York City Bar Association in Midtown on Dec. 17. “No governor, no mayor, no county executive, no state legislator will fulfill their public obligation this year without addressing this critical need, period.”

The idea of congestion pricing—fees on vehicles crossing into and out of Manhattan’s central business districts in order to limit traffic and use the revenue created to fix the city’s mass transit problems—has fueled the budgetary plans of politicians and policy wonks since the 1970s only to run out of gas in Albany.

In 2008, then-Mayor Michael Bloomberg pushed a plan charging motorists $8 on crossings into Manhattan below 60th Street during rush hour, only to have Assembly Speaker Sheldon Silver refuse to bring the bill to the floor citing weak support among fellow Democrats. By 2015, transportation advocates promoted a revised plan adding cashless tolls on free East River bridges in exchange for lowering tolls on outer-borough crossings including the Whitestone and Verrazano bridges.

Almost exactly a decade after Bloomberg’s effort, Cuomo tried to jam into the state budget a task force-recommended $11.52 surcharge on cars and a $25.32 toll on trucks driving across the East River. But the Republican-controlled state Senate and some influential Democratic Assembly members wouldn’t go along for the ride. Lawmakers passed a $2.50 congestion pricing fee on yellow cabs and a $2.75 surcharge on for-hire vehicles such as Uber and Lyft for picking up or dropping off passengers in Manhattan, but a lawsuit is currently holding up its launch.

Despite stalling out during Albany’s legislative winters, there’s optimism among advocates that this is an idea “whose time has come,” as Cuomo has put it.

And if congestion pricing gets signed into law this spring, it will be because of two reasons—the broad realization that the city’s transit system is in crisis and the change in leadership in state government.

“It needs to be Albany’s number-one funding priority this year.” The first tipping point occurred during the summer of 2017 when city real estate developers realized the MTA needed an annual source of funding beyond passenger fares to bring it up to speed or it would break down.

The region’s 112-year old transit system’s debts were creeping up to $40 billion, with a $32.5 billion capital plan that would lead the authority to borrow $5 billion while its expenses were outpacing its revenue.

“There was a period of time over multiple decades where there was a lack of investment, and at the same time we had a growth of population and an increase in demand that put more strain on the system,” said RXR Realty CEO Scott Rechler who serves as the chairman of the Regional Planning Association. “When you put off infrastructure investment, the cost goes up geometrically because of the wear and tear.”

But it was a preponderance of signal malfunctions, broken rails, track fires, and overcrowding slowdowns in 2017 that marred the system to the point that performance of every subway line worsened that year. In one particularly hellish month, riders were stranded for 45 minutes on an overheated F train, hours-long delays at Herald Square led one rider to walk through the tunnels like he was a member of The Warriors, and two cars on a southbound A train derailed near 125th Street injuring 34 people.

That caused Cuomo to declare a state of emergency for city subways on June 29, 2017—promising $1 billion for repairs and ordering then-MTA Chairman Joe Lhota to draft a rehab plan. Then he warned two weeks later commuters would face a “Summer of Hell” thanks to extensive track work at Penn Station.

The near-daily accumulation of delays rankled developers and their employees who depend on a functioning mass transit system not only to maintain the value of their properties, but to get themselves to work on time.

“Our members, their employees and their tenants are totally dependent on the transit system to move from point A to point B,” Real Estate Board of New York President John Banks told CO. “No one would argue it is in a state of good repair now.”

Weaving 840 miles above and below New York City, the subway lines have deteriorated over decades and threatens to constrict the region’s economic vitality like a python. After a year of hell, ridership in 2017 fell by 30 million people to 1.72 billion from the previous year—the second straight year of declines. Meanwhile traffic on city streets has gotten worse with average speeds in Manhattan slowed from 9.1 mph in 2010 to 7.1 mph in 2017, while speeds in midtown plummeted from 6.4 mph to 5 mph in the same period as people increasingly ditch the train for for-hire vehicles and cabs.

The subway’s decline in service represented an “existential threat” to the city’s health, Two Trees Management CEO Jed Walentas said. “It could severely disrupt the demand to live and work here, much like the high crime did when I was growing up in the 1980s or all the uncertainty we experienced after 9/11,” the Brooklyn developer added. Updating century-old technology will not be simple or inexpensive. The transit authority needs as much as $60 billion, or roughly one Mark Zuckerberg, to repair its rails and tunnels and continue routine maintenance over the next five years, according to some estimates. That includes $19 billion for the MTA’s “Fast Forward” plan to modernize signals, order new trains and buses, and improve station accessibility within the decade. That price tag will continue to skyrocket the longer state and city leaders wait to get something done.

Fares, taxes, tolls and subsidies all feed into the MTA’s budget, but civic leaders and transportation advocates argue the authority needs a new stream of revenue in order to bring the system up to speed. Congestion pricing won’t do it alone, but it could bring in more than $1 billion per year depending on how it is structured.

“Asking the ridership to fund the entirety of that cost is not practical,” Banks said. “It’s really important whatever comes out of Albany addresses the different funding needs of the MTA while implementing strong managerial changes to make the public comfortable with money generated through the fare box, congestion pricing, or the surcharge on taxi rides is being managed effectively.”

The state created a task force, Fix NYC, that included REBNY Chairman Bill Rudin, Rechler, business association heads and union leaders, which came up with a congestion pricing plan in January 2018. When legislative leaders could not reach an agreement last March, a diverse coalition of groups including REBNY, transportation advocates, housing and social justice organizations, the AFL-CIO and Uber announced in October they would push Albany to try again in 2019.

“We must win over enough legislators in both houses but I feel confident,” said Alex Matthiessen, a coalition spokesman and environmental consultant. “We have as good a chance as anyone has ever had to pass congestion pricing in the State of New York.” Another reason for optimism this year is that Democrats flipped the state senate this past November, putting leaders who support congestion pricing atop all three houses of government.

Democrats now hold 39 of the chamber’s 63 seats—a sizable majority enabling them along with the assembly to pass the flood of progressive initiatives on Cuomo’s wish list. Half a dozen new senators announced in December that they want a congestion pricing plan and some lawmakers who have been cool to the idea, including Queens Assemblywoman Aravella Simotas, have voiced their support. Even Mayor Bill de Blasio, who had advocated for a millionaire’s tax instead of driver tolls and has in the past called it a “regressive tax” on the working class, said last year he would consider a proposal that directs revenue to city mass transit projects and gives the city the ability to sign off on them.

The staunchest opposition to congestion pricing remains suburban and outer-borough lawmakers whose constituents are dependent on their cars because subways and buses don’t reach their neighborhoods. Queens Assemblyman David Weprin argued that adding tolls on East River bridges, which have “stayed free for over 100 years” would be a “burden on middle-class people and businesses.” And Queens Councilman Daneek Miller warned his constituents could face an additional $3,000 per year in expenses.

“The problem has been a lot of Queens is against it and a lot of farther-out Brooklyn has not been in favor,” said Brooklyn Assemblywoman Jo Anne Simon, a sponsor of past versions. “I think it will take some time for people to come around. We are not yet there. It’s a very expensive bill.” Navigating an issue that cuts across party lines will be a challenge for transit advocates and their allies.

“Congestion pricing does not fall into left or right, Democrat or Republican; it is very often geography,” said Manhattan State Sen. Liz Krueger, who supports the idea. “If you are from the outer New York area, you may default to arguing you are not getting adequate service, and you do not see why you have to pay anymore.”

Its success depends on which components of the governor’s task force he uses in his budget proposal unveiled later this month and how well advocates can sell the plan to the public. Some of those ideas mentioned in the Fix NYC report include installing a toll on East River bridges ($11.52 for cars and $25.34 for trucks) but exempting drivers who exit northbound into the FDR Drive, adding a credit against a toll charge for motorists using the Lincoln, Holland, Carey, and Queens Midtown Tunnel, or adding tolls that range from $5.50 overnight to $11.50 during morning rush hour.

But details remain scarce and Cuomo may not incorporate any recommendations (he recently reversed three years of planning to repair the L train tunnel without closing it down completely).

Rechler, who served on the task force, wants lawmakers to include congestion pricing as part of a comprehensive solution to fund the MTA or it risks damaging the “longterm economic vitality of the region.”

“People make decisions where they will live and work based on access to public transportation. The farther away you live, the less of a premium you can put on your rent or the value of your real estate,” Rechler said. “The prosperity people have enjoyed is fragile and can quickly dissipate.”