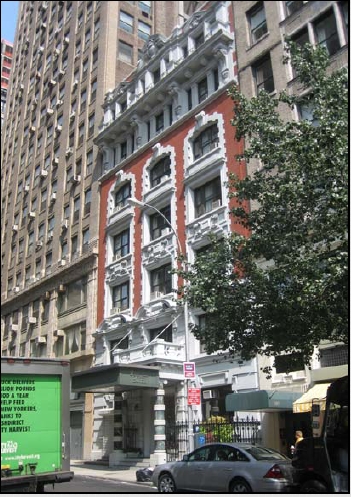 Developer Frank Savino has filed plans with the New York City Department of Buildings to take down the former Hotel Deauville at 101-103 East 29th Street between Park and Lexington Avenues, after a failed attempt by neighbors and elected officials to landmark the building.

“We’re going to have an eyesore of a building sandwiched in between some old architecture,” said Mario Messina, the president of the 29th Street Neighborhood Association who lives in a neighboring building and has pushed to save the hotel. “This glass-and-steel piece of crap is going to be in the middle; it’s not going to make any sense.”

Savino hasn’t submitted construction plans with the city and he declined to comment for the story.

The demolition filing caps a years-long push by local groups and residents to try to get the Landmark Preservation Commission (LPC) to protect the Hotel Deauville, formerly known as the Hatfield House.

Community Board 5 voted in October 2017 for the LPC to consider landmarking the property. A group of elected officials—Councilwoman Carlina Rivera, State Sen. Liz Krueger and Assemblyman Richard Gottfried—picked up the torch the next year, urging the city to landmark the building, which is squeezed between residential buildings.

Neighboring buildings and groups like Messina’s have also joined the efforts to halt the destruction.

“The seven-story, red brick and limestone hotel is also an excellent case of something that is becoming increasingly rare in New York—a building that has functioned in its original intent (in this case, a small hotel) for the entirety of its existence,” the lawmakers wrote in an Oct. 10, 2018 letter to LPC. “The Hatfield House is an important building that contributes to the surrounding Murray Hill neighborhood and is a rich piece of Manhattan history.”

However, the LPC wasn’t swayed and in November 2018 ruled that it wouldn’t landmark the building.

“The hotel’s history as an early-20th-century Beaux-Art-style apartment hotel is well represented among landmark designations, and that in comparison to these hotels, such as the recently designated Hotel Seville on the corner of Madison Avenue and 29th Street, Hatfield House is less architecturally refined, notable and prominent,” LPC’s director of research Kate Lemos McHale wrote to advocates, which lawmakers sent to CO.

Messina didn’t agree with the city’s assessment and felt it was worth saving all Beaux-Art style buildings around Gotham.

“Those are the buildings that created the character of New York,” he said. “If we continue to destroy what made New York, New York we are destroying basically the essence of the city.”

The property was built in 1901 by architect Buchman and Fox as a residential hotel called the Hatfield House. It later was turned into the Deauville Hotel. Rooms in the Deauville Hotel, which closed last year, were around $200 per night, according to undated posting by TripAdvisor. Savino bought the property from Staten Island-based owner David Schneider in June 2018 for $19.5 million, city records show.

Messina hopes to meet with Savino in the future and convince him to stop the demolition and instead renovate the existing structure.