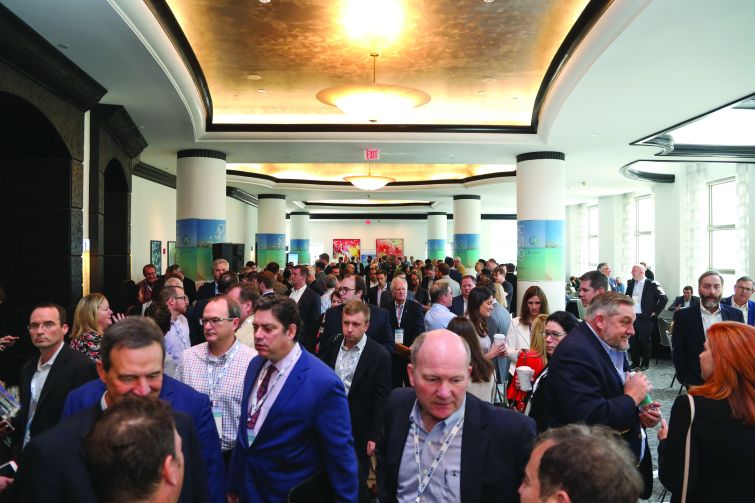 The CRE Finance Council’s (CREFC) Miami 2019 conference took place last week at the Loews Hotel with record attendance, the 78-degree weather offering a very welcome respite for some of the 1,900 attendees who left arctic temperatures across much of the Midwest and Northeast to attend.

Time waits for no man (or woman) and those who arrived on Day 1 hit the ground running, attending parties thrown by CCRE, Natixis, Ten-X, Deutsche Bank and others. The latter event—held at the Delano Hotel—had an extensive line wrapped around the block by 10 p.m., perplexing non-conference South Beach party-goers on Collins Avenue who stopped to stare, undoubtedly wondering what the hot club with a strict business dress code could possibly be.

The next day, it was time to get down to business. Overall, attendees showed guarded optimism when discussing this coming year, but caution is undoubtedly being exercised.

Some common themes prevailed in panels and conversations with attendees: Real estate market fundamentals remain strong; financial markets are increasingly interconnected; sponsorship matters more than it ever has (to every type of lender); discipline differentiates today’s market from the pre-crisis era, but leverage is creeping up; and in terms of property prices—well, they’re just too darn high.

Essentially, every asset is expensive, attendees lamented, and that’s why the debt space continues to be the belle of the ball, attracting not only a plethora of new debt fund entrants to its already-crowded turf, but also an increasing number of borrowers-turned-lenders. The debt space also has more than its fair share of investors, with sovereign fund and pension fund capital hungry for yield but simultaneously a little afraid of equity plays this late in the cycle.

All things considered, the commercial real estate market is in a pretty healthy place right now, but whether or not a market correction could come our way soon was inevitably a hot topic. Minus a crystal ball, the general consensus was that we’ll experience a correction  sometime between now and 2021, but it will look very different from the global financial crisis (phew) and be far less meaningful. Further, commercial real estate is well-positioned away from the eye of any looming storm.

(And, while attendees said they certainly see leverage creeping up in transactions, the leveraged loan market—which the International Monetary Fund estimated to be a $1.3 trillion global market in December 2018—is really what’s worth losing sleep over.)

After all, we’ve come a long way since the Wild West days of 2006 and 2007: There’s increased market discipline, there’s more skin in the game, credit is connected to longer-term capital, there’s a greater dispersion of risk and banks are solvent (of course, some of the balance sheet risk that banks once held has since been transferred to private equity firms backing non-bank lenders).

Stiff competition for deals continues, with more players and pockets of capital chasing deals and creating heightened pressure from a pricing standpoint as well as a lower return profile.

For now, it remains a borrower’s market, with a tidal wave of lenders ready and willing to step in and finance projects and bridge-to-bridge financings on transitional assets on the rise; in some cases, because borrowers aren’t successfully executing their business plans on time and in other cases simply to take advantage of the lending environment. While light transitional bridge loans are most hotly competed, those in the heavy transitional bridge lending space have a little more breathing room.

In a downturn, experience and track record are the attributes that will carry the most weight, and so newer entrants to the debt world could be the ones to suffer, especially if they don’t have asset management capabilities in their arsenal. As one attendee told CO, it’s easy to raise one’s hand and say you’re starting a debt fund, but the infrastructure has to be in place to do so and a downturn will clearly separate those who are prepared and those who are not.

Until then, firms of all stripes are starting to put recession-proof strategies in place for their businesses and are looking out for pockets of opportunity in the meantime.

Market volatility spiked in December and CRE collateralized loan obligation issuance paused, but the break was not representative of investor appetite, some panelists said, adding that the market has since thawed and CLO deals this year will likely be met by healthy investor demand. While some noted instances of more transition in CRE CLO collateral, this isn’t an alarming trend as of yet, some said.

As for trends in the CMBS sector, panelists and attendees pointed to an uptick in interest-only loans and slipping loan standards as areas of concern, as well as the continuing issue of customer service.

While volatility can be a dirty word at times, in a market where yield is hard to come by and risk-taking is rarely rewarded, a few market bumps may not be the worst thing. After all, volatility may be a gut punch when it hits, but with it comes opportunity. Indeed, some of those we spoke with are patiently waiting on the sidelines for better opportunities to pop up further down the line when volatility hits and the investment environment is less efficient.

The next shoe to drop? While retail may have been the canary in the coal mine, the office sector—with tenants taking less and less space for more employees—could be the next sector to watch, some attendees cautioned.