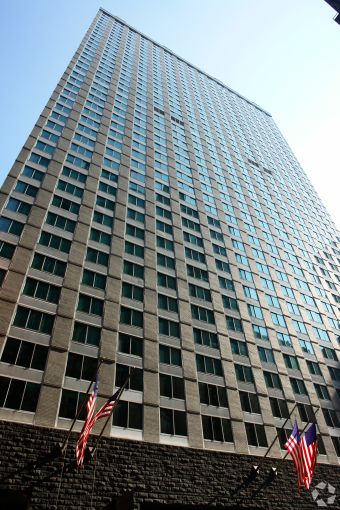 GFI Capital Resources Group and Elliott Management Corporation have sealed their purchase of the Parker New York with $350 million in financing from Bank OZK, sources familiar with the transaction told Commercial Observer.

NKF Capital Markets’ Jordan Roeschlaub and Dustin Stolly arranged the financing, while Newmark Knight Frank’s James Kuhn,  Lawrence Wolfe and Adam Etra represented the sellers in the deal, according to a release from GFI. Officials at NKF declined to comment on the transaction.

GFI and Elliott Management purchased the 42-story, 729-room hotel from the late Jack Parker’s estate for around $420 million, according to the Wall Street Journal which first reported news of the sale. The joint venture is investing $100 million to revitalize the property and will be adding 67 luxury residential condominium units in a redesign being led by architect Thomas Juul-Hansen.

“We are thrilled to acquire one of New York’s most iconic hotels. The Parker New York will complement our portfolio of legacy properties, which have created immense value for their respective neighborhoods and communities,” Allen Gross, the Chairman and CEO of GFI Capital said in prepared remarks.“It’s a rare opportunity to acquire a hotel of this scale in a world-class neighborhood. I had the privilege of meeting Jack and Norma Parker on many occasions and we are honored to continue the legacy they created, and look forward to designing, renovating, and repositioning The Parker New York to add its distinguished history. We’re going to create an unparalleled experience that breathes new life into this important and widely-visited corridor of New York City.”

The Parker New York—at 119 West 56th Street on Billionaires’ Row—was built in 1981 and most recently renovated in 2009. It includes 9,000 square feet of meeting and event space, four restaurants—including Norma’s and Burger Joint—and a penthouse swimming pool on the 42nd floor, with views of Central Park.

Hyatt will operate the hotel while GFI Capital prepares the property for its renovation, which is expected to commence in 2020. The hotel will remain open during construction, relaunching as a Thompson Hotel in 2021. The new condos will boast floor-to-ceiling windows, and offer hotel services and amenities.

GFI is the developer behind the Ace Hotel New York and NoMad Hotel as well as The Beekman, which it also developed in partnership with Elliott Management. The latter landmarked property was previously the then- vacant 19th century Temple Court Building and Annex before being transformed into a luxury lifestyle hotel and adjoining condominium tower; the developers will be taking a similar approach to reimagining a new experience at the Parker New York.

Officials at Elliott Management didn’t immediately respond to a request for comment.