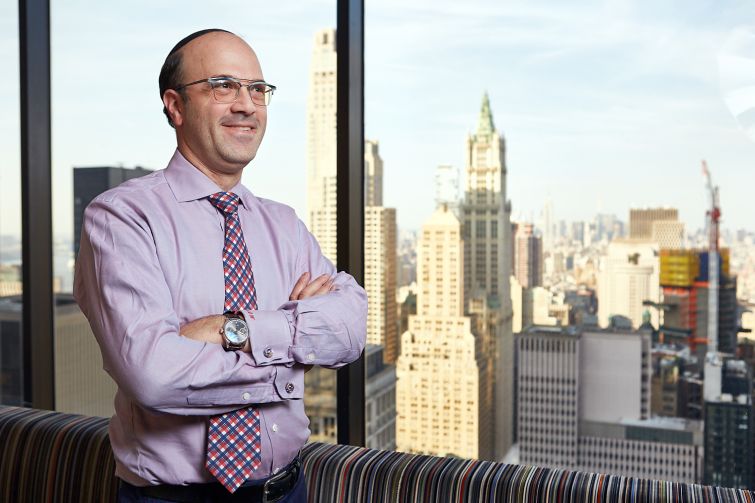 Sitting in his corner office at GFI Capital Resources Group’s headquarters on the 41st floor at 140 Broadway—from which one has an enviable view of the surrounding Lower Manhattan skyline—Michael Weiser looked back on how he got his start in the commercial real estate business in the late 1990s, when he was arranging loans for hospitality clients in areas of the country he’d never even been to.

“We were doing FFE [furniture, fixtures and equipment] loans for limited-service hotels,” Weiser recalled. “This was pre-internet; we were in that era where everything wasn’t accessible to everybody. I’m dealing with a guy in middle America, and I’m this guy in New York. That meant something—there was this instant credibility.”

At the time, Weiser was only a few years out of Brooklyn College, where he had graduated with a degree in accounting—“the best background to have for anything related to the business world,” he noted. Having recently been granted the opportunity by his father-in-law, GFI Founder, Chairman and CEO Allen Gross, to help launch a new equipment leasing division at GFI Capital, he developed contacts that gave him inroads into the hospitality sector. Before long, he found himself calling hotel proprietors across the U.S. and helping them finance upgrades to their properties (think replacing room keys with electronic keycards).

From that point, it was, “Bye-bye, equipment financing,” as Weiser put it. By the early 2000s, he found himself as one of the “co-captains” of GFI Realty Services, the commercial real estate brokerage division of Gross’ multi-faceted real estate investment firm. While then-GFI broker Aaron Jungreis (who would go on to form his own firm, Rosewood Realty Group, in 2007) was the main attraction as far as the company’s investment sales platform was concerned, Weiser led the brokerage’s debt and capital markets operations.

Today, Weiser, 43, not only serves as the president of GFI Realty Services—whose 25-person team is now predominantly focused on investment sales in the New York City multifamily market—but also plays a major role in overseeing GFI Capital’s own national real estate investment portfolio as the firm’s managing director of acquisitions and dispositions.

That means that in addition to running a brokerage that handled nearly $648 million worth of property transactions in 2017, Weiser has helped assemble a collection of multifamily and hotel assets scattered across the country—from New York to Kansas City, Mo., and from the suburbs of Dallas to Savannah, Ga. Through its various affiliates, the company today owns and manages approximately 16,000 apartment units and 1,600 hotel keys located throughout the country.

In the process of building that portfolio, he’s helped realize Gross’s evolving vision for GFI Capital: to gradually retreat from its traditional New York City stronghold in favor of lower-basis, higher-yield investments in markets across the U.S. In fact, GFI has steadily divested many of its multifamily holdings in the five boroughs and is no longer actively looking to invest in multifamily properties in New York City “as a general rule,” Weiser said.

“Michael’s been great in predicting the markets that have improved greatly over the last several years,” Gross said of his son-in-law’s contribution to the firm’s investment strategy. “He’s been very instrumental in seeing where the future growth in the country is and translating that into what a future acquisition should look like.”

Gross said Weiser’s “analytical” approach has proven critical in finding new opportunities at a time when an ultra-competitive, increasingly expensive New York City market has led it to look elsewhere in search of returns. (GFI Capital’s retreat from the New York market has also helped it avoid conflicts of interest within its New York City-exclusive brokerage operations, Weiser noted.)

“What we always try to buy are properties where we can add value,” Gross said. “New York City has become very, very competitive and the returns are just not there. We pivoted to go outside New York and look for opportunities with a bigger return.”

GFI has found those opportunities in places like Kansas City, where it has had an investment presence since before the global financial crisis in 2008 and has gradually increased its exposure through its ownership of several luxury rental complexes. There are also similar investments in the Dallas suburb of McKinney, Texas, and more recently in Savannah—which GFI initially began studying around the turn of this decade as part of an effort to identify markets that would benefit from changing shipping routes via the expansion of the Panama Canal, and where it recently spent $40 million to acquire a multifamily property.

“We couldn’t successfully pinpoint where the routes would change, but the conclusion we came to is that there are certain markets that are just going to have game-changing things going on, and Savannah is one of them,” Weiser said. “Every time you’re entering a new market, you’re always cautious. But the market is exploding, and it’s got super-solid fundamentals—whether it’s jobs because of port growth, or jobs because of the logistics and industrial development to handle the port growth, or whether it’s Gulfstream [Aerospace Corp.] expanding leaps and bounds there. You just look at that and think, ‘I can make money here.’ ”

And while GFI is well known for its investments in the boutique hospitality sector—particularly the Beekman, James and Ace hotels in New York City—Weiser noted the company’s enthusiasm for the limited- and select-service hotel market, where it has investments such as its Hilton Garden Inn in downtown Detroit.

“They’re not the super sexy, hyped-up deals, but they’re good performers,” he said of the company’s investments in limited-service hotels in secondary markets. “We believe very strongly in those. We’ve got a great hotel team and, like multifamily, it’s about having a network and being able to identify and take control of deals.”

On the brokerage side, Weiser readily acknowledged the challenges facing GFI and its competitors at a time when the New York City investment sales market has failed to reach the heady highs and record deal volumes of 2014 and 2015. While the firm brokered nearly $650 million worth of transactions last year, that number dropped from more than $893 million in 2016 (a downward trend in line with many of the firm’s competitors in the New York market).

Weiser said the company is “on pace to do more than last year” in 2018, but he acknowledged that deal volume “hasn’t been where I’d like it to be.” He cited a sizable pullback from the foreign capital that drove so much activity during the peak years of the cycle, as well as lenders requiring buyers to put down more equity in deals, as factors that have made the multifamily market more difficult to navigate.

“You have to manage your sellers’ expectations and bring them down to reality,” Weiser said. “They’re going to sell [their properties] for 10 to 15 percent less than they thought they would, but they’re still going to make so much money because they bought well. Even with the years we’ve had rent freezes, they’re still sitting pretty. Show me a rent-regulated building where the rents have gone down—it doesn’t exist.”

Weiser also admitted that running GFI’s brokerage business while concurrently playing a significant role in the direction of firm’s own investment activities has proven to be, in his words, a juggling act.

“To some degree, it’s scatterbrained at times,” he said. “At the end of the day, it all comes together because it’s all real estate. But at times it’s been like trying to juggle eight balls, and I will tell you that a lot of them have dropped—I’d be lying if I said otherwise. But the great thing about dropping a ball is you learn how not to drop it next time.”

For the Brooklyn native, father of five and recently minted grandfather of one—who lives with his wife in Midwood, not far from where he grew up—it’s all been worth it as he looks to take the family business into the future. He said GFI is currently “working on some new things we’ve never done before,” including what he deemed “a multi-strategy fund” that would raise capital from partners and look to deploy it in new investments.

“In the time that I’ve been here, with all the ups and downs, I wouldn’t trade 20-plus years of experience here for anything,” Weiser said. “There are very few people who are experts in many disciplines; because of how I started here and the roles I took on, I have knowledge on more different types of assets and institutions than most people.”

Count his own boss among those who are impressed—in more ways than one.

“Michael has a method of always coming at things from a different angle and a different approach that people haven’t thought of,” according to Gross. “He balances his life; he’s a great father and he’s a very good grandfather. And most importantly, he made me a grandfather and a great-grandfather.”