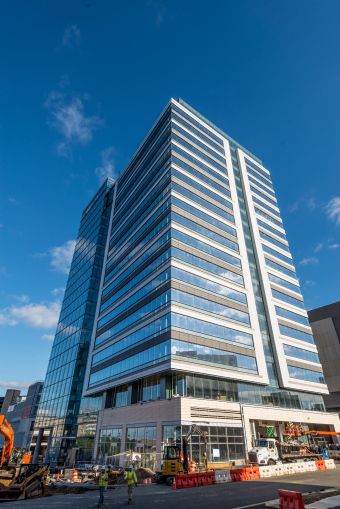 Relocating its global headquarters, Alion Science and Technology will take up 14,000 square feet at the under-construction office tower Boro Tower in Tysons, Va., according to a press release from Meridian Group and Rockefeller Group, which are co-developing the property.

The lease is for 11 years, according to a spokesman for the developers, who said asking rents at the 20-story tower at 8350 Broad Street are in the upper $50s per square foot.

Alion, which specializes in defense and national security engineering, is currently housed less than two miles away at 1750 Tysons Blvd. in McLean, Va., and will relocate from there in October.

Boro Tower is part of a new development called The Boro. Its first phase, spanning 1.7 million square feet, will be comprised of nearly 700 residential rentral units and 260,000 square feet of retail, including a Whole Foods and Kerasotes ShowPlace ICON Theaters that are slated to open by this fall, according to the release. The developers have not released details about the next phases.

“This area has much to offer our business and our employees,” Steve Schorer, the CEO of Alion, said in a prepared statement. “We look forward to all the great features of our new offices, and the amenities of the Boro community.”

Other companies that have signed leases at the tower include accounting firm KPGM, media company TEGNA and law firms Hogan Lovells and Womble Bond Dickinson, as Commercial Observer previously reported.

“We are very pleased with the caliber and the depth of our tenant roster,” Hilary Allard Goldfarb, a senior vice president at Rockefeller Group, said in prepared remarks. According to the release, the tower is currently preleased at more than 70 percent, with approximately 123,000 square feet of office space still available.