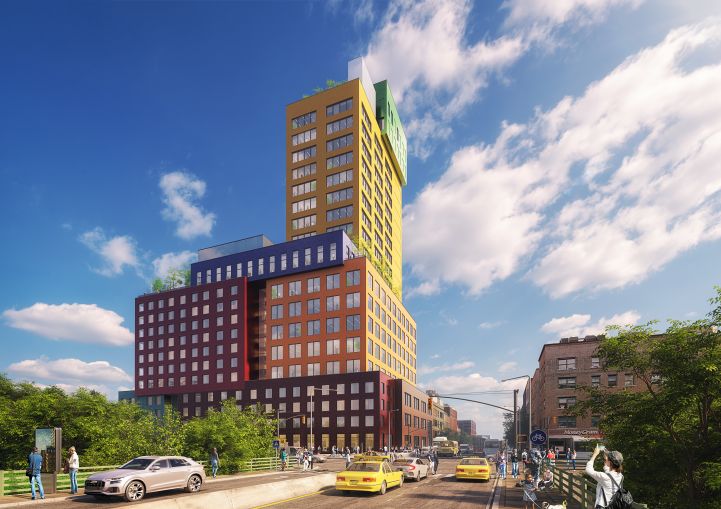 The Radio Tower & Hotel at 2420 Amsterdam Avenue will be one of the first commercial high-rises to be built in Washington Heights in decades. Rendering: MVRDV 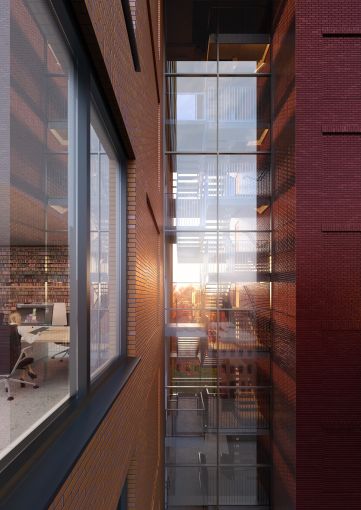 Youngwoo's Radio Tower will have a glass atrium that allows passersby to see into the courtyard from the street. Rendering: MVRDV 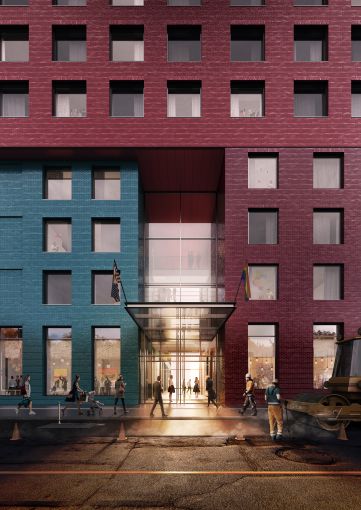 The developer hopes the building will offer spaces the community lacks, like outdoor space, new retail and offices, and a banquet hall. Rendering: MVRDV 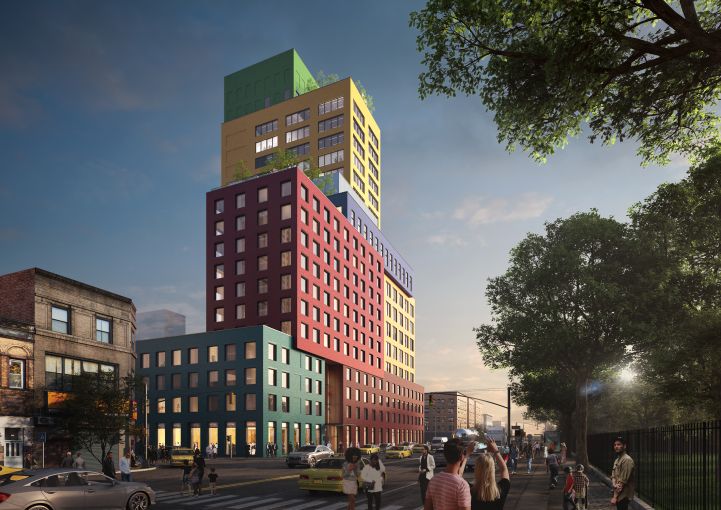 Each section of the tower will hold a different kind of space—hotel, event space, retail, office, etc. Rendering: MVRDV 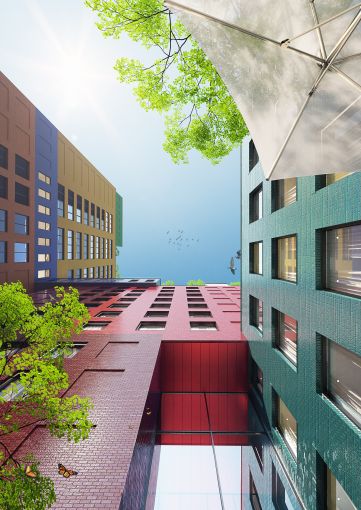 The facade will be clad in glazed brick. Rendering: MVRDV 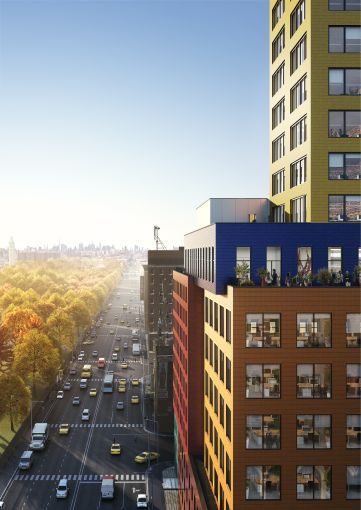 The hotel-and-office project will rise in a very visible spot that's expected to draw in tourists from the nearby George Washington Bridge and Harlem River Drive. Rendering: MVRDV
Previous Next

Youngwoo & Associates recently broke ground on a bold, multi-colored hotel and office building in Washington Heights that promises to be the first new commercial high-rise north of 125th Street in half a century.

The 22-story, 285,000-square-foot Radio Tower & Hotel will bring 155,000 square feet of office space, 221 hotel rooms and 8,000 square feet of retail to a former gas station at 2420 Amsterdam Avenue, between West 180th and West 181st Streets. It will be one of the first large office buildings to be developed in Upper Manhattan. The Radio Tower will also be the first U.S. project for renowned Dutch architecture firm MVRDV, which is known for designing whimsical, colorful buildings across Europe. The 295-foot-tall structure will resemble a stacked collection of blue, green, yellow and red blocks, assembled around an 8,000-square-foot courtyard. The facade will be clad in glazed ceramic brick, to ensure the bright exterior remains vibrant for years to come.

Winy Maas, a principal and co-founder at MVRDV, described the building as “a ‘vertical village’ with blocks that are the same size as the surrounding buildings, thus avoiding the common drawback of large developments in which new skyscrapers overwhelm the existing character of the city,” in a statement.

The design is not just meant to be eye-catching. It’s also a way to divvy up the various uses that will live in the project—offices, hotel, event space and retail. The blue volume, for example, will house 11,000 square feet of event space for weddings and parties. Youngwoo expects that Yeshiva University, which has a campus nearby, will rent it out for gatherings. The developer is even designing a portion of the building to cater to Orthodox Jewish visitors and families.

“We’re trying to program the whole building so it’s Shabbat-friendly,” said Bryan Woo, an executive vice president at Youngwoo. “A lot of the key access is electronic and manual, so they can shut off the power in that part of the building.” Orthodox guests will also be able to drop off their luggage on Fridays before sundown.

Woo said he hoped to create places where the community can gather, like the courtyard, which will be open to the public and have a coffee bar and community garden.

“It’s not only a gathering place for the hotel and office but for people in the community as well,” he explained. “The entire concept behind it is to be inclusive.”

The developer secured a zoning variance from the city to build more office space than the site’s zoning would allow, because it felt that developing a 285,000-square-foot hotel is “maybe a little too ambitious. There’s demand for hospitality but not that much demand,” Woo said.

“There’s no new office space in the neighborhood,” he added. “People are relegated to the first story of a brownstone for office space. We’re getting positive feedback from people locally that this is what they’ve always wanted.”

Asking rent for the office portion will be in the mid-$50s per square foot, but tax incentives like the Industrial and Commercial Abatement Program and the Relocation and Employment Assistance Program could bring the net effective rent to somewhere in the $30s, said Mitchell Salmon of Lee & Associates, who is leasing the building’s office and retail.