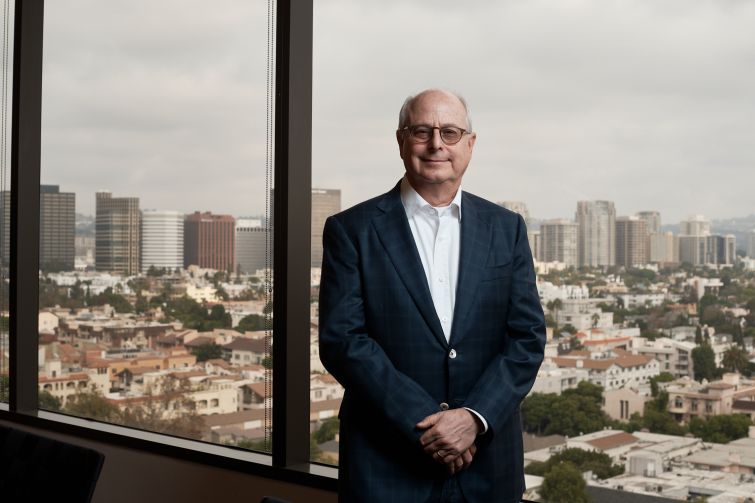 Michael Hackman, the founder and CEO of Hackman Capital Partners, would rather stay under the radar. Chalk it up to the 61-year-old’s Midwestern background or his oft-stated desire to not speak about pending acquisitions, but with his firm’s recent high-profile purchases, that desire seems highly unlikely.

The privately held, L.A.-based firm purchased The Culver Studios, a historic studio in Culver City where Gone With the Wind and Citizen Kane, among other legendary titles, were filmed in 2014. Hackman went on to purchase the redevelopment rights from Hudson Pacific Properties and Combined Properties for The Culver Steps, a 1.16-acre mixed-use project on a parcel adjacent to The Culver Studios. Amazon is a fan, signing on to be the anchor tenant at the studios last fall and has also taken the entire 75,000-square feet of creative office space at Culver Steps. More recently, The Los Angeles Times reported that Hackman was on the verge of finalizing an approximately $700 million deal to purchase another historic Hollywood property this year—the CBS Television City production and studio lot. While Hackman declined to confirm talk that he will be buying the lot, a lanyard embossed with the property’s name on his desk spoke volumes.

“I feel I do my best work in the dark. So, it’s kind of funny to me, because a lot of people are calling and talking about us and I try to tell people that it took us 40 years to get known overnight,” he told Commercial Observer earlier this month during a talk at his Century City office. The self-proclaimed workaholic—“If you ask my wife, all I do is work”—spoke about his firm’s approach to acquisitions, identifying Culver City as a market poised for growth, and why Amazon was a dream tenant to land.

Commercial Observer: You founded your firm in 1986 and you have family working for you, right?

Michael Hackman: Yes. My son and daughter both work in the company. Justin is in the construction and development side and Gabby is on the transactional side and both are extremely bright and hardworking, but they have to start at the bottom like everybody else and work their way up. I have a sister who works and heads up our marketing, Mia Hackman. And I have another sister Audrey that works out of our office in Columbus, Ohio.

I was born in Columbus, went to high school in Columbus, went to college in Columbus—Ohio State. I graduated in 1978 and moved to Los Angeles. I took a job with Ed Roski [Jr.] at Majestic Realty. I could not have picked a better group to work with. Ed is one of the largest owners in the country of industrial real estate so having the opportunity to learn everything about industrial real estate was fantastic both on the leasing and development side and to watch someone of Ed’s caliber and intelligence and ethics was a great experience.

What made you want to go to Los Angeles?

Oh, it was the farthest place on the continental United States from Columbus Ohio. I wanted a different experience and every Rose Bowl, I was in a winter jacket and I was watching young people with t-shirts and I was like, ‘let me get the heck out of here.’ At the time, Columbus was a small town of 500,000 people. Today, I think it’s the second largest city in the Midwest and has just crossed the Rubicon of being a great city.

Your firm has focused on acquiring industrial properties. Will that continue to be a centerpiece of your business?

About 10 years ago we started focusing on it and began to look at urban, infill industrial and the ability to convert that to higher and better uses. We sold a good portion of our inventory of industrial over the past several years so we could focus more on our strategy which is closer to home and in our office in Columbus. We’ve narrowed our strategy a bit.

Our thesis was, especially in Los Angeles, that as populations continue to grow and demand for space and needs grow, they just aren’t manufacturing any more land in these urban environments so the only place for development is going to come from older industrial and vintage commercial properties.

Today industrial real estate is such a high demand product type. Cap rates are very, very low, margins are very thin so where it’s a really good asset, it’s hard to make money at it today. There is a lot more value in focusing the urban industrial because until you can convert that into higher and better use, it’s easy to lease, so for us it’s a bit of a covered land play. We’re very happy keeping them as industrial, and then when the timing is right to do something that can be transformative.

We started to focus initially on Culver City. It was an area we thought was really good. We looked at the infrastructure surrounding Culver City, which included the freeways, the future Metro rail that was coming in and we thought this would be an area of great growth. If you know L.A. well you have to understand the traffic patterns. I used to kid people and say if France would have had the 405 Freeway, Germany would never have been able to cross into Paris. That’s a big influence as to the success of Culver City. We knew it was a good thesis, but we didn’t understand how good it would be. No one could predict that but we were just at the right place at the right time with a good strategy.

When did you start looking at Culver City?

You are in the process of completing The Culver Steps and landed Amazon as a tenant at both the Steps and Culver Studios. What’s the status of leasing at both properties?

The entire space [at Culver Steps] is leased to Amazon. So that represents approximately 75,000 square feet [of office] and we have approximately 40,000 square feet of retail. I can’t disclose yet, because we are finishing deals, but we’ve had 50 or 60 offers from tenants that want to come into that space. We’re trying to complete it by the end of the year so we, we’re moving very fast on it.

Was Amazon Studios your dream tenant for The Culver Studios?

Yes. When we bought this and we studied it, we understood that we had a studio that was going to turn 100 years old, which it did this past September. We also understood that we needed to modernize this facility in order for it to be competitive for the next 100 years.

Technologies have changed. The way content is created had changed. We went out and developed a plan that would modernize this facility to meet the demands of the new age companies. We always envisioned that we’d come up with a design and an approach that would fit the next generation of content creators. Being able to land Amazon Studios validated the hard work that the city and the community put into our redesign.

In terms of deals, in general how do you finance your acquisitions?

Every deal is different, but we tend to use bank financing. We’ve done a lot of work with Deutsche Bank. We’ve probably done over a billion, $1.3 billion for the financing over the last five or six years with them and we also like to use Eastdil.  [Eastdil Managing Director] Jonathan Firestone is tremendous. On the equity side, we don’t like to overleverage. We like to put equity in. So, we have ourselves a group of investors that have been together for a long time and that’s our equity.

Are they domestic or overseas?

In terms of financing, what is your take right now on the debt capital market and how competitive are loan terms for the industrial acquisitions that you are focused on?

There’s still tremendous liquidity in the marketplace. Debt is easily obtainable which is part of the problem because a lot of people are taking on a lot of debt right now. There’s a lot of discussion about interest rate increases and impacts, but I think a lot of people have been planning for it. If they haven’t, then they’re foolish. I don’t see that slowing things down right now.

Everyone asks where we’re at in the marketplace and I tell them: ‘I’m the wrong person to ask because I’m a doomsayer, always worrying when I wake up that today is the day that everything falls apart.’ I’m a bit conservative. I don’t believe cycles. Right now, this feels more to me where we were just before the dot.com bust.

We’re at a period of time where people should be very careful about the investments that they make and for us we’re focusing on quality, long-term holding, lower leverage. If you buy in great locations, quality assets, you do not overleverage, you have a long-term view, then you can defend your position.

Are there certain markets here that are marginal or more at risk? I think back to the housing boom and bust of 2008, where developers rushed to build residential developments in the West Valley and Inland Empire, like Porter Ranch and Rancho Cucamonga, and then the bottom fell out.

An area that has done well that is a market that I missed and am not necessarily unhappy about it is downtown Los Angeles. I think that’s an area that is vulnerable because they have much like the areas you were mentioning, like Rancho Cucamonga, what was the downfall?  Well there were developers who had a tremendous amount of projects, where tremendous amounts of entitlements were given away for projects and so in [Downtown] Los Angeles, it’s much easier to get projects entitled for a lot greater density then it is in other areas of the cities. And thus, developers flock there based on what they can build from their acquisition. You’re already seeing a bit of softness in the market on the residential side and I think there will be other ancillary effects as well in that location.

Looking back over 2018, would you say you are mostly focused on acquiring properties or dispositions?

We are always looking for properties. I think that we purchased maybe 10 buildings, a very small amount, very large transactions, but we look at hundreds of deals.

It takes a lot of discipline right now. Those properties that we think are of high quality, unique, we’ll pay up for quality as a company, but we’re careful. You’ve got to be careful in a market like this.

What about selling off holdings? How much were you focused on dispositions?

You know, we’re trying to basically hold everything we buy now, but, having said that, we will look at doing recaps on a portion of the assets as another way of monetizing some of the assets while maintaining majority control. Once you get these high quality, multigenerational assets, you want to hold onto them or find a way to hold onto them for as long as you can.