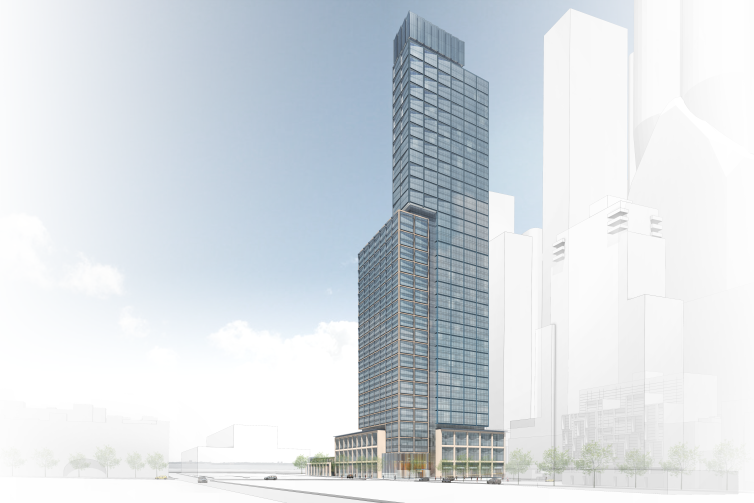 Jeffrey Levine’s Douglaston Development is shopping around for a $415 million construction loan for its planned $580 million multifamily development at 601 West 29th Street near Hudson Yards, Commercial Observer has learned.

“We expect to do very well in the capital markets for this deal,” Levine told CO. “There are few large, ground-up multifamily developments breaking ground in 2019 as a result of land being priced for condo deals, not rental. As a result, this transaction looks very attractive to potential lenders.”

Douglaston plans to erect a 58-story, 931-unit apartment tower at the site—on the corner of 11th Avenue adjacent to the High Line—designed by architectural firm FXCollaborative. The project is on a 42-month temporary certificate of occupancy construction schedule and set to wrap in 2022, according to Greystone Bassuk President Drew Fletcher, who is negotiating the debt.

The marketing for the construction financing started just over a week ago, Fletcher said. He added that there isn’t any one lender that has an inside track as of now but that the debt is fetching competition from lenders of every stripe, including foreign players, life companies, pension funds and private lenders.

“There’s been an incredible response from the lender community,” Fletcher said. “You have elite sponsorship with Jeff [Levine] and his history and track record, and the location is probably one of the single most exciting locations in the city. It’s really at the nexus of Manhattan’s most dynamic neighborhoods.” He said he has targeted a closing date at around the end of the first quarter or early second quarter in 2019.

One lender CO spoke with opined that a construction loan of this size can’t be digested by many lenders, but that heavy hitters such as Bank OZK and Otéra Capital are likely contenders to take down the financing.

“We’re having conversations with everyone,” Fletcher said. “There’s no one at this stage that has the mandate or we’re close to designating. All the major lenders you’d expect that provide construction financing in multifamily are looking at this. It’s a chance for them to make a splash in 2019 with an institutional quality sponsor.”

The rentals will be 75/25 mixed-income, under the mandatory inclusionary housing program, Fletcher told CO. The project will also receive a 35-year, 100 percent tax exemption under the Affordable New York Housing Program.