Fed Raises Rates Again but Moderates Its Outlook for 2019 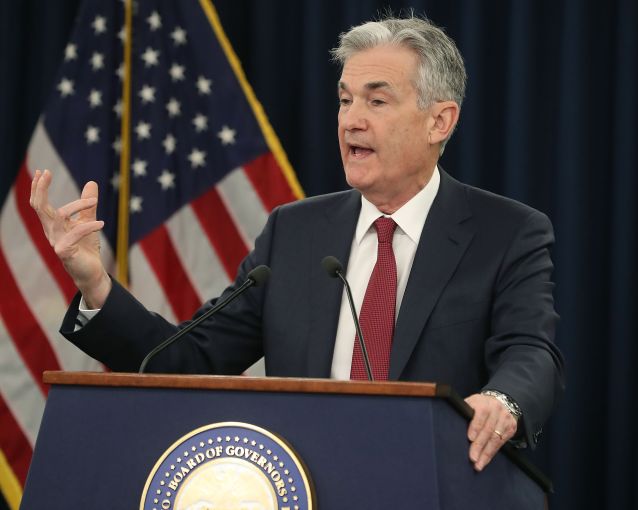 Reacting to what it called a strong labor market and a healthy level of economic activity, the Federal Reserve today raised its benchmark interest rates for the fourth time this year, the central bank announced in a statement.

The policy move brings the benchmark federal funds rate to a range between 2.25 percent and 2.5 percent—100 basis points higher than the level at the end of last year. The bank also raised the rate it pays banks for reserves kept on its account to 2.4 percent, up from the 2.2 percent level it last set in September.

“It seems appropriate that [monetary policy] be neutral,” the bank’s chairman, Jerome Powell, said in remarks after the decision was announced.

Although the Fed’s statement steered clear of commenting directly on recent turmoil in the equity markets, it did offer slightly downgraded guidance for the economy’s direction in 2019. The bank said today it expects annual gross domestic product growth of between 2.3 percent and 2.5 percent, down from its previous estimate of between 2.4 percent and 2.7 percent.

Its labor market guidance took a step back as well, forecasting that unemployment next year may not decline at all from its current 3.7 percent threshold.

Still, a rate hike is a rate hike, according to Fitch Ratings Chief Economist Brian Coulton.

“Given the stock market declines and negative international economic news…this still points to quite a bit of confidence at the Fed in the ability of the U.S. economy to withstand a few more rate hikes,” Coulton said in an email. “The downgrade to their 2019 growth forecast is pretty modest.”

That said, given that Fed-watching has always entailed giving the bank’s statements a Talmudic level of attention, new verbiage this time around cast a downbeat tone, noted Heidi Learner, the chief economist at Savills Studley.

“I think the main [takeaway] is the moderation in the language with regards to the statement,” Learner said. “Last time, as recently as last month—the sentence read, ’further gradual increases…will be consistent with sustained expansion of economic activity.’ This time, they said that ‘some’ further gradual increases will be consistent. I know that sounds minute, but that suggests that the end game is in sight” for the Fed’s program of higher interest rates.

Ken McCarthy, the principal economist for Cushman & Wakefield, homed in on another subtle change in the Fed’s prose—the addition of a clause that said it “will continue to monitor global economic and financial developments.”

“That phrase is, I think, indicating that they’re monitoring the stock market,” McCarthy said. “They’re also looking at other financial markets around the world, keeping an eye on them to make sure that they don’t have an impact. It indicates they’re clearly paying attention.”

Coulton, by contrast, was struck more by the aspects of the Fed’s comments that emphasized the bank’s intent to bat down inflation.

“We’ve still got the commitment to ‘further gradual increases’ ahead—albeit now prefaced by ‘some’—which many thought would be dropped altogether,” Coulton wrote. “The median projections have the Fed hiking three more times by the end of 2020 (compared with four in the September projections) and rates going above the Fed‘s estimates of the neutral long-run rate.”

Real estate borrowers can get slammed if and when changes in the federal funds rate exert pressure on market rates like that on the 10-year Treasury bond, but so far, those effects have been modest because the changes were well telegraphed, McCarthy said. Yields on the 10-year Treasury has climbed about 40 basis points from last December.

“These increases have been largely anticipated, and the long bond has reflected that,” McCarthy said. “Investors, realizing they’re in a rising environment, have built that in, in terms of what they’ve anticipated.”

In recent days, President Donald Trump had pressured the Fed to keep rates steady. “I hope the people over at the Fed will read today’s Wall Street Journal editorial before they make yet another mistake,” he tweeted on Tuesday in response to an opinion piece in that newspaper that advocated for holding monetary policy steady.

In his remarks today, however, Powell declared that political considerations “played no role” in the bank’s decision. “Nothing will deter us from doing what we think is the right thing to do,” he said.

Learner, for one, found that affirmation of the institution’s independence reassuring.

“Today’s statement shows they really tuned out [politics] and really went with their own analysis,” she said. “I think they’ve done a good job of not reacting.”