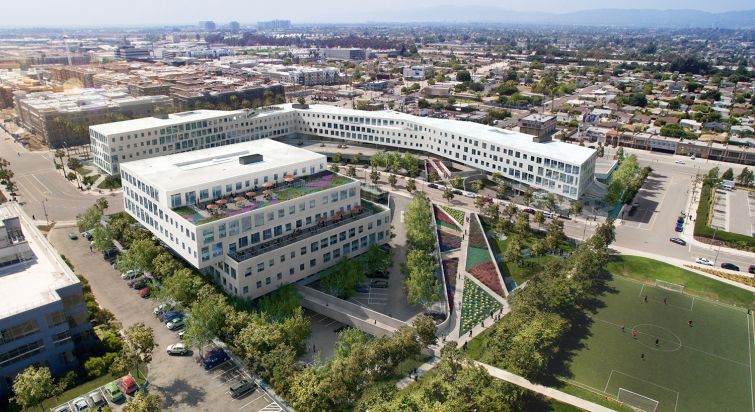 A rendering of The Brickyard in Los Angeles, Calif. Image: Tishman Speyer

Confirming rumors first whispered over the summer, Facebook has finalized a lease for 260,000 square feet of office space in two buildings in Los Angeles’ Playa Vista neighborhood, becoming the latest tech firm to solidify its commitment the up-and-coming district.

The deal gives the company a significantly expanded presence in the city with space at The Brickyard, a Tishman Speyer development about two miles north of Los Angeles International Airport. The social media giant will have the full run of one 122,000-square-foot building at the complex, and will occupy 140,000 more square feet in The Brickyard’s other structure, according to CoStar Group. Rent is $67.80 per square foot annually. The length of the lease wasn’t immediately available.

Facebook, which will be expanding into the new digs in the first quarter of 2019, is adding to its current office presence in the Playa Vista area, at 12777 West Jefferson Boulevard, per CoStar. It will continue to lease 50,000 square feet there, according to a Facebook spokesman—a figure the new deal will boost fivefold.

The Real Deal first reported that Facebook was in the mix for space in the building in July. Facebook did not respond to an inquiry, and a representative for Tishman Speyer declined to comment.

The tech company, whose stock declined more than 25 percent this year as it was walloped by negative headlines about its privacy practices, will be in good company among its ilk in Playa Vista, an L.A. haunt whose tenant list could be mistaken for a xerox of Silicon Valley’s.

The paint is still drying on Google‘s 319,000-square-foot outpost on the Hercules West Campus, in a building that was formerly the hangar for Howard Hughes’ “Spruce Goose” aircraft. YouTube, a Google subsidiary, leases 41,000 square feet nearby in a space that includes soundstages and production facilities.

Microsoft, meanwhile, has offices down the street from the new Facebook site at 13013 West Jefferson Boulevard, and Yahoo arrived on the scene in offices a stone’s throw away in 2015.

Cushman & Wakefield represented Facebook in the deal, as per TRD. A representative for the company declined to comment.