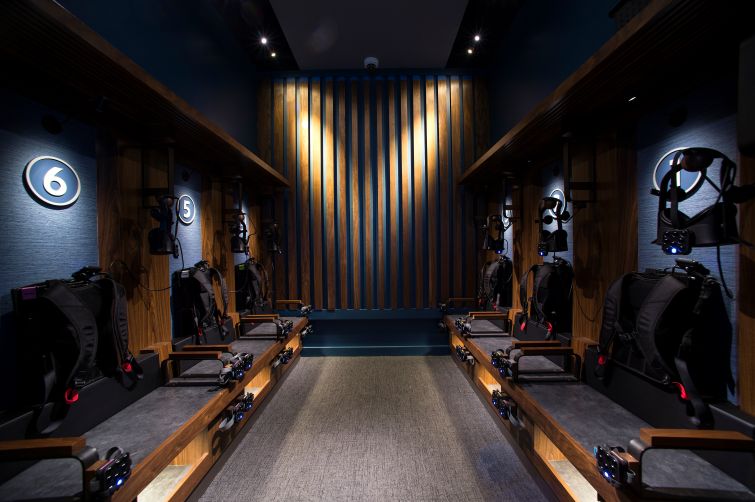 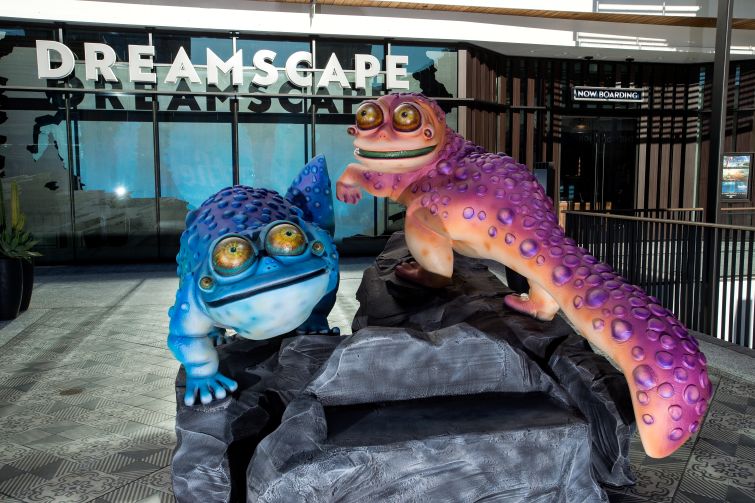 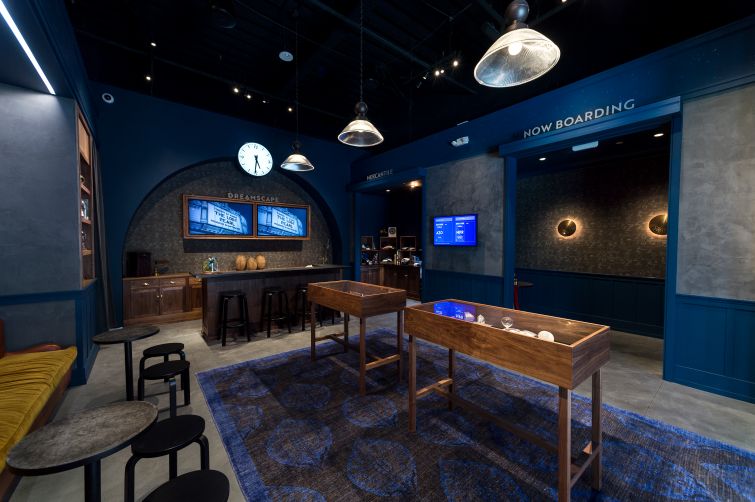 Dreamscape started as a pop-up in the Westfield Century City but opened a permanent 7,800-square-foot space. Photo: Dreamscape Immersive 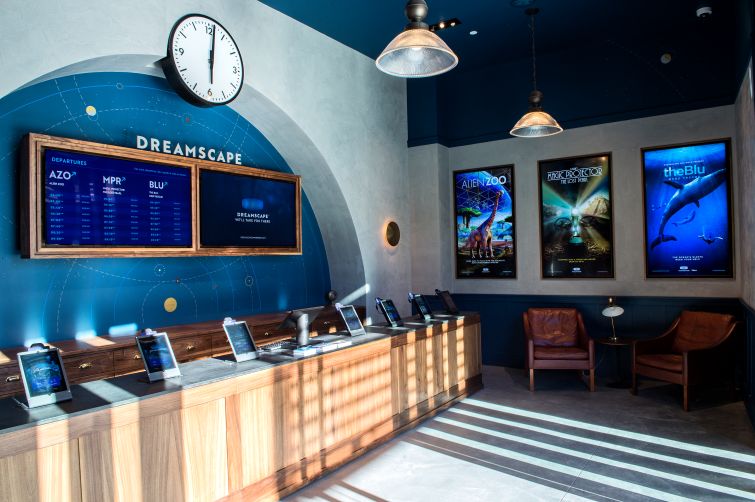 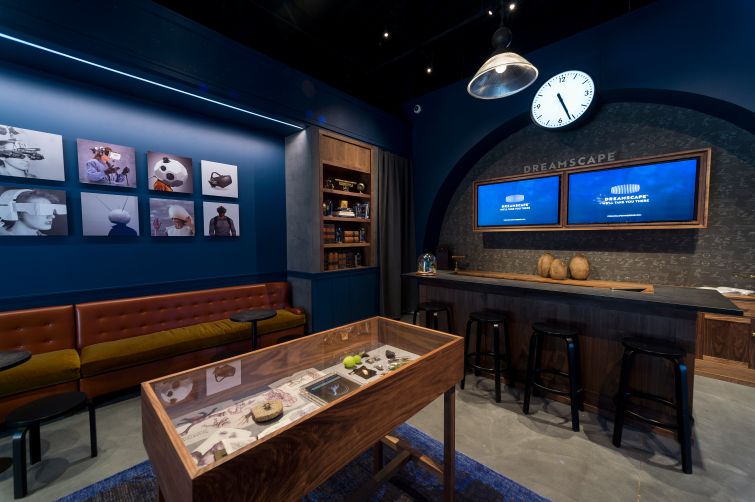 Each room has space for up to six participants. Photo: Dreamscape Immersive 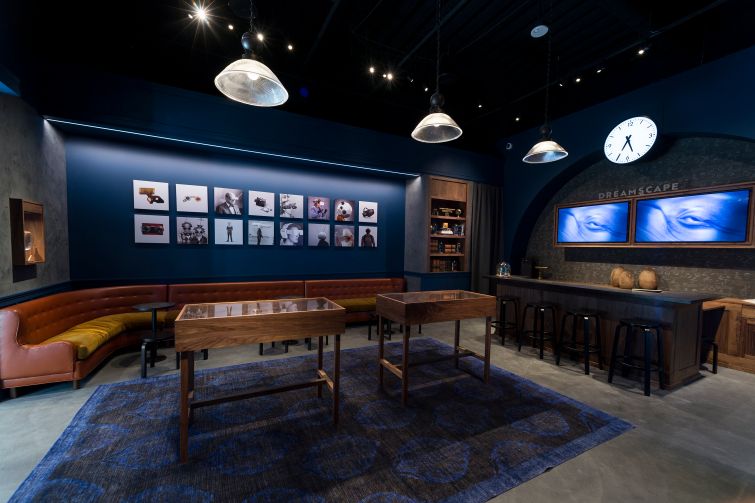 Tickets cost $20 a pop and last about 10 minutes. Photo: Dreamscape Immersive
Previous Next

Dreamscape Immersive, a creator of location-based virtual reality, has brought Hollywood to the mall—the Westfield Century City to be exact. The company behind Alien Zoo, a VR journey to a wildlife refuge in space which began as a pop-up at the Westfield property earlier this year, is reintroducing the adventure, along with two others starting today.

The 7,800-square-foot space located a few doors down from Eataly L.A., features five “pods” or rooms where up to six participants can engage in three originally devised adventures, from the Jurassic World like mission of Alien Zoo, to The Blu: Deep Rescue, a co-production with WeVR to Lavan’s Magic Projector: The Lost Pearl, an Indiana Jones style adventure where participants become part of the movie and its mission.

Ticketholders sign in and choose an avatar, male or female of differing builds outfitted similarly per each adventure. A departure lounge with a large clock and curated “artifacts,” as well as a small retail space with some apparel and books related to VR content, as well as non-alcoholic beverages (until a liquor license is secured) and snack offerings creates an area for socializing. After being ushered into a room where personal belongings are tucked away for safekeeping—including smartphones, so no distracting Snapchats or Instagram-posting—you don a backpack and headset as well as sensors on both hands and feet before being escorted into a dark room where the VR adventures begin.

At $20 a pop and with a runtime of approximately 10 minutes, the worlds evoked were strikingly distinct from one another. Commercial Observer was among two other guests—including a Hollywood producer and former European league basketball player—previewing Alien Zoo on Dec. 13.  The trio traveled to a landscape for endangered alien creatures, whose peaceful start was interrupted by an emergency featuring a nocturnal beast, torches and escape chambers. Once safely returned to a virtual earth, where, as the film intoned, humans haven’t always been the best stewards, the adventure ended and the viewers were untethered from the VR devices.

The next offering was more serene, where a group of six were sent on a rescue mission to free a baby Blue Whale and reunite him with his mother. Given the immersive tech and grand visual scale, the offering was less Finding Nemo and more Jacques Cousteau with some new age meditation.

Lastly, Lavan’s Magic Projector: The Lost Pearl was part thrill ride, part escape room. Four visitors—some of whom had imbibed at the open bar for the event, much to their regret—were plunged into an ancient temple in search of the lost pearl. (One member—dressed a few moments earlier in pointy-toed, laced-up satin pumps—complained about the ugliness of the avatars’ plodding brown shoes.) A wall suddenly divided female from male counterparts, leaving the female group to walk through the dark, cobweb-laced walkways without additional illumination. As the group (virtually) barreled through the landscape on a roller-coaster like mining cart, stomachs dropped and four-letter words punctuated the narrative.

Dreamscape, which began at the Westfield with a six-week pop-up, recently entered into a three-year lease with an option to extend their run. Westfield is a big supporter of the concept as one of the company’s Series A funders. One can see why, as it’s the latest in a variety of experiential offerings meant to drive foot traffic to retail centers —even those, like Westfield that recently underwent a $1 billion renovation.

The feeling is mutual; Vaughn said that when he joined Dreamscape, malls were already a focal point for the company’s business plan.

“Walter and his co-founder Kevin Wall had already targeted malls understanding how the business was transforming as a location. And the first thing I said, was well you also don’t want to have to create your own footfalls,” Vaughn said.

Dreamscape is not alone in its mall strategy. One competitor, “The VOID,” a VR experience offered at the Glendale Galleria in Glendale, Ca. among other locations, is based around established vehicles like “Star Wars” and “Ghostbusters.”

Though the current Dreamscape Immersive experiences are all original creations, the company is not averse to franchise-based entertainment. The plan is to house five stand-alone adventures at Westfield, both original and studio-based that will be updated on a regular basis.

Dreamscape will also be ramping up with four new stand-alone and in-theatre venues through its partnership with AMC Theatres, the world’s largest cinema exhibitor. According to a release distributed before the press event, AMC has identified a series of key markets for its new Dreamscape destinations, including the Dallas/Fort Worth, Columbus Ohio, and the New York/New Jersey metro area.  AMC will begin to introduce these locations in mid 2019. A representative for Dreamscape told CO that the partnership has selected NorthPark Center in Dallas and Roosevelt Field in New York for the rollout, but declined to offer further details.

For Parke, being able to open and operate the first site in their “own backyard in the epicenter of the creativity of this city,” is a major plus.

“It’s sort of a laboratory for us. We can try out what is the VR combination that is going to work, what is the merchandise combination that’s going to work, so that when we expand to other malls and other commercial spaces we will have sort of codified the whole thing. We will understand what works best,” he told CO. “What are the stylistic aspects of the space itself that we want to make sure translates to potential projects where we may go. It’s really valuable for us not just to build an audience, but to learn from their experiences.”