Staying Put: Nonprofits Are Fighting to Remain in Manhattan Despite High Rents 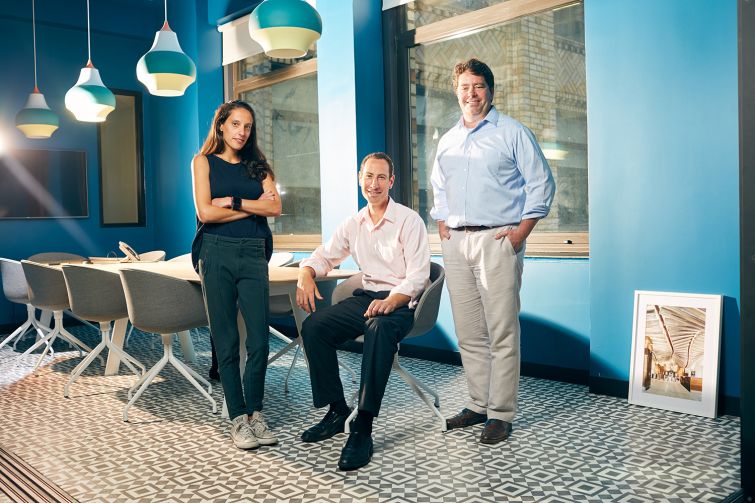 From left: AnnyRose Pahl, Brian Steinwurtzel and Eric Gural, principals of GFP Real Estate, have a reputation of being a good landlord for nonprofits. Yvonne Albinowski/For Commercial Observer

It might seem obvious that the first casualty of Manhattan’s always-surging and astronomically high rents would be the do-gooder organizations where turning a profit is beside the point.

But sick Manhattan rents haven’t pushed certain cash-strapped nonprofit organizations out of the borough. Despite the huge cost to keep offices in Manhattan, most nonprofits still don’t want to make a move to the outer boroughs because of Manhattan’s myriad subway lines, ease of commuting for board members and proximity to the donor base.

“We didn’t want it to be inconvenient to the community that we built around,” said Amrita Bhandari, the CFO of Acumen, which aims to fight poverty around the world and has offices at 40 Worth Street. “I think it would be a lot harder for a partner at a hedge fund to come to Brooklyn for a meeting with our CEO or a roundtable that we’re hosting.”

Traditionally, nonprofits found refuge in Midtown South because of the lower rents available compared to other parts of the borough. However, tech companies have started to snap up Midtown South availabilities in recent years, where asking rents, per Cushman & Wakefield, average $76.42 per square foot—even higher than in Midtown—which, as Commercial Observer recently reported, is an all-time high. So, nonprofits have flocked to Lower Manhattan in search of better deals.

“The prices are a little bit lower and the buildings are bigger,” said Ira Schuman, a vice chairman at Savills Studley who specializes in nonprofit leasing. “There are good buildings with good, solid owners.”

A recent CBRE report found that Downtown has had the biggest increase of nonprofit tenants in Manhattan from 2009 to the second quarter of this year. Nonprofits now make up 5 percent of the total tenants in Lower Manhattan, compared with 3.9 percent in 2009.

Meanwhile, Midtown South had an “exodus” of nonprofit tenants in that same time period with occupancy falling to 2.8 percent from 4.2 percent, the report found.

But the migration to Lower Manhattan hasn’t only been driven by lower rents; there’s also the transformation of the neighborhood in recent years with new office buildings, residential developments and restaurants, said David Lebenstein, the executive managing director of Cushman & Wakefield’s not-for-profit advisory group.

“They opened the World Trade Center, they opened Brookfield Place, there’s a lot of good things,” Lebenstein said. “There’s been a lot of work to promote Lower Manhattan.”

However, Lebenstein said saving money might soon be a thing of the past for Lower Manhattan, too. Previously, tenants could expect to save between $12 to $15 per square foot for an office Downtown versus Midtown, but the gap has started to shrink to only $5 to $6, according to Lebenstein.

Nonprofits play a big part in the state’s economy. As of 2012, the last year that data was available, nonprofits accounted for more than 18 percent of private employment in New York and paid a total of $62 billion in wages, the largest numbers for both in the country, according to a report from State Comptroller Thomas DiNapoli.

The sector currently occupies 12.4 million square feet of office space in Manhattan, which is up 28 percent since 2009, but slightly down from the 12.8 million square feet in 2015, according to the CBRE report. Nonprofit leasing activity is also on track this year to double from 2017.

Finding spaces for nonprofits often tends to be a lot trickier than for other fields because the sector contains a broad spectrum of uses, from schools with classrooms to social service agencies to law firms like the American Civil Liberties Union.

“The kinds of space needs that nonprofits need and the functions that they use the space for is generally more complicated than office tenants,” Schuman said.

A critical element that nonprofits look for in real estate searches is landlords that are friendly to nonprofits and may give them a break on rent or down payments. The CBRE report found that since 2013 nonprofits on average pay a 32 percent discount on taking rents in neighborhoods around Manhattan.

“It is important to have a landlord that understands nonprofits and has a lot of them,” said Lebenstein, who estimates he’s done more than 800 deals for nonprofits in his 33-year career. “A lot of [landlords] don’t and are somewhat harsh and require huge security deposits. [The nonprofit organizations] are treated like any other tenant.”

Denham Wolf, a brokerage that works only with nonprofits, even keeps a list of the best landlords for nonprofits and will try to find clients spaces in those buildings first and avoid ones with bad reputations, according to Paul Wolf, a co-president of the company.

“[Landlords have said,] ‘I don’t want people who look sick in my elevator,’ and that’s horrible and we make a note of that,” said Paul Wolf, a co-president of Denham Wolf. “They’re [also] fearful that this nonprofit is at any point going to be in financial difficulty.”

Nonprofits going into financial turmoil is a myth, Schuman said, one that he constantly has to debunk to potential landlords. He argues that nonprofits are actually one of the most stable type of tenants for landlords.

“If you look at the income statement of a nonprofit they rarely make any money, but they rarely go out of business,” he said.

Brian Steinwurtzel, the co-CEO and a principal of property owner GFP Real Estate, said landlords need to view nonprofits in a completely different light than private companies during lease negotiations.

“You’re dealing with a group of different decision makers that have different levels of experience versus one single person,” he said. “You need to be able to understand how their funding works and their ability to pay rent, which is different than looking at a regular income statement and balance sheet.”

And GFP does understand this, Lebenstein and Wolf said.

“We have probably done more deals in the buildings they’re involved with than any other landlord,” Wolf said. “[Chairman] Jeff [Gural] has always been a mensch. Eric [Gural, a co-CEO and principal] and Brian [Steinwurtzel] are also great. They’re not giving anything away, but they’re good guys.”

The family-owned GFP Real Estate, which was founded as Newmark & Companies by Aaron Gural in the 1950s, has 11 million square feet across the city and estimates nonprofits—one of the largest sectors in its portfolio—take up about 3 million square feet of it. Eric Gural said the firm often gives them breaks on prices.

Charity Water, a nonprofit that works to bring clean water to people living in rural areas, previously leased 8,363 square feet in GFP’s 200 Varick Street Tribeca. And when it needed to expand to 21,000 square feet Charity Water had trouble finding space nearby that could be built with an open-floor plan in its price range until something finally opened in GFP’s 40 Worth Street.

“The lease negotiation was about ‘How do we help you do your work,’ ” said Lauren Letta, the COO of Charity Water. “They always stay so true to their promises. When we found this great space, they helped us figure out a rent that made sense.”

The owner’s helping of nonprofits goes beyond just giving them breaks on rent. Bhandari of Acumen, who also took space at 40 Worth Street, said the Gurals make sure to buy tables at all their nonprofit tenants’ gala events and put them in touch with contractors that would give them good prices on office space renovations. “It’s not just a rental agreement,” Bhandari said.

GFP has also recently put up a ticker on its website showing the number of direct contributions the company makes to nonprofit groups, which is at nearly $10.7 million with plans to reach $14 million by the end of the year.

The company helped Charity Water and Acumen turn their spaces into an open-floor plan—contributing 70 percent of the money for it and suggesting contractors who would give them the best price—something they knew they couldn’t do in other buildings.

Switching to open floor-plans has been a major trend for nonprofits in recent years, said C&W’s Lebenstein, as executive teams at the organizations aim to make offices more “collaborative” and better spaces to work in.

“They feel like they can’t pay their people that well, and they work hard, so the least they can do is give them a work environment that’s a little more fun,” he said.

And while Lebenstein said he can’t get tenants to consider moving to the outer boroughs, GFP has started to acquire properties in Long Island City, Queens, expecting nonprofits will start to move there in the coming years.

“The rents are little more affordable and potentially the people who work there can live there, where they can walk to work,” Gural said.

“When we view an acquisition we determine, as part of that project, there will be some not-for-profits that will be apart of that building,” added his cousin, Steinwurtzel.

Wolf has said nonprofits have started to seriously look into neighborhoods around Brooklyn and he has put some into Sunset Park’s warehouse complex Industry City. In September, criminal justice reform nonprofit Vera Institute of Justice announced it would move from 27,000 square feet in the Woolworth Building in Lower Manhattan to 35,000 square feet in Industry City.

“The days of the board of directors insisting on a Manhattan location because they don’t want to go to a board meeting in the outer boroughs are weaning,” he said. “It’s more employee friendly, you get more space for the money and there are more affordable restaurants.”