The General Services Administration is not the tenant it once was—what does that mean for millions of square feet of property? 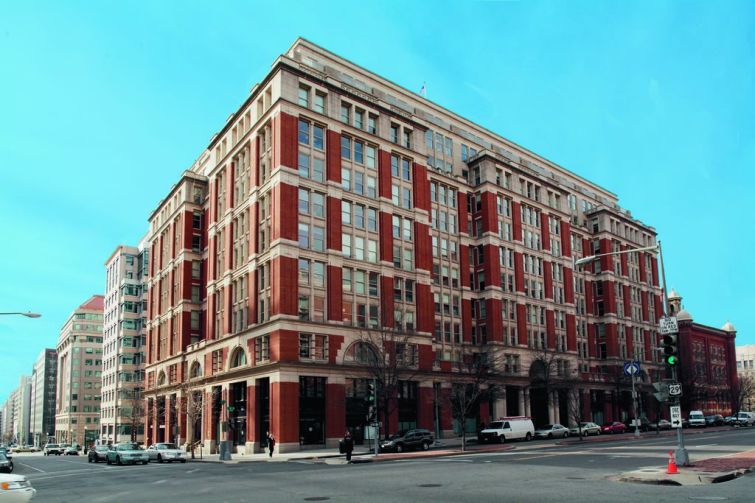 In response to the U.S. financial crisis a decade ago, the U.S. government had a simple strategy: spend a lot of money.

As a result, the General Services Administration (GSA)—which handles most of the federal government’s real estate contractions across the country—received $5.5 billion of American Recovery and Reinvestment Act funds in 2009 to renovate existing federal buildings and build new federal offices, courthouses and land ports across the country, according to records from the agency.

“They spent their way out of the recession,” said Lucy Kitchin, a senior vice president in the government investor services group at JLL. “The net result of that was a major expansion in federal leasing in Washington, D.C.” The stimulus package even created entire neighborhoods, she said, such as NoMa, named for its location north of Massachusetts Avenue and home to numerous federal and D.C. government agencies. D.C. alone has approximatively 115 GSA leases today.

The region experienced massive growth in GSA leasing between 2008 and 2010. Then, “what we refer to as ‘the hangover’ occurred,” Kitchin continued.

By 2011, Congress believed that the GSA leased and owned too much space. This scrutiny led the Obama administration to issue the Freeze the Footprint policy in 2013, which read in part: “On an annual basis, an agency shall not increase the size of its domestic real estate inventory, measured in square footage, for space predominately used for offices and warehouses.”

Freeze the Footprint essentially led government agencies to give back vacant space or consolidate into existing federally owned buildings, while signing a lot of short-term lease extensions or renewals, said Matt Lynch, the managing director of Transwestern’s government services group in D.C. The shorter leases allowed agencies to revamp their headquarters plans to downsize in the future.

Across the country, agencies achieved a 21.4-million-square-foot reduction between fiscal years 2012 and 2014, according to data from the Office of Management and Budget (OMB). In 2014 alone, for all domestic-owned building types, the government dispensed with 7,350 buildings—amassing 47 million square feet—and eliminated $17 million in annual operation and maintenance costs.

On the heel of this success, the administration issued two more policies in 2015—the National Strategy for the Efficient Use of Real Property and Reduce the Footprint, which required agencies to not only freeze, but reduce, their real estate property footprint over the next several years.

While it appears that the government is achieving its goals, it’s been “a pretty steep learning curve” for both GSA and landlords to operationalize those reductions, Kitchin said. “It’s difficult for landlords because oftentimes you get these large buildings that are exclusively leased to the federal government and all of a sudden they want to reduce their footprint by 20 percent, yet maintain the security associated with a federally leased building.”

In cases where GSA tenants entirely move out of buildings, landlords change their strategies, according to Nathan Edwards, a senior research director at Cushman & Wakefield. “Buildings that have previously leased long-term to the GSA and [that] lose those GSA tenants have often had to recapitalize [those] buildings, add amenities and do upgrades in order to transform the buildings into something that appeals to a private-sector user.”

Edwards pointed to a recent example at 600 E Street NW in the East End, one of two buildings being vacated by the Department of Justice, which is downsizing from about 1 million square feet across four buildings to 840,000 square feet at two buildings in NoMa.

S.C. Herman & Associates plans to renovate 600 E Street NW, as well as 1441 L Street NW, a property vacated by the Bureau of Economic Analysis and 1125 15th Street NW after the Department of Homeland Security leaves this year as part of a consolidation plan, according to Bisnow.

Brookfield Properties will also likely restructure 1200 K Street in Downtown D.C., which the Pension Tenant Guarantee Corporation is leaving for a move to Southwest. “They are currently trying to attract private-sector tenants and likely transition to a private sector building,” Edwards said. Neither S.C. Herman & Associates nor Brookfield Properties returned CO’s request for comment.

The developer that’s been the most challenged with GSA leasing over the past few years was faced with a mandate not related to Reduce the Footprint.

Vornado Realty Trust, one of the nation’s largest property owners, dealt with GSA tenants leaving much of the firm’s Crystal City and Bailey’s Crossroads properties due to the Pentagon’s Base Closure and Realignment Commission (BRAC), a military consolidation process that’s had five rounds since the 1980s.

According to the U.S. Department of Defense (DoD), BRAC is “a congressionally authorized process that uses to reorganize its military base structure to meet increased national security requirements.”

Headlines began to surface discussing BRAC’s impact on Vornado around August 2012, when the firm faced an estimated 2.4 million square feet of vacancies at its Northern Virginia properties.

The most beleaguered asset was the firm’s Skyline portfolio, a seven-building office park in Bailey’s Crossroads. “Washington today is experiencing the perfect storm: BRAC, the GSA trying to be more efficient, a presidential election and a budget standoff creating uncertainty. But we expect that moderate growth and limited supply over the next several years will stabilize the market,” Michael Fascitelli, the former president and chief executive of Vornado Realty, said at the time, according to The Washington Post. At one of the Vornado buildings, Fascitelli said the firm was forced to transfer a $678 million commercial mortgage-backed securities loan to a special servicer.

By December 2015, several of the Skyline office towers were almost entirely vacant or at least half-empty, The Post reported. The firm, however, was having better luck in Crystal City where it reportedly worked with local officials—who changed zoning requirements and improved bus service—to convert some of the vacated buildings into a technology hub that includes office spaces, residences and restaurants.

Less than a year later, in October 2016, Vornado was in talks with developer JBG to create an $8.4 billion merger called JBG Smith Properties that gave JBG 16.2 million square feet of Vornado’s properties in the Washington region, including 26 buildings in Crystal City—many of which were emptied as a result of BRAC.

Vornado did not respond to CO’s request for comment.

Skyline, unsurprisingly, was left out of the JBG deal. And after occupancy rates plummeted to about 40 percent and Vornado defaulted on the terms of its $678 million mortgage, according to Washington Business Journal, the 2.6-million-square-foot office complex was put up for auction in December 2016.

Not a single developer bid on the complex, which fell to about $323.4 million in December 2016 from a $680.6 million value assessment in 2009, according to WBJ. The noteholders who held the auction ended up paying $200 million for the property. By the end of 2016, Vornado announced that the firm had “no further obligations related to the Skyline Properties” and it would recognize a “non-cash financial statement gain” of roughly $486 million.

In terms of the merger, JBG Smith Properties began trading on the New York Stock Exchange in July 2017. David Ritchey, an executive vice president at the real estate investment trust, told Commercial Observer the firm has “placed a heavy emphasis on attracting a diversity of industry sectors such as associations, nonprofits and traditional corporate users” at Crystal City, pointing to recent successes such as Interstate Hotels and Resorts and March of Dimes selecting Crystal City for thier new headquarters.

Interstate Hotels and Resorts signed a 35,000-square-foot lease at 2011 Crystal Drive, WBJ reported in March. Two months later, March of Dimes announced its lease for about 28,000 square feet of space at 1550 Crystal Drive, per the publication.

Most notably, Amazon recently selected JBG Smith as its partner to house and develop a new headquarters in Crystal City and nearby areas.

Though Crystal City and Skyline were both impacted by BRAC, as well as the sequestration in 2013, Skyline was most affected by a “dramatic downturn in the desirability of suburban non-transit-oriented office parks,” which was so dramatic that it could not recover under Vornado’s reign, according to Lynch and other experts.

It appears, however, that the dust may have settled and the current owners are attempting to lease at least one Skyline tower. C&W is leasing the project but Edwards declined to speak on the firm’s strategy at this time.

While downsizing has been the biggest trend driving GSA leasing in the past several years, only about half of GSA contracts have been impacted at this point, said Marcy Owens Test, a senior vice president at CBRE. That means it will be another five or six years before the government has fully adjusted all of its leases and “the market can probably adjust appropriately for the space reduction that the government took on over that 10- to 12-year period.”

Still, some questions about the future of GSA leasing remain, such as whether agencies will move once their current leases expire.

Newer submarkets such as NoMa, Capitol Riverfront and Southwest have been able to score many GSA tenants, as they’re being priced out of the Central Business District, said Edwards, explaining that the government caps most leases at $50 per square foot. These neighborhoods, farther from downtown, have allowed federal agencies to both reduce their footprint by 20 to 30 percent and offer rents well below GSA’s max price point, he said.

But the vacant supply in those newer submarkets has nearly been absorbed, Kitchin pointed out. That means, if incumbent downtown landlords are willing to meet the market, more renewals are likely. Additionally, Kitchin said, many agencies have reduced large portions of their footprints already and “it’s easier for an incumbent to keep a tenant that is not shrinking by 20 percent.”

Landlords with older buildings should prepare for changes in codes when looking to renew GSA leases, according to Lynch, who said they may face new sustainability and safety regulations that could be costly.