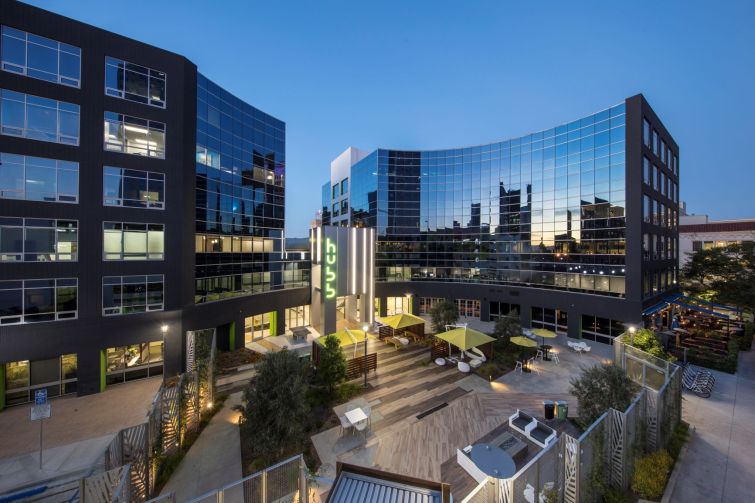 Redwood Partners shelled out $60.5 million for The Hubb in Downtown Long Beach in a deal that closed on Nov. 15, according to a release from Newmark Knight Frank, which represented the seller in the deal, a joint venture between Singerman Real Estate and Ocean West Capital Partners.

Originally built in 1986, the six-story property at 100 West Broadway includes an East Tower and a West Tower and covers a full city block in the center of downtown Long Beach. The 210,428-square-foot creative office property at 100 West Broadway recently underwent a $12 million capital improvement program completed in 2017, which included the creation of exposed ceilings, operable windows and polished concrete floors, according to the release.  The Hubb also features an indoor-outdoor amenity area known as the “WorkPark,” which provides an outdoor office environment with worktables, seating, lounge chairs and Wi-Fi stations. It also includes an adjacent six-level parking structure and is close to a Metro Blue Line station, regional freeways and the Long Beach Airport.

“They bought for its value-add potential at a very low basis in a market the seller identified as having strong growth prospects and is also underserved relative to creative office product.”

The buyer, Redwood Partners, was represented by Bob Safai of Madison Partners, who did not return calls for comment as of publication.

The property previously sold for $35.2 million—or $167 per square foot—in 2015, according to Hannan. Tenants at the mixed-use property include anchor WeWork, retailer Kings Fish House and Echo Global Logistics.