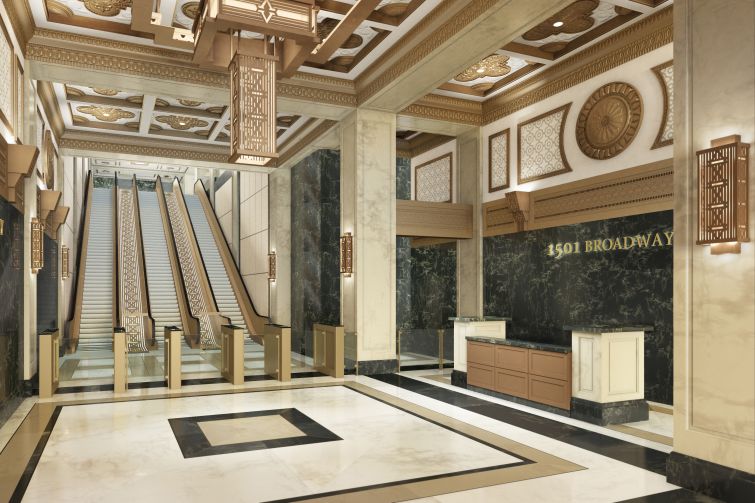 Four tenants have signed new leases or expanded in the Paramount Building at 1501 Broadway between West 43rd and West 44th Streets in Times Square, Commercial Observer has learned.

Nonprofit charter school operator KIPP Foundation finalized a 10-year, 18,680-square-foot lease for a space with a terrace on part of the 10th floor of the 33-story office building, according to landlord brokerage Avison Young. KIPP—which is short for Knowledge is Power Program—is relocating from The New York Times Building at 620 Eighth Avenue. Lindsay Orenstein, Lauren Davidson and Stephen Powers of Transwestern represented KIPP and didn’t immediately respond to a request for comment via a spokeswoman.

The second-largest deal was with a musicians labor union, the American Federation of Musicians of the United States and Canada. The group, which is the largest organization in the world that represents professional musicians, renewed its lease for a 15-year term and relocated from a smaller space on the sixth floor to 18,332 square feet on the entire ninth floor. Cushman & Wakefield represented them in the transaction.

Engineering firm Hardesty & Hanover also nailed down an expansion for the remaining 12 years of their lease. The company will grow by 17,656 square feet—from 34,344 square feet to 52,000 square feet—and take over the entire sixth floor. Eric Thomas and Richard Bernstein, also of Cushman & Wakefield, handled the deal on behalf of the tenant and didn’t immediately respond to a request for comment via spokespeople.

The smallest of the deals was with EC New York, a school that offers English language classes to adults. The educational program inked a 15-year, 16,657-square-foot lease on the 11th floor. The school is relocating from nearby 1450 Broadway. C&W’s Michael Baraldi and Charles Goldman and David Berke of Newmark Knight Frank oversaw the deal for EC and didn’t immediately respond to a request for comment.

Avison Young’s Arthur Mirante, Michael Gottlieb and Joseph Gervino handled all four deals for landlord Paramount Leasehold, which is a partnership of Levin Properties, the estate of Arthur G. Cohen and other investors. Asking rents in the building range from low $50s in the base to low $70s in the tower.

“It’s gratifying to witness how ownership for 1501 Broadway is reaping the benefits of the transformative capital improvement program and repositioning plan they executed for this historic asset,” Mirante said in a statement. “We are also pleased to see how well the market has responded, as appreciation of the significant investment and improvements made is clearly being demonstrated through the considerable amount of leasing activity that’s now taking place at the building.”

The owners of the landmarked, Art Deco office tower have just completed a $50 million renovation of the property that included new windows and elevators, upgraded corridors and bathrooms, a new marble lobby, the opening of a cafe on the ground floor and the addition of new marquee signage above the entrance. The 885,000-square-foot structure was built in 1927 and landmarked in 1988.