Owners: ‘If Money Was No Object…’ 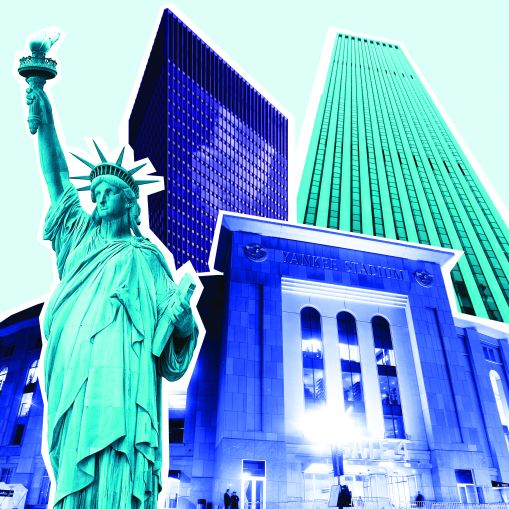 The Statue of Liberty, the Seagrams Building, Yankee Stadium and the GM Building. Compilation by Kaitlyn Flannagan.

Which trophy property would you buy if money were no object?

This was the question that (we imagined) these owners have been waiting their whole lives to answer.

“I wouldn’t tell you,” replied Charles S. Cohen of Cohen Brothers Realty Corporation, “because I may be working on it.”

Some went whole hog on the fantasy.

“The Statue of Liberty,” said Tommy Craig of Hines.

Yankee Stadium, answered Stellar Management’s Larry Gluck. “I grew up in the Bronx and have always been a huge Yankee fan …adding Yankee Stadium to my portfolio would not only be an accomplishment business wise but would be meaningful to me personally.”

But some of the fantasies sounded feasible for these owners, especially when you consider that some of the most iconic real estate is in their hands like Grand Central Terminal (T.F. Cornerstone’s Jake Elghanayan) and the Empire State Building (Empire State Realty Trust’s Anthony E. Malkin).

The Flatiron Building at 175 Fifth Avenue, the MetLife Building at 200 Park Avenue and 111 Eighth Avenue (home of Google) all garnered multiple votes. The General Motors Building at 767 Fifth Avenue was the second-most popular choice with three votes. But the one property that apparently excites the highest number of owners surveyed (four—an admittedly small sample) was the Seagram Building at 375 Park Avenue.