Nick Scribani Talks About His Path to Newmark Knight Frank 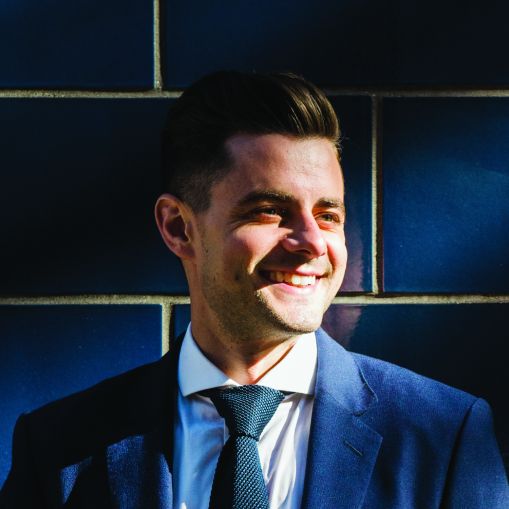 It’s been just over a year since Newmark Knight Frank’s Nick Scribani became one of the first members of Dustin Stolly and Jordan Roeschlaub’s high-powered debt and structured finance team.

Scribani, 31, has been labeled the “unofficial COO” by his coworkers, having played an integral role in building out the debt and equity group from what was just a few professionals in August 2017 into a well-oiled machine of 14 that’s firing on all cylinders.

The NKF team has had a busy year and a robust quarter so far. In October, it closed a $250 million refinance from Invesco Real Estate for Normandy Real Estate Partners, Meadow Partners and AM Property Holding Corp.’s 80-90 Maiden Lane. That month it also sealed a $187 million package for Normandy from Apollo Commercial Real Estate Finance to refinance previous debt and fund the start of construction for an office project at 797-799 Broadway in the East Village.

This year, Scribani has been involved in the closing of over $5 billion in transactions, adding to his career volume of approximately $10 billion.

Scribani chatted with Commercial Observer recently to give a quick take on the debt markets, to discuss his transition to NKF and his first year at the firm.

Commercial Observer: NKF has had a busy year. What do you think is driving that and what have you seen from your seat—looking at lenders—that’s stuck out in 2018?
Nick Scribani: I think despite the fact that there’s a bit of chaos in the market as everyone watches interest rates rise, I’m pretty confident that we still have a long way to go, just given the market’s liquidity. I think we’re in a really healthy part of the cycle, so long as deals aren’t just getting pushed [through]. Commercial mortgage-backed securities shops are still pumping out loans, and overall volume is in a good spot. With this healthy competition in a red-hot debt market space, any lack of sales is more than offset by recapitalizations and national refinances. In recognition of the LIBOR trend that’s going to continue and the rise in rates, everyone wants to act now because it still feels like you could get a better deal today than you might be able to get tomorrow. We navigate for our clients by advising them on when to strike. Sometimes it might be costly to get out of your current loan, but more often than not we’ll be able to demonstrate a path as to why it makes sense to repatriate some equity now, lower the cost of capital and right-size the debt stack and so on.

You’ve told us before that you didn’t initially think New York was an option for your finance career.
In trying to decide on where I’d start my first finance job, I vividly remember ranking cities where I had opportunities. It was Chicago, L.A., Dallas or New York, for a real estate finance gig. At first I thought, “I’m not going to New York,” because I just couldn’t fathom being in New York finance, you know; it seemed crazy to me. But, I made it to New York [starting at GE Capital in 2009]. It was the toughest path and the market timing was terrible, but I was just happy to have a job. We were doing a lot in terms of disposing of assets and trying to rebalance the book a little bit. I got plenty of exposure to workouts. Everyone around me said that it was the best time to learn because when it’s tough to put a deal together, that’s how you cut your teeth in the business. It was good exposure. I eventually thought it was time to move on. I found a job at Citigroup [in 2013] with a great team. They were certainly one of the more active shops getting into CMBS 2.0 when that was ramping up and so having access to deal flow made it a very easy decision for me. I realized that I could quickly take on as much as I could bite off.

How did the NKF opportunity come up and what appealed?
Dustin and I had overlapping social circles. The funniest part about Dustin was that he was the one guy who somehow was at every Citigroup Christmas party. The holiday party every year was a bunch of Citi people—it’s an exclusive, private thing for the team—and you look over and Dustin is having a drink with Paul Vanderslice or Joe Dyckman. It was like, “Why are you here? Who is that broker?”

Several years into my tenure at Citi, I was getting hungry for more—something different. I wanted to leverage the relationships I had formed in New York that I wasn’t able to utilize at Citi. This was around the same time Dustin was concocting this plan to make a move and—recognizing that Newmark was high on that list of opportunities—he jumped. Shortly thereafter, I’m at the beach and I get a call from Dustin. That following Monday, I met with him and we talked about his plan to build a team. That day I also met Jordan, who is Dustin 2.0—a crazy charismatic personality. I thought that with these two, we had a chance to build a juggernaut of a team. We were going to build a brand that would be institutional, polished and hungry. Newmark was a well-capitalized brand that needed a capital markets platform to place deals and mirror the things that Dustin and Jordy were already doing amazingly well. It was the perfect synergy.