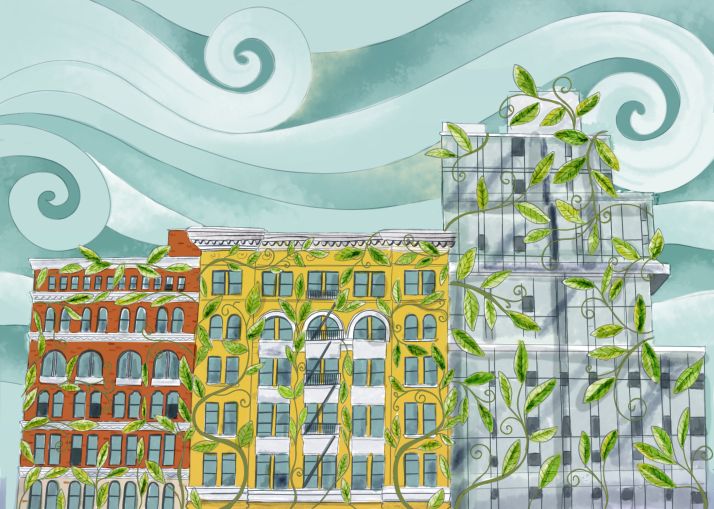 The New York City Council is getting ready to unveil a historic piece of legislation that would force big landlords to dramatically decrease their energy use. But questions remain about how the new efficiency standards will be enforced and whether the majority of small, residential buildings in the city will ever have to meet similar requirements.

In August, Councilman Costa Constantinides held a press conference on the steps of City Hall to celebrate a planned retrofitting bill for large residential and commercial buildings. The bill hasn’t been introduced yet, but the nonprofit Urban Green Council had just put out its Blueprint for Efficiency report, which has served as a model for council staff as they’ve drafted the legislation. The real estate lobby, major landlords, labor unions, environmental groups, affordable housing activists and energy companies all contributed to the report, which was the culmination of eight months of working group meetings. The 25-page framework calls for the city to create more incentives and financing programs for owners to make energy-saving upgrades, including replacing boilers, windows and roofs, sealing the openings around windows and doors, and installing efficient appliances.

The measure will target the city’s 50,000 largest buildings and become “the largest emissions legislation in the history of New York City,” Constantinides told Commercial Observer. The western Queens councilman hopes to introduce the bill sometime in the next month or two, but until then, landlords remain skeptical about what environmental requirements it will include, how they’ll be financed, and what will happen to owners that don’t comply.

“Not every building is going to be able to make the changes necessary to make the building more energy efficient,” said Frank Ricci, the director of governmental affairs at the Rent Stabilization Association (RSA), a group that represents small- and mid-sized landlords. “There was a lot of concern from co-ops and condos about how owners are stressed financially, and they’re not sure how they’re gonna pay for this.”

The goal, however, is clear: large buildings cut their energy usage 20 percent by 2030 and 40 to 60 percent by 2050. By pushing landlords to consume fewer fossil fuels and drawing more electricity from renewable energy sources, the city hopes to slash its carbon emissions 80 percent by 2050. Heating and powering buildings makes up 70 percent of New York City’s emissions, and city data shows that large buildings are the biggest energy hogs. Residential and commercial properties over 50,000 square feet—which account for 2 percent of the city’s buildings and half of its built square footage—consume 45 percent of the city’s energy, according to a 2016 report from the Mayor’s Office of Sustainability.

An early, leaked draft of the legislation first reported on by the Huffington Post called for the creation of a new city “office of building energy performance” that would establish limits on building emissions and fossil fuel usage. The draft would also require landlords of rent-regulated buildings to either meet specific emissions standards or draw at least 40 percent of their power from renewable energy sources, which means electricity generated through wind, solar power or hydroelectric power. And it would impose penalties of $268 for each square foot of a building for landlords who failed to bring their buildings into compliance four months after reporting their energy use to the city. But sources familiar with the bill said that version of the legislation was out of date and had changed significantly since that draft was written on Oct. 19. A spokesman for Constantinides declined to comment on the matter.

If it passes, Constantinides’ bill would make New York City the second big city in the world to require retrofits on buildings in order to reduce greenhouse gas emissions. Tokyo is the only city with a similar policy, per the Urban Green Council report; in 2010, it rolled out a cap-and-trade program that limits emissions for large buildings and allows landlords to buy and sell carbon credits earned by meeting certain environmental goals.

“No one’s doing this anywhere in the world right now,” said Pete Sikora, the director of climate campaigns at progressive nonprofit New York Communities for Change (NYCC). “There’s no city that has any rules for existing buildings like the ones the council is trying to enact.”

Meanwhile, Mayor Bill de Blasio already tried to unilaterally impose emissions limits on mid-size and large buildings in 2016 and 2017. But his efforts faced backlash from all sides. The Real Estate Board of New York largely opposed the proposals, arguing they would penalize smaller residential landlords. And the City Council, working on its own package of bills, expressed frustration that the mayor had done an end-run around them rather than working with local legislators, Politico New York reported last year.

But real estate pros and activists both claim that this time around will be different, because REBNY and other major stakeholders have been involved in the process from the beginning. The legislation will mandate energy-efficiency upgrades for buildings of 25,000 square feet or more. For market-rate residential, commercial and institutional properties, that will mean improvements that can often be pricey, like new heating and air conditioning systems, new roofs, adding tops to elevator shafts, upgrading building envelopes and installing new boilers. For rent-stabilized buildings, the energy efficiency standards will be much lower, because the cost of upgrades is often passed onto stabilized tenants in the form of higher rents. In addition, the bill will require low-cost upgrades that don’t qualify as major capital improvements, which are a specific range of repairs and renovations that landlords can use to justify rent increases to the state. Those cheaper upgrades include tuning up the boiler, patching air leaks, replacing steam pipes and insulating pipes. They can cut energy usage by 10 percent, according to Sikora. City-owned buildings will also be on an accelerated schedule compared with other properties; they’ll be required to reduce energy consumption 20 percent by 2025.

The Urban Green Council report also features a host of recommendations that may make it into the retrofitting bill or subsequent ones. Possible policy incentives for more efficient buildings include rewarding landlords for saving energy at peak times, shortening the city heating season, reducing the frequency of required facade inspections, and allowing owners to buy and sell carbon efficiency credits earned for meeting certain energy reduction targets. The City Council plans to work with the city and state housing departments to craft a package of programs for landlords who need a little extra cash to make upgrades, including loan guarantees, grant programs, and property-assessed clean-energy financing, which is used for energy efficiency upgrades.

Still, real estate industry groups are concerned that the regulations will be overly broad and force them to follow energy guidelines that weren’t designed for New York City buildings.

“Moving forward, it is critical that a reliable metric be developed first so that we can accurately assess targets and monitor progress,” REBNY President John Banks said in a statement, noting the organization “remain[s] committed to working with the city to address our shared sustainability goals.”

RSA’s Ricci argued that “you can’t just have one broad-brush approach and say all buildings have to do X, Y and Z. Given the configuration and the number of outside walls, some buildings can’t be any more energy efficient without knocking them down and rebuilding.” He also said he hadn’t been briefed on what kind of financing or grant programs the city would offer to help cash-strapped landlords with retrofits.

Large commercial and residential landlords like Durst Organization, which helped craft the Urban Green Council report, are worried they’ll have to pick up slack left by less-efficient, older residential buildings.

“One of the challenges in this space has been getting at smaller and older residential buildings, like single-family homes,” explained Durst spokesman Jordan Barowitz. “A lot of times they’ve been left out of the equation completely, which means you’re leaving a lot of energy savings on the table and you’re forcing larger buildings to make up for the inefficiency in smaller ones. You can’t take a hyper-efficient LEED [Leadership in Energy and Environmental Design] platinum [certified] building like One Bryant Park and increase its energy efficiency by 30 or 40 percent without just emptying the building of people and use. If you really want to reduce carbon you need a program that applies to every building in the city, both large and small.”

Sikora said NYCC and other activist groups plan to push for another piece of legislation that would impose emissions requirements for buildings smaller than 25,000 square feet. But Constantinides didn’t want to discuss it. “I will never say we’re not looking at other opportunities,” he said. “We’re just focused on getting this bill right, because when we do it’ll be a huge benefit to the City of New York.”

The enforcement piece of the puzzle also remains a little unclear. City law already requires owners of buildings larger than 25,000 square feet to report their energy usage to the Mayor’s Office of Sustainability through an online portal. That data could be used to enforce the emissions standards initially, Sikora said. If landlords refuse to comply after a certain number of years, they will likely face enforcement actions and fines, but the structure of the fines and what agency would impose them has yet to be determined, according to Constantinides.

Then there’s the possibility of incorporating retrofitting incentives into rent-regulation laws or tax abatements. New York State’s rent-stabilization laws are coming up for a vote in June 2019, and housing activists hope they can fundamentally reform major capital improvements. Ideally, landlords would be able to make efficiency upgrades without jacking up rents. But policy experts think that’s unlikely. A more feasible option might be updating J-51, a tax abatement program that grants owners a tax break for making upgrades to older buildings and requires them to give rent-stabilized leases for the duration of the benefit.

“The J-51 program is the most natural tool to try and use,” said Moses Gates, a housing policy adviser at civic group Regional Plan Association. “The issue is the J-51 program is largely geared towards the renovation problems of the 1960s, [like] cold water to hot water. When it comes up for renewal in 2019 or 2020, that’s something that should be revisited and improved with new energy-efficient standards. That’s the most natural transition for small rehab projects to become energy efficient.”