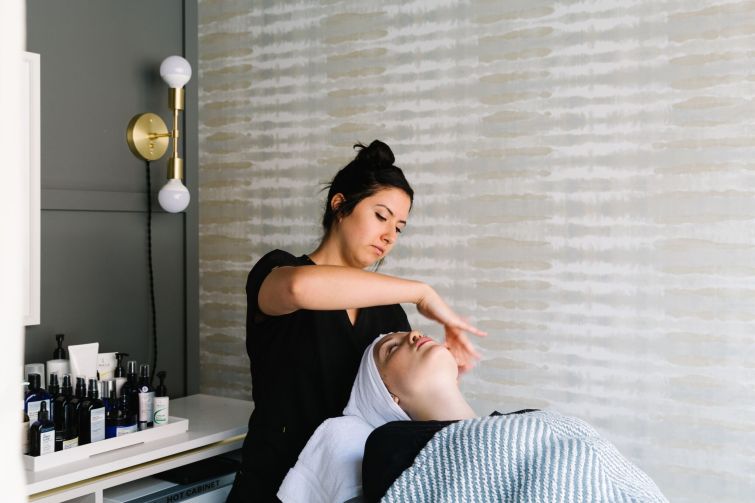 A skin therapist at Heyday's branch on the Upper East Side of Manhattan. Photo: Heyday

Facial-shop company Heyday raised $8 million in Series A funding, spearheaded by Fifth Wall Ventures with participation from existing investors such as Lerer Hippeau and Brainchild Funding and newcomers M3 Ventures and CircleUp, according to an announcement.

The funding will help fuel the brick-and-mortar expansion of Heyday in Los Angeles and ultimately nationwide. Heyday currently operates five locations in New York, where it was founded, and opened its first Los Angeles shop at 7228 Beverly Boulevard in West Hollywood this past July.

In addition to physical outposts, Heyday, whose self-declared mission is to take the “facial out of the spa” and make it part of a regular, more accessible integrated self-care regime, includes a digital and e-commerce platform where customers can book appointments, subscribe to monthly service plans, buy skin-care products and get professional advice.

“Heyday is a company we are incredibly excited about,” Brendan Wallace, co-founder of Fifth Wall, told Commercial Observer. “It’s a really good example of an omnichannel brand which is a big part of Fifth Wall’s built-investment strategy. That strategy, particularly in partnership with our retail real estate owners, is to identify brands we think can be the future of retail.”

Wallace said that Fifth Wall has expanded its original investment thesis over the last six months to not only focus on property-oriented tech as a way to connect “new, young, dynamic companies” with “large incumbents in the real estate industry,” but to also support the firm’s large retail real estate partners, including Macerich, by backing new brands, particularly those digitally native or omnichannel ones.  Other retail brands recently backed by Fifth Venture include coworking company Industrious, outdoor product retailer Cotopaxi and custom furniture brand Interior Define.

Adam Ross, co-founder of Heyday, said “given that real estate is going to be a key pillar of our business and that they [Fifth Wall] seem to have a long-term view toward building brands across the country, their values and ours aligned.”

“We’re under no obligation to do anything with their partners,” he added, “but if there are developments or buildings we want to go into with their partners, that’s fantastic, that’s a win. For us that’s something that is going to evolve as we open more locations here.”