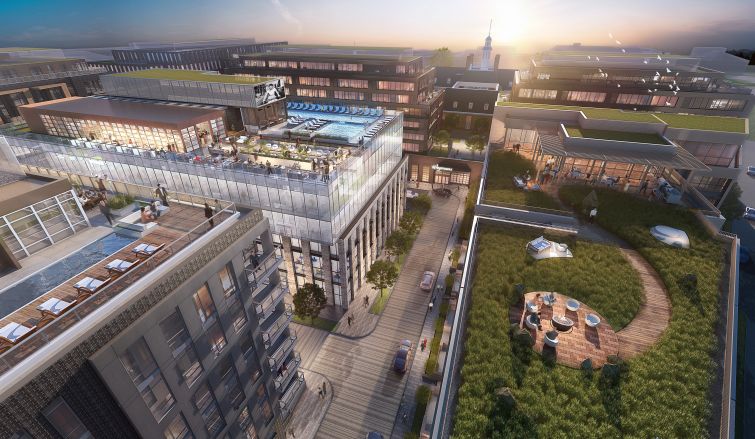 Washington, D.C.-based real estate firm Roadside Development and North America Sekisui House, a subsidiary of Japan’s largest home builder, have announced that their $640 million 10-acre mixed-use development near the McLean Gardens neighborhood of D.C.—to be called City Ridge—will break ground this Saturday, according to a press release from the companies.

“In a city full of architectural history, we are building City Ridge at one of the district’s most storied sites,” Richard Lake, a principal at Roadside Development, said in a prepared statement, referencing the former longtime headquarters of Fannie Mae at 3900 Wisconsin Avenue NW.

The firms purchased the campus in 2016 for $85 million. Fannie Mae relocated this month to Carr Properties’ Midtown Center at 1100 15th Street NW in Downtown D.C.

The City Ridge name originates from the site’s location on Wisconsin Avenue, “a geological ridgeline that separates the two stream valleys of Rock Creek Park to the east and Foundry Branch to the west,” per the release, which adds that the ridgeline was historically a path for migratory animals, then a Native American hunting trail and later a toll road for transporting goods from Georgetown to Frederick, Md. in the early 1800s.

“We’ve received numerous requests for a store in the District ever since we expanded into Northern Virginia and Maryland more than a decade ago,” Ralph Uttaro, a senior vice president at Wegmans, said in the release. “We’re eager to serve this vibrant community with the best ingredients, restaurant-quality prepared foods, consistent low prices and incredible customer service.”

The groundbreaking this Saturday will demolish the site’s non-historic structures. The developers plan to release more details about the project that day, a spokeswoman indicated.