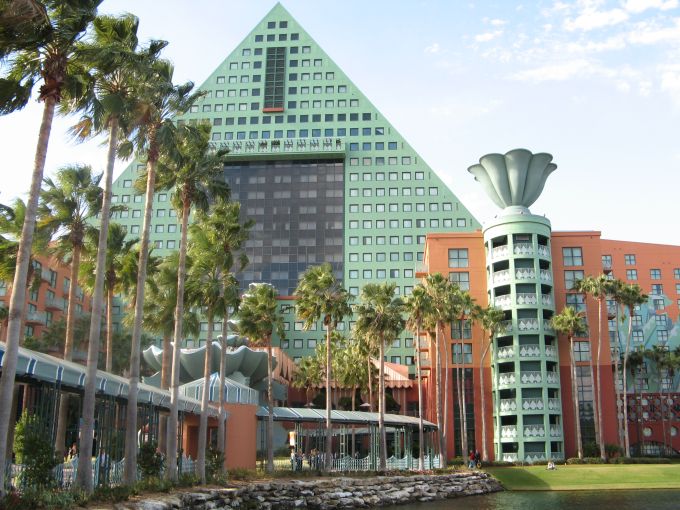 The Dolphin hotel at Disney World near Orlando. Photo: Wikicommons

Bank of America has provided Tishman Hotel & Realty and MetLife with a $627 million debt package on a pair of hotels the duo owns in Florida’s Walt Disney World Resort, according to Fitch Ratings, which analyzed the transaction.

The primary cross-collateralized mortgages in the deal, a pair of CMBS loans that total $447 million, are secured by the Walt Disney World Swan and Walt Disney World Dolphin hotels. That debt refinances $385 million of outstanding CMBS debt and knocks $45 million of preferred equity out of the capital stack. Additionally, Bank of America will deliver $180 million in subordinate debt to fund construction of a third hotel adjacent to the Swan.

Disney owns the land under the hotels but has ground-leased it to Tishman and MetLife for 99 years.

The two-year senior CMBS loans will pay an interest rate of Libor plus 1.52 percent, and come with four one-year extension options. The mezzanine debt, also good for a two-year initial term, will cost the borrowers interest of Libor plus 4 percent.

Combined, the hotels—built in the late 1980s by architect Michael Graves—comprise 2,270 rooms in a pair of buildings overlooking a lagoon on the Disney World grounds, less than a mile from the Epcot theme park’s iconic geodesic sphere. (The Magic Kingdom theme park is about two miles north.) The hotels’ immediate surroundings include 13 restaurants, spas, swimming pools, and hundreds of thousands of square feet of meeting space. When the third hotel—to be branded as an Autograph Collection by Marriott location—is done in early 2021, it will also serve as collateral for the Swan hotel’s portion of the debt. Marriott also runs the Swan and Dolphin hotels, which are operated as Westin– and Sheraton-branded lodgings, respectively.

Last year, the Swan’s average daily rate topped $192, up from $180.50 in 2015. Room prices for the Dolphin showed a similar growth trend. Together, the hotels earned net cash flow of $53.9 million last year, up from $47.3 million in 2016. Income from food and beverage service accounts for 42 percent of the total.

Disney’s five theme parks at Walt Disney World, which opened in 1971, drew a total of 55.9 million visitors last year, according to Fitch. Orlando, the closest big city, is the fastest growing jobs market in America and no. 2 for population growth. Development is underway on two new themed areas at Walt Disney World, based on the Toy Story and Star Wars brands.