A Rising Tide Doesn’t Lift All Boats: Where Are Market Cracks Starting to Show? 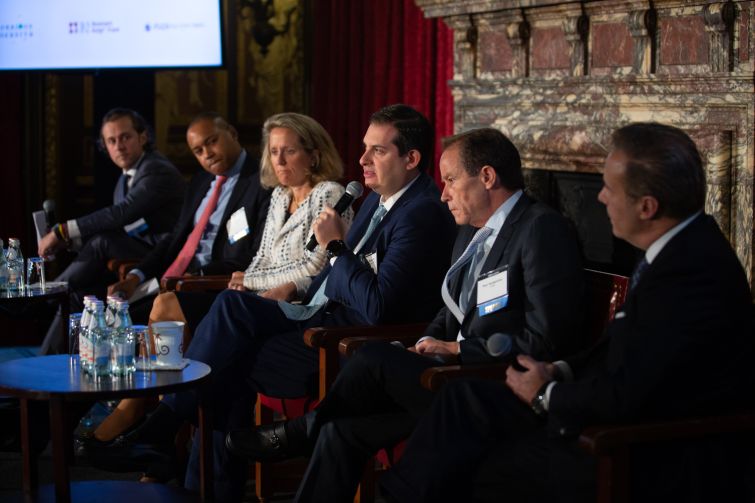 It may have been raining cats and dogs in New York City on Tuesday, but that didn’t deter some of the industry’s finest from attending Commercial Observer’s 3rd Annual Financing Commercial Real Estate Forum at The Metropolitan Club.

It was an early start for all (CO overheard one attendee tell another that the decaf coffee must be “purely ornamental”), but there was a lot to discuss, and by 8:30 am it was standing room only in the packed venue.

The commercial real estate industry is awash with capital but a rising tide doesn’t lift all boats, so Dustin Stolly, a vice chairman of NKF Capital Markets and the moderator of the “Everything’s Rosy..Or is it?” panel, kicked things off by asking panelists where they’re seeing cracks start to appear in—what has felt like—an impermeable market.

Brian Ward, the global chief executive officer of Trimont Real Estate Advisors, spoke of the excess liquidity that exists in this real estate cycle, following the depths of the financial crisis. Ward said that for five years or so he’s had the expectation that as the Federal Reserve raises interest rates, the real estate industry will be affected. However the actual occurrence of rate hikes, “continues to defy logic,” he said. “There is so much liquidity in the market, and so much kinetic energy behind that liquidity.”

Ward offered that perhaps a Black Swan event could upend the market, but for now fundamentals are strong and Trimont is experiencing 30 percent year-over-year growth.

Paul Vanderslice, the recently crowned CEO of CCRE, said that the biggest challenge for the CMBS sector currently is in finding AAA buyers. With only 15 to 20 of said buyers in the market right now, the market is “up against the wall,” he said.

Multifamily has been experiencing an extended day in the sun, with the asset class enjoying $275 billion in debt financing last year—one half of which was backed by Fannie Mae and Freddie Mac. Hilary Provinse, the head of mortgage banking at Berkadia said that eyes are continuously on on the regulatory environment in Washington D.C. (for example, The Federal Housing Finance Agency  recently set its 2019 multifamily lending caps at $35 billion for each of the enterprises) but “things are looking pretty good going into 2019.” Another indicator of things being more rosy than not is the fact that not one single loan in Berkadia’s $230 billion servicing portfolio is more than 30 days delinquent.

So if a small correction or (shudder) downturn is on the way, what might cause it?

Peter Sotoloff, the chief investment officer of Mack Real Estate Credit Strategies—which lends up and down the capital stack, from senior to mezz to preferred equity—said that the risk lies not in a real estate-centric event but rather in the corporate world.

“There are non-bank lenders out there who are squeezing EBITDA definitions,” he said. And while there’s a “ton of dry powder” hitting the market through private equity firms, there’s also newly increased leverage in the system.

Sotoloff said he has seen some exuberance in underwriting and this—paired with the over-use of leverage in the system—means there could be some pain ahead. Additionally, borrowers aren’t hitting milestones when executing business plans as the Fed continues to normalize rates which—again—could spell trouble.

Sotoloff said he doesn’t see as deep a correction this time around, however. Phew.

Mack is currently focused on light-transitional lending but isn’t afraid of high transitional at the right basis, which has given the firm an “alpha” position in the market, Sotoloff said.

KREF’s Co-CEO Chris Lee said that his firm is also drawn to light-transitional lending opportunities, but specifically in areas where there is secular demand, such as the tech markets that are performing well (for example, the San Francisco Bay area). KREF favors multifamily and office assets and is taking a more defensive position in how it’s investing Lee said: “We’d rather sacrifice yield and have a more defensive portfolio.”

When the conversation swung around to CMBS, Stolly asked panelists why Single-Asset Single-Borrower (SASB) deals are increasing (comprising 51 percent of issuance this year, compared with 40 percent last year, Vanderslice noted, adding that the average SASB deal size has also increased by around $200 million to $485 million). Two words, according to Vanderslice: “Price competitiveness.”

After all, which other segment of the market could have taken on the eye-watering $2.3 billion G.M. Building refinance in 2017, Vanderslice noted.

But, it’s hard to talk about CMBS without mentioning its biggest headwind to growth; servicing (although Vanderslice pegged this in second place to the lack of AAA buyers in his list of concerns).

Stolly ended the discussion by asking panelists what they’re enjoying the most about their individual roles and what the biggest challenges ahead are for the industry.

Panelists mentioned several highlights, including the building out of their businesses and networking with peers they’ve known throughout their careers.

But panelists agreed the biggest challenge for the commercial real estate industry continues to be the lack of diversity. “It’s less diverse than Wall Street was 20 years ago,” Provinse said.

Sotoloff concurred, but said that Mack has made a big effort to grow a diverse platform that includes a female and minority presence. “It’s not even a question. It’s a must. It makes us so much better and stronger as a company.”