It’s About to Get ‘Wonky’ in Real Estate Tech: MetaProp’s Aaron Block 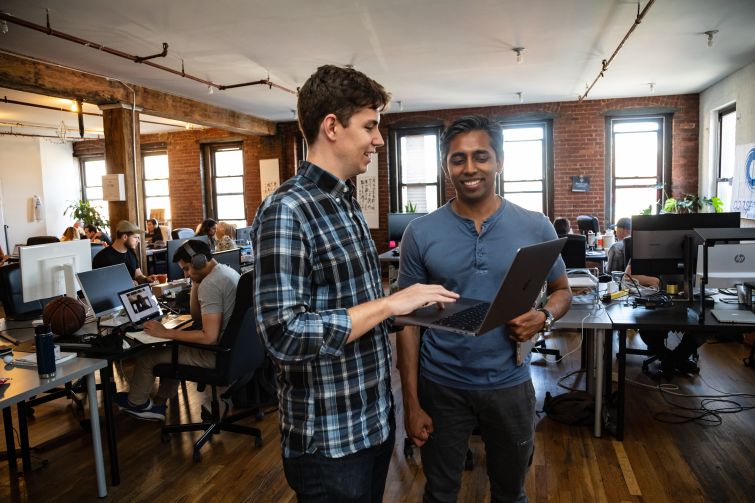 Meridio co-founders Corbin Page (left) and Mohammad Shaikh, at the company’s New York’s offices, are working to put shared building ownership on the blockchain. Shaikh said it will allow users to easily transfer shares without mountains of paperwork. Photo: Meridio

As the real estate technology sector comes into its own this year, the market has started to move away from obvious ideas to more “wonky” tech, according to MetaProp’s Aaron Block.

In the lead up to NYC Real Estate Tech Week next month, Block pointed to companies that 3-D print building materials, use digital modeling for facilities or turn buildings into “virtual power plants” as proptech trends to watch for.

“It was all [augmented reality, virtual reality] and drones before,” said Block, a co-founder and the managing director of the technology accelerator. “Now it’s increasingly this wonkier, more tech-driven technology. The adoption was a little slower because the community wasn’t quite there yet.”

The ability of this new breed of companies to get its ideas adapted quickly is one example of how the proptech market has started to mature this year, whereas before, according to Block, companies wouldn’t give them the time of day. He also pointed to an increase of foreign companies pouring into the space and investors coming from outside the real estate industry as proof of its advancement.

A MetaProp report from earlier this year found that proptech investor confidence reached an “all-time” high in the first six months of 2018. It also found that $12.6 billion was invested in proptech startups in 2017—a huge jump from the $4.2 billion in 2016.

“The market is kind of in the second inning or the third inning,” he said. “This is really a coming-of-age year.”

MetaProp’s fourth annual NYC Real Estate Tech Week will be held at various spots in Manhattan from Nov. 5 to Nov. 9 and will include panels, roundtable discussions, demonstrations and more. Its flagship event is the MIPIM PropTech Summit on Nov. 6 that’s focused on the future of the market. (Disclosure: Commercial Observer is a media partner in this year’s event.)

For anybody taking bets on which companies might do well in funding this cycle, Block said Blueprint Power—a company that helps buildings sell excess electricity—and Meridio were two to keep an eye on.

Brooklyn-based Meridio aims to remove shared ownership of buildings from limited liability companies and put them on the blockchain where people can easily transfer ownership stakes. The company recently brought the first asset—a multifamily building in Bushwick, Brooklyn—to its platform and have 70 more in the pipeline.

“There were 15 old-school real estate investors—some of them don’t even own iPhones—but they were willing to learn and own blockchain shares,” said Mohammed Shaikh, a co-founder of Meridio. “Now we’re looking at large office spaces, hotels, retail and a bunch of single assets.”

Block said that increasingly these “old-school” real estate companies and investors have been willing to embrace proptech, as is an influx of people who are new to real estate, many of whom will be attending this year’s event.

“The interest in proptech is broader than just the initial group of enthusiasts,” Block said. “The events that are now being produced are representative of that depth.”

Block said that some bigger companies have even started to create “sandboxes” in their organizations to test out new technology before expanding it to the entire company, which was almost unheard of several years ago.

Property owner RXR Realty, a MetaProp investor, has created an in-house “innovation lab” with teams that focus on different sectors of the company’s business and regularly test tech companies’ products.

“When technology or products come out that fit within those disciplines, we’ll beta-test it,” said Scott Rechler, the chairman and CEO of RXR. “If we like what we see we ask ourselves ‘Do we like it, and we will be willing to pay for it?’ ”

Rechler said RXR mainly focuses on products related to building systems because “they’re easily understandable and you can beta-test them relatively easily.”