What’s It Woolworth?: A Brief History of the Iconic Woolworth Building 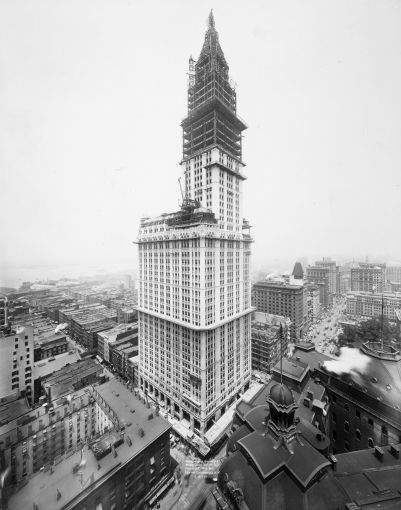 A construction shot of the Woolworth Building as it nears completion in 1913. PHOTO: NYPL Digital Collections

When retail boss Frank W. Woolworth commissioned the construction of the Woolworth Building in 1910, he reserved an entire floor for his office and built a private pool in the basement, where he would swim every morning.

Now, the upper half of the 792-foot-tall skyscraper—which was briefly the tallest in the world—is becoming condos. Woolworth’s former office is now a full-floor, five-bedroom model apartment with an asking price of $20 million. Alchemy Properties has spent the last two years transforming the top 29 stories of the 58-story building into 33 apartments, after purchasing those floors from Witkoff Group and Cammeby’s for $68 million in 2012. The building’s pale green pinnacle, which once served as a public observation deck and more recently housed a dentist’s office, is now up for sale as a $110 million penthouse unit with 22-foot ceilings and a 400-square-foot outdoor deck. The 9,710-square-foot apartment is still raw space, awaiting a buyer with the cash, “creativity and vision” to build it out however he or she wants, according to Alchemy Properties President Ken Horn.

The public observation deck drew 100,000 visitors a year starting in 1916, as the Observer reported in 2015. “For 50 cents, visitors could ascend by express elevator to the 54th floor and board a shuttle elevator worthy of a Jules Verne fantasy—encased in a cylindrical glass shaft and encircled by a spiral stairway—which pierced the gloomy space inside the pyramidal summit,” David Dunlap wrote in The New York Times in 1999.

Woolworth’s former pool in the basement is being renovated into a salt water pool with a whirlpool tub, sauna and massage room. For most of its existence, it was a Jack LaLanne Fitness Club. By 1999, the pool had been drained and abandoned.

The building’s lower 28 floors, however, will remain offices, as they have been since the building opened in 1913. Frank Woolworth, who built an empire of five-and-dime and department stores, began planning the building as a headquarters for the Woolworth Corporation in 1910. He originally envisioned it as a “modest” office building and bank for Irving National Bank, which was co-sponsoring the development of the structure at 233 Broadway, between Park Place and Barclay Street, according to a Landmarks Preservation Commission report on the property. But it evolved into the tallest building in the world and retained that title until the Chrysler Building opened in 1929. The Thompson-Starrett Company won the contract to build the 58-story tower and broke ground in April 1910. The firm was a pioneer of early skyscraper construction and built a number of historic projects, including the Equitable Building, the American Stock Exchange, the Manhattan Municipal Building and the New York State Pavilion at the 1964 World’s Fair in Queens.

When the Woolworth Building opened in April 1913, it joined the ranks of a few early New York City skyscrapers that had been built with then-new steel frame construction, which included the Flatiron Building, the now-demolished Singer Building and the Metropolitan Life Insurance Company Tower. Architect Cass Gilbert designed a neo-Gothic, brick-and-terra-cotta high-rise with a barber shop, power plant, doctor’s office, restaurant and, of course, a marble-lined swimming pool. A speaker at the building’s grand opening famously dubbed it “the cathedral of commerce.” And indeed, the three-story-high arched lobby features two frescoes, titled “Commerce” and “Labor,” glass mosaic windows, marble busts of Gilbert and Woolworth, and walls and floors made of marble imported from Italy and Greece.

Despite the property’s opulent beginnings, its grandeur eventually faded. The Woolworth Corporation sold the 932,000-square-foot building to Witkoff Group and Cammeby’s in 1999 for the relative bargain price of $126.5 million, The Times reported at the time. They spent $30 million renovating the exterior and lobby and upgrading the mechanical systems. The top 25 floors of the building were emptied of tenants as the developers debated whether they wanted to convert the floors to luxury apartments or a hotel. They remained vacant for nearly a decade until Alchemy purchased them and converted them to condos. The first residents moved in earlier this year.