The Future of Health Care Construction Must Be Collaborative: CO Panelists 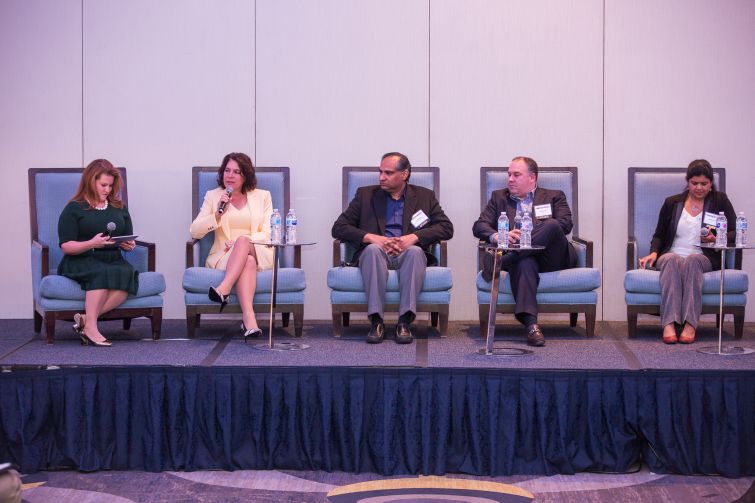 All stakeholders need to be involved from the ground up when planning new health care facilities, according to panelists at Commercial Observer’s inaugural health care construction event in Washington, D.C.

Architecture firm CRGA Design has found that the most effective way to approach new projects is hosting a three-day event for everyone involved—from health care providers and planners to patients, according to Sandy Goodman, CRGA’s president.

Goodman spoke on the first panel of the day last Thursday, which was moderated by the senior director at AKF, Jill Gardner, and held at the Washington Hilton hotel at 1919 Connecticut Ave NW. Goodman was joined on the panel by Vijay Nathan, a senior mechanical engineer at the National Institutes of Health, Lakshmi Nalluri, a vice president at JLL and Patrick Duke, a managing director at CBRE.

“When you go through all these exercises, it’s transformational for the staff—they’re excited to work together to meet this common goal,” Goodman said. “The end result is more efficient, more cost-effective and [leads to] a better patient experience.”

Joseph Kranz, a project executive and health care manager at Turner Construction Company, who spoke on the second panel of the day, agreed that a “total integrated collaborative team,” with the same goals, can help reduce time and the costs of construction.

“My utopia for construction is having that fully integrated team—all those people working together from the beginning,” Kranz said.

Kranz insisted that manufacturers who create prefabricated items such as headwalls, drywall corners, sockets and bulb heads should be among that group, noting that local hospital such as Sibley Memorial Hospital and Washington Adventist Hospital have benefited from prefabricated materials in terms of cutting time and costs.

Kranz was joined by Margaret Fitzwilliam, a director at Suburban Hospital; Tatiana Escobar, a senior project architect and associate principal at Perkins + Will; Nolan Rome; the U.S. health care director at WSP; and Greg Ward, the senior director of real estate and construction at Sibley, on the second panel, which was moderated by Joe Malfettano, a senior manager at Withum.

Both panels addressed the lack of skilled laborers in health care construction. “When we think about quality subtractors to build a hospital, our pool of people shrinks pretty small,” Kranz said. “So we’re trying to meet these schedules with limited manpower available.”

The future of skilled labor will have to be a combination of humans and machines, according to Duke. “Let’s not kid ourselves, there’s no way we are not going to teach and train humans the way we need [for them] tobecome skilled laborers out in the field—I just don’t see how that’s possible.” As a mechanical asset, Duke pointed to SAM, or the “semi-automated mason,” which can lay just over 3,000 bricks a day—more than five times faster than an average human—as CO previously reported.

In terms of interior design, there must be flexibility, Ward said. That means everything from strategically planning shelf space to building office spaces with plumbing in case they need to be turned into exam rooms.

In this day and age, Fitzwilliam said, planners must also consider security and emergency preparedness. “You need to think of those as you do the design or else you’re not going to be ready for that when the time comes,” she said.