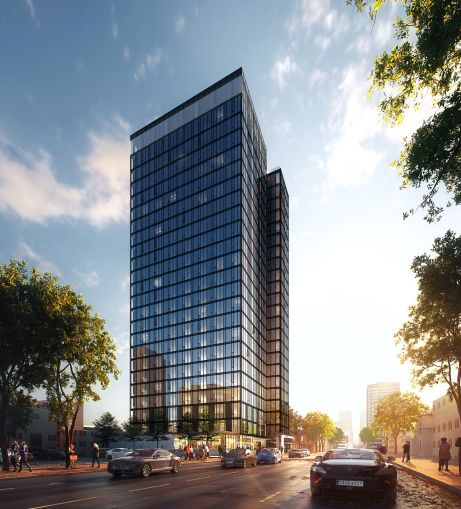 A rendering of the planned dormitory in Seattle. Photo: Quantum Capital

Fields Holdings, a prolific student-housing builder based in Los Angeles, has sealed a $64 million loan to fund construction of a new private dormitory for students at the University of Washington in Seattle, according to Quantum Capital Partners, which brokered the financing.

The five-year loan from Pacific Western Bank‘s CapitalSource arm will back work on a dorm going up at 4700 Brooklyn Avenue Northeast, which will be called The M. Set to open in time for the academic year beginning in the fall of 2020, The M will include 230 units that range from studios to four-bedroom apartments.

“Student housing typically has multiple beds per bedroom, but this project is not constructed that way,” Jonathan Hakakha, a managing director at Quantum, explained. “It has several units that young professionals can live in.”

The building’s Brooklyn Avenue address, just down the block from a Safeway supermarket, puts it less than half a mile from the northern edge of the university’s campus. The M will include 4,350 square feet of retail space at street level, and study rooms, a fitness center and an indoor basketball court.

A 56-unit dorm already stands just across the street from The M’s future site, but that building is fully leased, and expansion at the university will bolster demand for more student housing, Hakakha predicted.

“The university has announced it is adding 6 million additional square feet…which would make it a third larger than it is today,” the finance broker noted.

A representative for CapitalSource did not immediately respond to an inquiry.

College enrollment grew nationally by 0.7 percent between the starts of the 2016 and 2017 academic years, according to Realpage, a real estate analytics company—a slowdown from the average 1.3 percent pace by which the number of freshman grew over the three years before that. Annual investment in U.S. student housing clears $9 billion, as per Savills Studley research, and last year, nearly two-fifths of the investment came from foreigners.

In 2015, just 1 percent of student housing investment flowed from overseas.