The Real Estate Struggle Is Real for DC Charter Schools 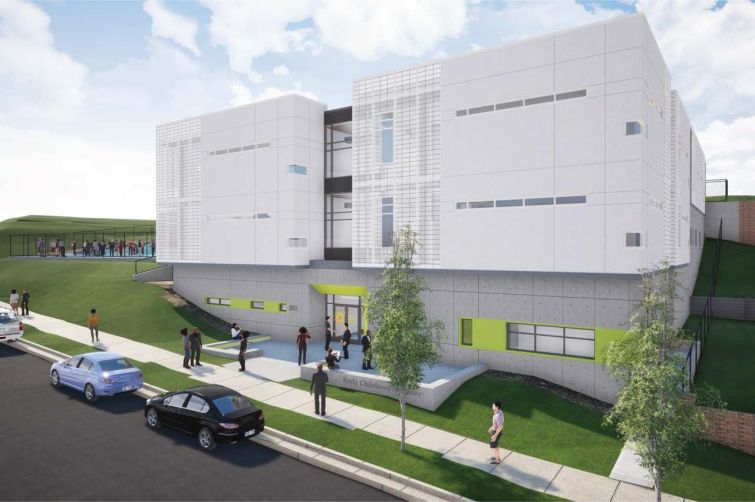 Charter school head Wendy Edwards recently inked a deal for the construction of a 38,000-square-foot school building that will house 300 prekindergarten through third-grade students in the Washington Highlands neighborhood of Southeast, Washington, D.C.

She’s partnering with D.C.-based developer and brokerage Menkiti Group, which bought the land in March 2016. The firm will oversee construction and eventually sell the building to her charter school, Early Childhood Academy (ECA). The project will cost about $18 million, said Edwards, ECA’s founder and executive director.

The deal comes after more than a decade of Edwards operating ECA at two privately owned community centers in Washington Highlands as her students couldn’t fit in one building. “From the beginning, the plan was never to stay here because it’s really not the best facility for a school,” said Edwards.

In one building, classrooms are so small that only 13 pre-kindergarteners can fit into a room instead of the ideal 20 students, she said. Edwards has also contended with decades-old electrical and HVAC systems, limited storage space and restrictions on when she could access the buildings. Since she opened in the two buildings in 2005, she’s made numerous attempts toward bettering conditions—whether trying to rent a former public school, move to a shared space with other charters or purchase and expand one of her current locations—but all of those options fell through.

Across the country, charter schools are public, tuition-free schools that are privately operated. Like traditional public schools, many of them serve elementary, middle and high school students separately, although some serve entire kindergarten through 12th grade populations. Most new charter schools begin with one grade, then add a new class each year until they reach their designated grade level.

While D.C. charter school leaders are aware that they have to find their own spaces, Edwards has learned that locating suitable and affordable facilities has, in fact, become the biggest problem for charter school administrators in the nation’s capital.

And the charter school community, at large, seems to concur.

“Charter schools have been forced into the private market where they have facilities that are expensive and do not have many of the features that you would expect in a school—a gymnasium, a field, a cafeteria,” said Scott Pearson, the executive director of the DC Public Charter School Board (DC PCSB), a nonprofit that reviews and approves charter applications and oversees schools’ academic and financial operations.

According to the DC PCSB’s 2018 annual report, there were 120 citywide charter schools during the 2017-2018 school year in D.C. They collectively educate 43,340 students, which is nearly half of D.C.’s public school students.

The biggest hurdle regarding charter facilities came during the tenure of Mayor Muriel Bowser. Since she entered the office in 2015, charter schools have not been granted access to shuttered D.C. Public School (DCPS) buildings.

But as D.C.’s population size trends upward—with at least 700,0000 residents—more students are attending traditional public schools. As a result, the Bowser administration is evaluating “both short- and long-term needs of our growing school system when determining facility designation,” said Jack Pfeiffer, the director of communications at the office of the D.C. Deputy Mayor for Education.

In the past three years, the city has converted three existing short-term charter school leases at DCPS buildings into long-term leases. However, no new buildings have been released to charter schools.

“So it’s creating a tremendous amount of pressure for charter schools,” Pearson said, adding that while DCPS’ buildings inventory is drying up, the charter school board has identified 20 vacant sites—10 of which are “very well suited for public charter schools and have been vacant for a long time.”

Pfeiffer said that the mayor has established a task force to “increase dialogue and coordination between DCPS and our public charter schools,” and a master facilities plan is also slated for completion this year.

While D.C.’s facilities allowance is one of the highest in the country for charter schools, the cost to rent and own D.C. real estate is also among the nation’s highest, said Fernando Barrueta, an executive vice president at Colliers International. Barrueta scouts properties for Building Hope, a national nonprofit that provides financial, facilities and academic support to charter schools.

For a student body of 500 kids, about 50,000 square feet of space is need, according to Joe Bruno, the president of Building Hope. About 10 years ago, a school could rent a facility for about $8 per square foot, Barrueta noted. Today, he said, that while rent can still be found on the low end, “a lot of what we see is $12 and $15 per square foot and those are very tough numbers for a school.”

About 90 percent of D.C. charter schools seek assistance from Building Hope, which has built a reputation on helping charter schools locate facilities and finance the locations. “Most of these people who start schools are on the academic side, they’re not on the business side,” Bruno said. “But running a school is running a business; you have to get more money coming in than going out, otherwise, you don’t have a business. You don’t have a school.”

In recent years though, it’s been harder for the organization to find spaces, even beyond school buildings. “In Washington D.C., it’s harder to come by attractive land or warehouse spaces—they’ve been bought up by private investors [due to] the growth in the population of D.C.,” said Bruno, adding that even if Building Hope could get hold of a property or piece of land, it would be much more expensive to purchase because of an increase in demand.

When researching properties for Building Hope, Barrueta said he’s encountered other hurdles. In neighborhoods that are rapidly changing, owners prefer short-term leases because they plan to redevelop properties into luxury apartments or mixed-used developments in a few years. And most office building landlords aren’t willing to rent space unless the school takes the entire building, which educators generally cannot afford to do. “They assume that they will not be able to rent the rest of the building to normal office tenants, which is not an unreasonable thing to think,” Barrueta said.

These days, most educators who submit charter applications with DC PCSB do so without knowing where they’re going to open their doors, according to Pearson. “They’re increasingly realizing that it’s a very tight property market,” he said. Still, three to seven educators typically apply to launch their programs each year in D.C. and about half of them are approved.

In the spring of 2017, DC PCSB gave Mashea Ashton an opportunity to open her middle school, Digital Pioneers Academy. Ashton began her career as a special education teacher at Anne Beers elementary school in Ward 7. She was committed to launching the school in the ward as the first Science, Technology, Engineering and Mathematics, or STEM, and computer science-focused charter school located east of the Anacostia River.

After being approved, Ashton quickly set out to engage with the community—elementary school principals, parent advocates and community representatives. This led her to meet Pastor Kip Bernard Banks of East Washington Heights Baptist Church, which has an education wing, in November 2017. Four months later, Ashton secured a lease in the church, at 2220 Branch Avenue SE, after the 400-member congregation voted for 125 six graders to begin classes in the fall.

Digital Pioneers spent about $500,000 to get the church’s space modernized and up to code, with the per pupil facilities dollars and a loan from the D.C. Office of the State Superintendent for Education, Ashton said.

That’s a half a million dollars to spruce it up for a one-year lease with an option to stay an additional year. “That’s a terrible use of taxpayer dollars when they could have spent that money to refurbish a public school building that they could have occupied for many years,” said Pearson, who added that Digital Pioneers is one of two schools approved in 2017 that “desperately asked for space in public buildings and were turned down.”

It’s not just new schools or one-off charters that are struggling to secure affordable spaces. California-based Rocketship Public Schools, which has a network of schools across the country, had to abandon plans for its third D.C. campus in May after running $250,000 over budget for the renovation of a floor in a building occupied by Perry Street Prep and Latin American Montessori Bilingual in Northeast’s Brookland neighborhood.

“We were going to spend so much money trying to do repairs that it would start to take away what we could do for the students, which is the main reason why we’re opening the school—to have great programming for the children and for parents to feel like the school has the resources to give their child great educational experiences,” said Jacque Patterson, a former Rocketship regional director and current chief community engagement & growth officer at KIPP DC.

“I think there should be something where if you have proven yourself as a school—take a KIPP [a network of high-performing, college-preparatory public schools] or Rocketship—you should receive some type of priority or rebate in getting school facilities—there should be something that is written into legislation,” he said. For now though, Rocketship is “back to the drawing board” on finding a temporary location.

Meanwhile, Edwards’ dream of having her own ECA building is finally coming to fruition after finding a developer who was willing to make a deal with a school—a rarity in the city.

Edwards was originally introduced to Menkiti Group through a possible expansion project at one of her community centers, which ultimately fell through. But after Menkiti bought a parcel of land near the community center—that could have been the site of new housing or another development—they reached out to Edwards about building her school there.

Burke says the firm “worked with ECA to find a way” to finance and develop the building, noting that the school’s own financial contribution was key to constructing a new school in a financially limiting real estate market. “It’s not easy, but there are ways,” he said.