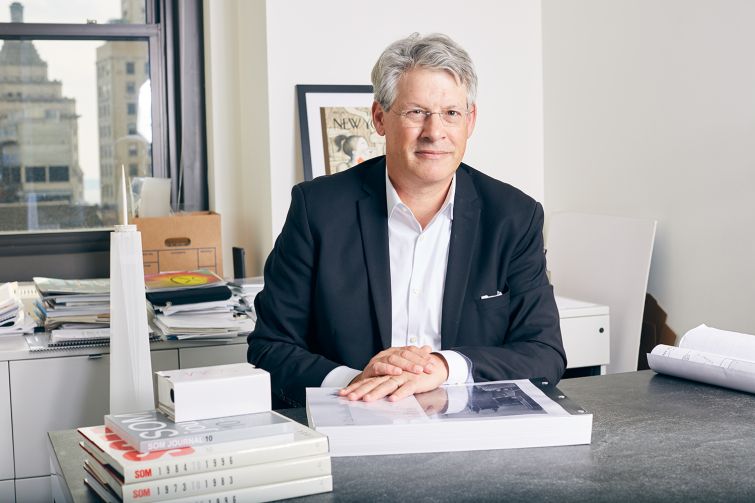 Ken Lewis of Skidmore, Owings & Merrill helped oversee the construction of some of New York City's largest projects, including One World Trade Center, a model of which sits to his left. Photo: Yvonne Albinowski/For Commercial Observer

As a 12-year-old growing up in the Philadelphia suburbs, Skidmore, Owings & Merrill partner Ken Lewis watched his next-door neighbor, an architect, renovate a “twin” house that was connected to a nearly identical, attached home.

“He completely transformed both the space and the design of the house,” Lewis said. “There’s a sense when you’re a child that everything is as it has been and as it has always been, and to see that transformation was amazing.”

His parents became close friends with the architect and his wife, who was a painter. “It became the center of my parents’ social life,” he continued. “They were all kids who were the first generation that went to college and moved to the suburbs. And they were cool.”

The architect, Norman Paul, also designed the Reform synagogue that Lewis and his parents attended in the next town over. He told young Lewis that his family had been crafting stained glass windows since the 18th century. And when the construction market in the United States would slow—as it did in the 1970s—he would leave for a while and design a kibbutz in Israel.

But constructing a synagogue was a far cry from the glass and steel tower Lewis would one day help construct along the edge of Central Park, or the controversial and iconic high-rise he would build to replace the Twin Towers. As a project manager and now one of three managing partners at SOM’s New York office (with T.J. Gottesdiener and Laura Ettelman), Lewis has spent his 30-year career overseeing some of the city’s most complex developments, from the World Trade Center redevleopment to Hudson Yards.

Designing buildings seemed like a magical job, so Lewis went to architecture school at the Rhode Island School of Design and Harvard University, picking up bachelor’s degrees in architecture and fine arts and a master’s in architecture, respectively. The now-58-year-old met Jennifer, the woman who would become his wife, during the brief year between grad school and his first architecture job at SOM, while he was teaching at Harvard.

In his spare time, he draws and sketches with his wife, who had a long career as a textile artist and designer. The pair also do volunteer work with their 24-year-old son, Sam, including going to New Orleans to build homes for Habitat for Humanity.

A year after finishing his masters at Harvard, he landed a job at SOM in 1986, laboring under legendary architect David Childs in the New York City office. In his early days Lewis worked on proposals for the West Side Railyards, which wouldn’t be developed for another two decades, and Time Warner Center, where the first set of developers to try and build on the site gave up after running into community opposition and financial ruin .

The Metropolitan Transportation Authority and the city decided to sell the parcel at West 59th Street and Central Park West to a partnership between former New York Daily News owner Mortimer Zuckerman, his real estate firm Boston Properties and Salomon Brothers for $455 million. Their architect, Moshe Safdie, hoped to build a 900-foot-tall cluster of stepped, angular towers on the property, which was then home to the New York Coliseum. However, the project ultimately died on the drawing board. Its design and height were panned by architecture critics, community boards and activists. Jacqueline Kennedy Onassis, who reportedly said that the towers were “stealing our sky,” organized a protest against the development with the Municipal Arts Society in Central Park. She, along with Bill Moyers, Paul Newman, and 800 other protesters, opened black umbrellas one afternoon in October 1987 to illustrate the shadows that the building would cast on the park. The stock market tanked a few days later, Salomon Brothers pulled out and a judge ruled that the proposal violated city zoning rules.

Zuckerman fired Safdie and hired SOM, which created a post-modern Art Deco-inspired design. Lewis and the other architects on Childs’ team worked 80 hours a week, shrank the height of the building down to 750 feet from 900, and tried to push the development through the public review process. Zuckerman, losing money by the day, gave up on the ill-fated project in 1994.

But for the young architect at SOM, it was his first taste of negotiating the design for a controversial building.

“I ultimately ended up making presentations to the community and meeting with community members who were very angry and very frustrated,” Lewis said. But he still described it as a “a great learning experience…engaging them in the project and working with lobbyists.”

Plans to develop the Coliseum site were revived a decade later, when the MTA sold the property to Related Companies for $345 million. Lewis, who had been working on an office building in East Berlin and later on the master plan for Kings County Hospital in Brooklyn, was given a promotion and a new job title: project manager. In 1998, he began overseeing the design and construction of what would ultimately become known as the Time Warner Center, under the aegis of Childs as the chief architect. “It was a transformational moment for me because it was [about] seeing how the city operated and understanding—I don’t want to say the levers of power—but really how the city has been formed,” he said.

And it was not an easy undertaking, knitting together several different owners who would control and operate the 2.5-million-square-foot mixed-use condominium.

“Time Warner Center is the ultimate mixed-use project,” said Marty Burger, who worked on the development as an executive at Related and is now the CEO of Silverstein Properties. “There were seven different uses and seven different owners in the building and they all had to live together. The hotel, the office, the retail, the parking, the Jazz at Lincoln Center all had different groups.”

Bruce Warwick, a vice chairman at Related who worked on the sprawling glass development with Lewis, noted that it was hard to make all the stakeholders happy because “everyone had their own interests and wanted it their own way.” However, Lewis “did an outstanding job” overseeing the architects as well as structural and mechanical engineers, he said.

The (relatively) freshly minted project manager was able to thread the needle on the two-tower complex, which hosts a 1,000-seat auditorium for Jazz at Lincoln Center, offices for Time Warner, an upscale mall and residential condo units. Burger explained that Lewis was able to bring his design experience to the table while negotiating with the developer, the project’s stakeholders and the design team at SOM.

“He’s very creative but understands from a development perspective that you have to make money,” Burger noted. “You can’t just design something that is in the ego of the architect but won’t work for the pocket of the developer. He’s very good at working with clients to find something cool and interesting that’s still economical.”

Next up was the rebuilding of the World Trade Center after the terrorist attacks on Sept. 11, three years before Related wrapped up its Columbus Circle megaproject in 2004. Silverstein Properties’ Larry Silverstein, who was paying hundreds of millions of dollars annually for a smoking hole in the ground in the Financial District, turned to Childs to help masterplan the redevelopment of the World Trade Center with Daniel Liebeskind. After the trio hosted a series of charged meetings, Childs took over the design of 1 World Trade Center, with Lewis as his project manager.

“I can think of no more complicated project than Tower One,” said Childs. Shepherding through the construction of the 1,776-foot-tall structure involved “coordination with the structural engineers, knowledge of defensive glass, and an interest in dealing with regulations like the environmental impact of a building,” the designer explained. The tower was designed with a 186-foot blast-proof base that can withstand the equivalent of 900 pounds of TNT [trinitrotoluene explosives]. And the plans for the highly secure building had to be drafted “under complete secrecy” and filed with the Port Authority of New York & New Jersey, while a more basic version would go to the New York City Department of Buildings, according to Childs.

Lewis is “very sensitive about design, knowledgeable about technical issues, and very good at explaining things to people,” Childs said. “With people who had lost family members in [9/11], he could come up and speak to them. Being able to do that is rare among architects—either designers or technical people. He made it much easier than it could have been.”

Although Lewis is spending less time at the new World Trade Center these days, he still has plenty to keep him busy. He is currently working on the renovation of 28 Liberty Street and the construction of the 72-story 35 Hudson Yards, where Equinox is planning its first hotel along with a health club, residential condo units and retail. On Billionaire’s Row, he and Childs have teamed up with developer Sheldon Solow to design a 52-story skyscraper with five floors of retail, 104 hotel rooms and 80 luxury condo units at 10 West 57th Street. (Solow, for his part, described Lewis as “terrific” and easy to work with. He also enthused about working with SOM again because one of the firm’s storied late partners, Gordon Bunshaft, designed the iconic Solow Building across the street at 9 West 57th Street in 1974.) He has also been involved with Brookfield Properties’ 5-million-square-foot Manhattan West project on the Far West Side, which was master planned by SOM and will include two office buildings, 844 apartments, 225,000 square feet of retail and public space.

Since becoming a managing partner at the 82-year-old firm four years ago, Lewis has tried to help push the firm in new directions. He got involved with the graduate research Center for Architecture Science and Ecology, which brings students from Rensselaer Polytechnic Institute to Industry City to develop sustainable building technologies, like solar panels and new kinds of air filtration systems. And he wants SOM to take on more urban design and environmental sustainability projects. To that end, it has submitted bids to work on the East Harlem Resiliency Study and the master plan for developing Sunnyside Yard in Queens.

“Frankly as the recession hit here there really wasn’t a lot of engagement with the city,” he said. “And then I sort of thought we really need to re-engage with the city and start to work with our friends at City Planning.” He added that while they were disappointed that they didn’t get the bid to deck over and develop Sunnyside Yard, the project was emblematic of what he hoped SOM would pursue. “I got to see the city in a way I hadn’t seen before and the potential and the future with one of those transformative projects.”