Rock ‘n’ Retail: As the Rockaways Roar Back, the Retail Market Isn’t Far Behind 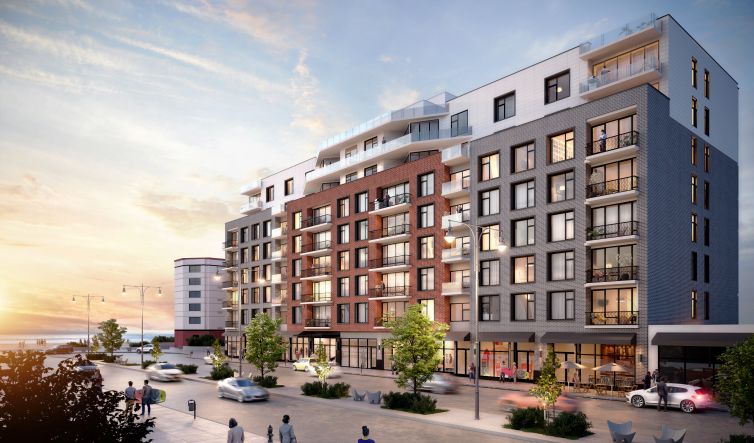 With the launch of the NYC Ferry service’s Rockaway route in May 2017, New Yorkers were granted a welcome new means of getting out to one of the city’s most far-flung neighborhoods—a convenient, comfortable commute to the Rockaway Peninsula’s beaches and the surrounding stores and restaurants.

But beyond providing weekenders with a fresh way to travel to the beach, the Rockaway ferry route has come to signify a new era for the peninsula that straddles the southern edge of Queens. With Superstorm Sandy, which devastated the Rockaways in 2012, now six years in the rearview mirror, public and private interests have intersected to spur a wave of development that promises to transform the area’s real estate market.

SEE ALSO: Developers Have Rediscovered Bedford-Stuyvesant. Can it Sustain the Boom?

And while much of that development is in the form of residential—whether affordable housing projects that are capitalizing on the Far Rockaway rezoning last year, or market-rate apartments seeking to lure new residents to the beachfront—it is the Rockaways’ commercial real estate market, and specifically retail, that is witnessing unprecedented growth.

“Typically, you need an influx of residential [development] first, and then the retail will follow,” said Stephen Preuss, a senior managing director at Cushman & Wakefield’s capital markets division. With thousands of new residential units either built or in the pipeline in the Rockaways, the neighborhood is “now seeing the infill of retail” follow, he said.

As Preuss noted, it would be unfair to characterize the Rockaways as one catchall area; the peninsula is split into different neighborhoods with varying traits, from the workforce housing and shopping centers of Far Rockaway to the bustling beachfronts off Rockaway Beach Boulevard in Rockaway Park.

It is the latter area that has arguably drawn the most attention due to its proximity to the NYC Ferry landing off Beach 108th Street and some of the Rockaways’ most crowded beaches. There, developers are eyeing new market-rate residential developments that represent a significant change for the neighborhood in terms of price point and profile.

Brooklyn-based Marcal Group is helming one of the most notable developments making waves in this regard—a new ground-up condominium development on Beach 116th Street just steps away from the sand. The mixed-use project, known as One Sixteen, consists of two buildings across the street from each other; Marcal broke ground on the first building, an eight-story, 86-unit property at 147 Beach 116th Street, earlier this year.

Marcal hopes to secure prices in the $600s per square foot for units at the building, a price point that Preuss said could prove to be “an important driver” for the neighborhood’s commercial real estate market. “If you’re able to sell condos in the Rockaways in the $600 to $700 per square foot range, that changes everything,” he said.

Indeed, the idea is that those sorts of prices will trickle down to the neighborhood’s retail market as retailers are drawn to the prospect of serving the area’s new residents and landlords are able to secure higher rents for their storefronts.

Marcal’s One Sixteen development, for instance, is set to feature around 30,000 square feet of retail space that hopes to attract a different caliber of retailer to the neighborhood. Jaime Schultz, a managing director at Lee & Associates NYC who is handling retail leasing for One Sixteen, said the project is a welcome change of pace to the traditional status quo of development in the Rockaways.

“Rockaway has always had a lot of developers that have come in and the city gives them all of these incentives if they do public housing, because that’s been the tradition,” said Schultz, a Rockaway resident who is on the board of the Rockaway Business Alliance. “A neighborhood like Rockaway really needs something like this. I’m thrilled that [Marcal] is doing market-rate condos.”

Schultz pointed to upscale food-and-beverage retailers like Cuisine by Claudette, a health-conscious café located next door to the Marcal project at 143 Beach 116th Street, as the kind of tenant that Marcal and other Rockaway landlords are hoping to attract more of (though Schultz noted that mom-and-pop apparel and crafts vendors are also increasingly carving a niche of their own in the area).

As for the retail rents that landlords can expect to procure in Rockaways, they vary according to neighborhood; Preuss pegged asking rents as generally being “in the low $20s per square foot on average,” with that number creeping up towards $30 per square foot for more desirable locations.

“I think everyone really wants it to be $40 [per square foot] but it’s not there yet,” Schultz said. She noted one retail vacancy at Beach 99th Street and Rockaway Beach Boulevard that was asking $35 per square foot but saw most of its bids come in below $30 per square foot. At One Sixteen, she added, Marcal is hoping to secure tenants at rents between $30 to $40 per square foot.

But despite the buzz over market-rate projects like Marcal’s potentially heralding a transformation in Rockaway’s demographics, the fact remains that the peninsula remains a workforce housing stronghold. With the city’s passage of the Far Rockaway rezoning last year, developers Phipps Houses and The Community Builders (TCB) are seeking to bring thousands of new units of affordable housing and hundreds of thousands of square feet of new retail and community space to the area concentrated around Mott Avenue.

“The goal is to reorient this neighborhood that was typically the commercial center of Rockaway,” Jesse Batus, a senior project manager at TCB, said of the developer’s mixed-use affordable housing project on a city-owned lot along Beach 20th Street. The 10-story, 224-unit building will feature 8,000 square feet of community facility space and 24,000 square feet of ground-floor retail that Batus said hopes to draw at least one restaurant tenant.

Nearby on the site of the largely vacant Far Rockaway Shopping Center, nonprofit affordable housing developer Phipps Houses is kicking off a massive, multi-phase project known as Far Rockaway Village that promises to bring 1,700 new units of affordable housing and roughly 100,000 square feet of retail across an eight-acre parcel. Phipps’ project will include an amenitized public plaza that is meant to draw foot traffic and facilitate “a downtown shopping district” that will create a sense of place for the complex’s residents, Phipps Houses President and CEO Adam Weinstein told Commercial Observer.

Weinstein described Phipps’ vision for the retail component as “a mini-mall with a very beautiful public plaza, which is meant to encourage people to walk off Mott Avenue” and survey the retailers who have set up shop in Far Rockaway Village. “Our objective isn’t just to build the housing—it’s to provide better shopping options along Mott Avenue for everyone who lives in Far Rockaway,” he said.

Among the tenants who have already committed to retail space at the development are a Food Dynasty supermarket and a Dunkin’ Donuts, Weinstein noted. He added that asking rents for the “prime” retail spaces at Far Rockaway Village could hit $50 per square foot, with those asks dropping for space “further off Mott [Avenue].”

L+M Development Partners is similarly seeking to build a sense of place through the retail offerings at its Arverne East project in the neighborhood of Edgemeer, which it is developing in partnership with Triangle Equities and the Bluestone Organization. The developers recently broke ground on Beach Green Dunes II, a 127-unit, 100-percent affordable building that represents the second phase of the project.

Sara Levenson, an associate director at L+M, noted that the property benefits from its proximity to the popular urban farm Edgemere Farm, while the developers have also partnered with the Campaign Against Hunger to open a café in the building’s 3,000-square-foot ground-floor retail space.

“The ability to have a farm around the corner and the café is a wonderful opportunity,” Levenson said. “We’re really doing some placemaking there and providing a need for local residents—a place where they can get healthy food and household goods.”

As developers are pouring significant resources into making the Rockaways a residential destination, it appears the commercial and retail real estate markets aren’t far behind. The neighborhood has come a long way since the devastation of Sandy, and its trajectory is only looking up.

“The economic snapshot of the Rockaways is stronger than it was pre-Sandy,” according to Justin Fitzsimmons, a research analyst at brokerage GFI Realty Services, which recently released a report on the effect of the city’s rezoning of neighborhoods like Far Rockaway. “I believe it can only get stronger with the introduction of new development.”