Chapter Two: Robert Knakal Explains His Plans at JLL and His Affinity for Numbers 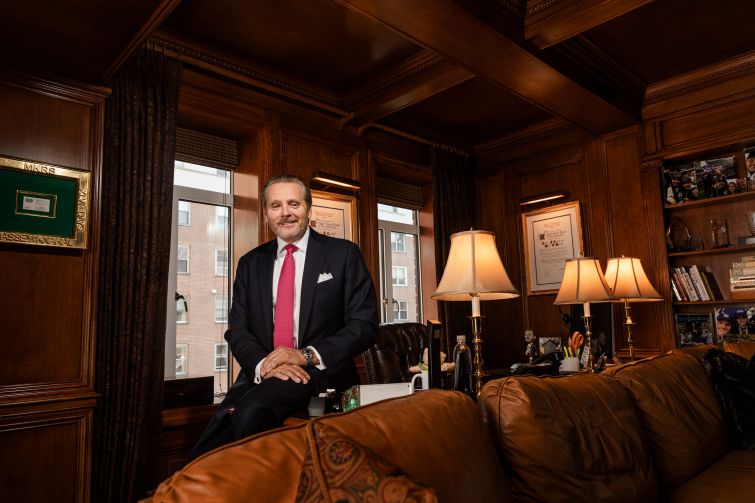 It’s all about statistics for Robert Knakal.

Amount he earns per working minute on a net take-home basis: $50.

Average price of sale he brokered in the last two years: $52 million.

Number of press mentions (including social media): 2,000 per year.

Number of columns written for Commercial Observer: 400 (and he has copies of each one).

Amount of time he worked at Massey Knakal Realty Services: 26 years and 46 days.

And those are just some of the numbers that rolled off Knakal’s tongue during an interview last Tuesday, less than three full days into his new gig as the chairman of New York investment sales at JLL.

The veteran broker has been in the stat business since childhood.

“I got into statistics as a young kid because my older brother Jeff was a baseball player and he got me into baseball,” Knakal, 56, said. “And I was a pitcher. He used to track my statistics for my Little League games—how many innings pitched, how many hits I gave up, how many walks I gave up, all kinds of things. And so I was a statistical nut my whole baseball career.”

That level of precision has helped the Upper East Side resident close more than 1,864 building sales valued at over $18 billion in his career, and bring in $20 million in gross commissions a year. And that’s a 34-year career that started at Coldwell Banker and includes co-founding Massey Knakal Realty Services in November 1988 and working as the chairman of New York investment sales at Cushman & Wakefield, after the firm purchased Massey Knakal for $100 million on Dec. 31, 2014. But that’s enough from us. Knakal can tell it better.

Commercial Observer: What is your focus at JLL?

Robert Knakal: We are going to be focused equally on the institutional market as well as the mid-market because those markets operate very differently. The institutional side of the business—over $100 million—tends to be more volatile so when things are very, very good in that market, they’re really, really good. From a revenue-generating perspective the middle market is much more consistent. But you want to be in the institutional space as well because those are transactions that are important for your track record and to show clients that you can handle those larger transactions.

And for the money.

And there’s the publicity.

Certainly the publicity and the notoriety from larger deals is excellent and that is another reason why you want to be doing those larger transactions.

At JLL you are working in partnership with Mo Beler, a managing director and head of investment sales in New York. Can you explain the dynamic?

I am senior and will be running the platform, but Mo will be my partner in that effort.

How many deals are you carrying over from C&W?

Why were you terminated at C&W?

You’d have to ask them that.

Why did you pick JLL?

Three reasons: firstly the brand. JLL has a storied history—about 250 years—the company has 300 offices in 80 countries and 82,000 employees so I believe that the access to investors and markets all over the world is significantly better than I’ve had at any time in my career.

Second reason is the culture. One of the things that I believe in very strongly, which is a concept that has been written about by the author Keith Ferrazzi, is co-elevation. And the theory of co-elevation is that disparate professionals working together can actually make each other better, but the two core principles that you have to have in order to achieve that co-elevation is transparency and communication and from everything I’ve seen the culture at JLL promotes transparency and communication.

Can you give an example of the transparency and communication at JLL?

No. 3, technology. I’ve looked at most of the technology that companies are using and that was a big part of what I was looking at when I was speaking to different companies around town and by far JLL has the best technology that I’ve seen. It is ideal in terms of its functionality for being able to execute sale transactions. And the company has demonstrated a very tangible commitment to continuing to focus on and invest in their technology suite.

Did you consider working with Paul Massey [his former partner who recently opened an investment sales brokerage, B6 Real Estate Advisors]?

Paul is like a brother to me, and I would consider anything that he mentions. But, at the end of the day, to start over again is not something that I was interested in.

Did you guys powwow before he decided to start B6?

We’ve had conversations regularly, and I still talk to Paul almost once a week and probably will for the rest of my career. As I said, he’s as close as a friend as I could have.

Rest of your career, not your life?

The reason I say that is I don’t plan on ever retiring, so I assume that the rest of my career will be the rest of my life. Come on, all I do is talk for a living and I love the business so why would you ever retire? I remember, back in the 1980s I was a member of the National Realty Club, and there was a broker Henry Baker that was there and he must have been in his late 90s and he was still brokering commercial deals. And he loved it.

Would you know what to do with yourself if you did retire?

I’m writing a couple of books now. I’d like to do more writing and certainly my top priority in my life is my wife and my 9-year-old daughter, Sophie.

Are these your first books?

What are they about?

One’s about Massey Knakal, and one is about selling.

From a general standpoint or real estate specific?

There have been a lot of copycats of Massey Knakal’s territory system. Where did the idea come from?

Well, it’s a very fundamental aspect of suburban residential real estate, except they call it farming, where an agent picks a section of town and walks up and down the streets, introduces themselves to everybody and gets to know the neighborhood better than anyone else. We really developed the territory system because of the acknowledgement we were in the information business, not the real estate business. And by spending all your time in a concentrated area, you get to specialize in that area, which enables you to differentiate yourself from everyone else who’s doing it and that creates a competitive advantage. So that’s why we were a small local popcorn stand of a company, but we sold four times the number of properties in the biggest, most competitive market in the world than any other firm.

You share so much information and tips in your columns. Do you ever worry you’re feeding the competition?

No, I think the reality is that knowing what to do and actually doing it are two very different things.

Let’s talk about the middle-market. What do you think of all of these new firms cropping up and the existing ones expanding?

The reality is there are 165,000 investment properties in New York City, not including Staten Island. The record year for sales was 2014 when 5,534 buildings were sold in the four boroughs. This year the market’s trending toward about 3,600, which is on par with last year, clearly down from 2014, but sale volumes have been dropping over the last three or four years.

It’s not bad. If you look at the average number of buildings sold [gets phone to use his calculator]—2.2 percent. If the market is on track for about 3,600 sales this year, that’s about 2.2 percent of the 165,000 properties. The average for Manhattan is 2.6 long-term. The average for the outer boroughs is 2.2 long-term. So, a year in which 3,600 properties sell, that’s about an average year over the last 34 years. All my data goes back to ‘84, when I started.

Pricing is down slightly from the peak.

What are the most recent deals you’ve done?

Who did you rep?

[Last year] I repped Watchtower [an entity of the Jehovah’s Witnesses] in the sale of two properties for them for a total of $680 million. That was 85 Jay Street, which was a development site where you could build about a million square feet, and 25-30 Columbia Heights, which was their approximately 1-million-square-foot headquarters building.

Who was the buyer?

The partnership between Kushner [Companies] and CIM [Group].

Did you always think you’d get into real estate?

No, no. I got into real estate completely by accident. I was a freshman at Wharton in 1981, wanted to be the next Gordon Gekko like every other Wharton [School at the University of Pennsylvania] kid. I grew up in Northern New Jersey so during spring break my freshman year I drove around dropping my résumé off at every commercial bank and investment bank I saw, wanting to get a summer job that would look good on my résumé and I was in Hackensack and I came out of a Paine Webber [investment company] office and across the hall I saw Coldwell Banker. I thought the place was a bank [laughs]. So I went in and dropped my résumé off. They called me to set up an interview the next day. This was 1981. There was no internet so I went to the library and when I found out Coldwell Banker was a real estate company I almost didn’t go on the interview, but they were the only ones that were hiring college kids for the summer. I went back my next two summers and then started with Coldwell Banker here in Manhattan when I got out of school in ‘84. I loved it right off the bat—loved the business, loved everything about it and that was serendipity kicking in when I thought Coldwell Banker was a bank.

What do you do in your free time?

Spend as much time with Cynthia and Sophie as I can.

Playing board games, watching sports, we travel for sports. My daughter is the son I never had. She’s an absolute sports nut. She loves to play sports including ice hockey, loves to watch sports including hockey, baseball, football, basketball.

Your wife’s into it, too?