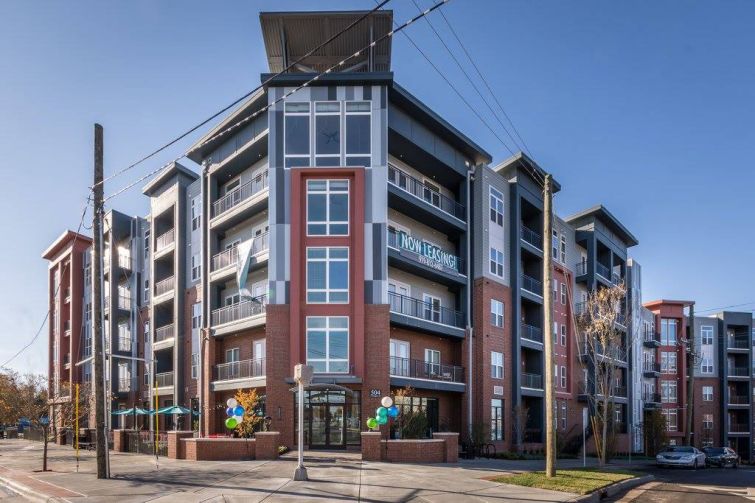 Terms of the financing were not disclosed, nor was the final sale price. Toronto, Canada-based H&R REIT—the parent company of Lantower Residential—announced in its second quarter earnings report that its subsidiary purchased the BullHouse community for $76.3 million before transaction costs, which suggests a loan-to-value of 65 percent.

“We are seeing more and more activity in the pre-stabilized multi-housing space both with acquisitions and refinancing,” HFF Senior Director Jamie Leachman said in a prepared statement. Leachman went on to say that New York Life provided Lantower with favorably competitive terms in order to sell the debt placement. Leachman worked with fellow Senior Director Roger Edwards to arrange the financing.

Occupancy at the 305-unit property—located at 504 East Pettigrew Street in downtown Durham—was three basis points over 40 percent at the time of Lantower’s acquisition and had  grown to just under 48 percent by June 30, according to information from H&R’s second quarter earnings. H&R indicated that it expects the property’s occupancy will have stabilized by March 2019.

The complex can benefit from its proximity to the city’s major thruways and downtown Durham. It sits just a short walk away from the Durham Performing Arts Center as well as the Durham Bulls Athletic Park, the stadium development that houses Minor League Baseball’s Triple-A Durham Bulls.

The property’s amenities include a yoga room, a heated salt water pool, a self-serve bike shop and bike storage, a spa room, a 24-hour fitness center, a rooftop terrace, a local art gallery, with purchasing options and an outdoor kitchen, with grills, among other services. Monthly rents at the community range from $1,220 for studios to $2,970 for three-bedroom units, according to the community’s website.

H&R announced in May 2018 that it would sell 63 U.S. retail properties for close to $810 million and reinvest the proceeds into its Lantower Residential division.

Along with its acquisition of BullHouse in June, Lantower also purchased a 322-unit multifamily property at 15175 Integra Junction in Odessa, Fla. for $57.7 million, according to H&R’s second quarter earnings. The property—called Lantower Asturia Apartments—was built in 2017 and was just over 86 percent leased at the time of the acquisition.

A spokeswoman for New York Life declined to comment on the transaction. Officials at Lantower Residential could not immediately be reached.