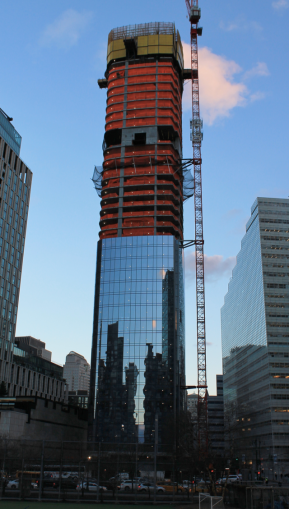 The nearly $500 million construction loan on 111 Murray Street has been resized following the sale of a condominium apartment—revealing, in the process, that Goldman Sachs chipped in $275 million last spring to refinance the property, New York City Department of Finance records show.

The original construction financing for the tower, a $445 million loan from a posse of lenders including M&T Bank, Deutsche Bank and Blackstone Real Estate Debt Strategies was refinanced first in Nov. 2017 with a $650 million Blackstone loan that also added condominium inventory financing, The Real Deal reported at the time. Now, after the sale of some of the building’s condominiums, the remaining construction debt sums to just more than $430 million, property records show.

The 58-story tower, blocks from the World Trade Center between West Street and Greenwich Street, finished build-out earlier this year. Ten apartments are on the market, ranging from $2.5 million for a 14th-story 1-bedroom to $40 million for a 7,500-square-foot penthouse, according to the building’s website. A troika of developers consisting of Witkoff Group, New Valley Real Estate and Fisher Brothers teamed up to build the 156-apartment structure, one of the tallest residential skyscrapers in the city.

Newmark Knight Frank‘s Dustin Stolly and Jordan Roeschlaub have brokered financings for the building throughout its construction and sales period. In an email, Stolly noted that “when the building opens, [the debt] will be paid down quickly via condo sales.” Steven Witkoff—Witkoff Group’s founder—and spokespeople for Blackstone and Goldman Sachs did not respond to inquiries.

Michael Cohen, the Trump Organization lawyer who pled guilty last month to fraud and campaign-finance charges, bought an apartment in the building in July that he has since listed for sale, according to The Real Deal.