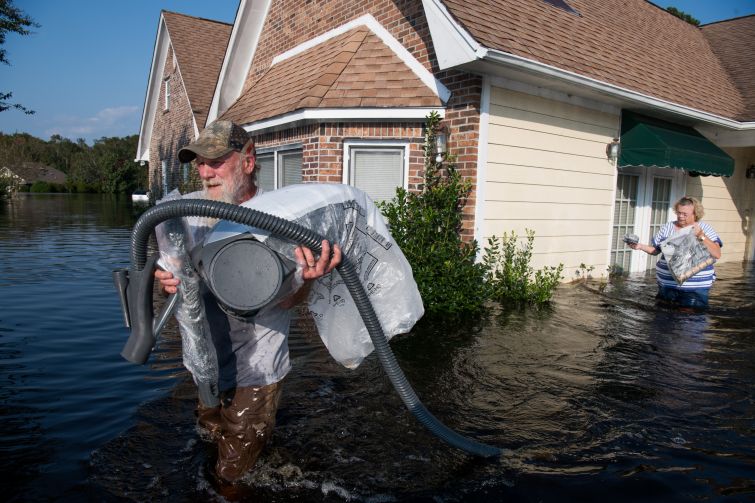 A man in Longs, S.C. helps remove valuables from a friend's house amidst flooding from Hurricane Florence. Photo: Sean Rayford/Getty

Despite warnings beforehand of a once-in-a-generation tempest, Hurricane Florence stands to cause little lasting damage to coastal commercial mortgage-backed securities financings in the South Atlantic region, according to analysts at credit-rating agencies.

Although initially labeled a potentially devastating event by government officials, the storm’s actual path through the Carolinas put at risk about $1.5 billion worth of commercial properties backing mortgage bonds, only 0.2 percent of America’s CMBS market, as per analysis from Morningstar Credit Ratings.

“I’m not trying to downplay the disaster, but the good thing about this storm is that it didn’t hit any major metropolitan areas,” Morningstar analyst Steve Jellinek said. “It hit Wilmington [N.C.] hard, but it spared larger cities like Charleston [S.C.] and Myrtle Beach [S.C.]”

After gaining strength over the Atlantic Ocean for days, the storm made landfall near Wrightsville Beach, N.C. as a category 1 hurricane on September 14 and lingered inland through last weekend. Governors in six states and the mayor of the Washington, D.C. declared states of emergency as Florence’s wind and rain flooded streets and caused widespread blackouts. Officials have blamed the storm for 42 deaths so far.

Nevertheless, although it’s too early for a comprehensive tally, analysts expect that the storm will have left only a minimal impact on CMBS properties in the affected areas, because underwritings bound for securitization tend to be well insulated against natural disasters.

“The exposure really drops off quickly,” he said.

Two deals from Freddie Mac and one from Credit Suisse harbor the deepest exposure to properties in affected parts of the Carolinas, Morningstar found. FREMF 2018-KL2P, a new deal issued this year, headlines the exposure list, containing five properties worth $118 million in the region hit by Florence. FREMF 2014-KX01 and CSAIL 2015-C4 round out the top trio, with $40.9 million and $38 million exposures to storm-tossed climes, respectively.

Harvey and Irma each exposed roughly 20 times as much CMBS stock to damage near Houston and the South Florida coast, but even losses from those storms were slight, Jelinek said. Still, Carolina borrowers afflicted by Florence who are unlucky enough to be searching for refinancings this autumn may receive a soggy reception.

“If a property goes offline, it’s hard to get refinancing for a loan not producing any cash flow,” Jelinek observed.